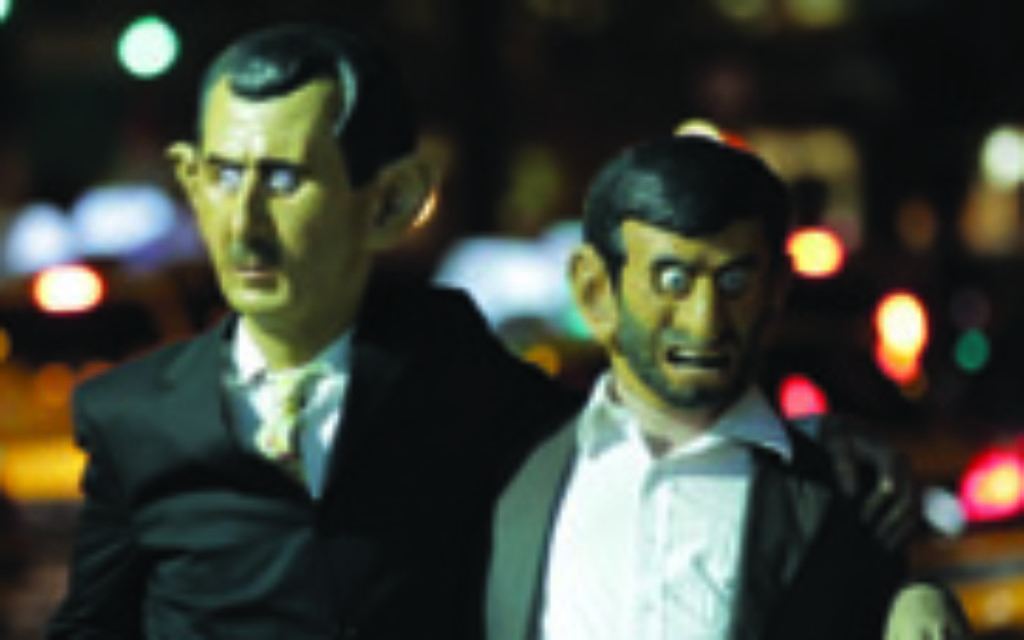 It gives new meaning to the Axis of Evil.

But before the nuptials on a street overlooking the United Nations, guests at the “wedding” were slated to see the two men (wearing custom-made masks of the rulers) in a hip-hop music video being thrown out of a gay bar on the Lower East Side by patrons aware of Iran’s persecution of homosexuals, riding in a horse-drawn carriage through Central Park and walking through Chinatown.

No, this bit of street theater is not the work of some fringe group trying to grab the headlines with outlandish skits. Instead, it is the work of Iran 180, an umbrella group started with the help of the Jewish Community Relations Council of New York and that includes the American Jewish Committee, the Anti-Defamation League and UJA-Federation of New York.

Chris DeVito, the group’s outreach director, said the sketches play off the notion that the “two regimes have been ‘in bed together’ for decades.”
He cited the fact that for years Iran used Syria as a conduit through which it sent arms, operational expertise and money to the terrorist group Hezbollah in Lebanon. And DeVito pointed out that Iran has reportedly sent its own police and military to help Assad quell months of anti-government demonstrations throughout Syria.

“We decided it was time for them to make their bonds official in an ‘only in New York’ same-sex marriage ceremony,” he said, adding that the effort is designed to resonate with the city’s gay community.

“The farce is intended to poke fun at Ahmadinejad’s ludicrous statements about the absence of homosexuals in Iran,” DeVito said, pointing out that earlier this month three men were hung in Iran after being found guilty of charges related to homosexuality.
“We’re trying to raise awareness about the ongoing abuse and persecution of the homosexual community in Iran, something that resonates particularly in New York,” he added. “There are many potential allies for our cause who have not been reached, partially because they don’t understand the true nature of the regime in Iran. We think there are plenty of communities who would be more concerned about Iran if they were aware of how they would be treated there.”

“We will have a model nuclear weapon on site, and a large clock intended to symbolize the imminence of a nuclear-armed regime in Tehran,” DeVito said. “In addition to our street theater performances, we will have a series of Iranian dissidents, human rights activists and concerned American citizens speak about specific abuses perpetrated by the Iranian regime. These speakers will humanize the victims of the Iranian regime, and give voice to those who cannot speak for themselves.”

Although not all Jewish leaders in the Iran 180 coalition were aware of the nature of the street theater, those interviewed embraced it when contacted by The Jewish Week.

Michael Miller, CEO and executive vice president of the JCRC, said it is important to speak out against Iran’s human rights record “to expose Iran as a violator of women, children, Jews and other minorities and homosexuals.”

John Ruskay, executive vice president and CEO of UJA-Federation of New York, said Iran’s “nuclear program is a threat to Israel, and we applaud all efforts to mobilize awareness of the threat of a nuclear Iran and the violations of human rights that take place daily.”