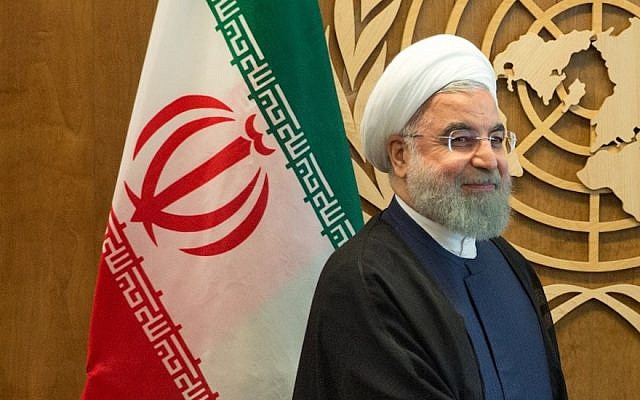 The crisis in U.S.-Iran relations continues to escalate. Washington holds the Islamic Republic responsible for attacks on two oil tankers in the Strait of Hormuz and is dispatching an additional 1,000 troops to the region — 1,500 troops were sent in May — for surveillance of Iran’s actions. And Tehran is threatening to enrich more uranium than is allowed by the 2015 agreement limiting its nuclear development program. These are unsettling reminders of how real threats and purely political factors can get entangled in ways that make solutions extraordinarily difficult.

It’s indisputable that Iran, with its ongoing quest for regional hegemony, support for terror groups committed to Israel’s destruction and alleged nuclear weapons program, represents a significant threat to the Jewish state as well as critical U.S. interests. But what to do about it?

Prime Minister Benjamin Netanyahu champions the hardline approach to Iran, putting him in sync with President Trump, who unilaterally pulled the U.S. out of the nuclear agreement and imposed stiff new sanctions meant to cripple the Iranian economy and curtail the terrorist actions of the Islamic Revolutionary Guard. Clearly, Iran has suffered from the financial pressure. But that doesn’t necessarily translate into sending its leaders to the negotiating table. They appear, instead, to be doubling down, taking provocative moves, at least in part to frighten the European partners to the nuclear deal in hopes that they will not withdraw from it. Critics of the deal say this is a good time to call Iran’s bluff and take military action in response to the tanker attacks.

However, much of Israel’s own defense and intelligence establishment and many U.S. counterparts advocate a more cautious approach, arguing that a nuclear agreement and efforts to use carrots as well as sticks in dealing with Tehran are much preferred in a world of imperfect and risky options.

There are those in the Trump administration, chiefly National Security Adviser John Bolton, who view crippling sanctions and new threats of military action as vital for U.S. interests and for protecting Israel. But critics fear the actions of a president whose rhetoric and views in dealing with potential nuclear crises like those in Iran and North Korea fluctuate between images of a threatening fist and an open embrace. These are issues that call for consistency and strategic thinking, not for playing chicken with an adversary who has the potential to wreak untold destruction.

The volatile Middle East offers many textbook examples of the law of unintended consequences. A military confrontation with Iran may ultimately prove unavoidable, but it will inevitably have wide-ranging, difficult-to-predict and potentially dangerous consequences for America and for a vulnerable Israel.

The goal of U.S. policy must remain the same: preventing Iran from going nuclear and limiting its ability to sow violence and disruption throughout the region. But that won’t be easy and it won’t be accomplished through reflexive escalation. It will require a disciplined, well-reasoned policy and diplomatic efforts that can help persuade Europe to partner with the U.S. Together they may be able to convince the mullahs in Iran to come back to the negotiating table and produce a realistic deal that improves Iran’s economy and ends the imminent threat of war.