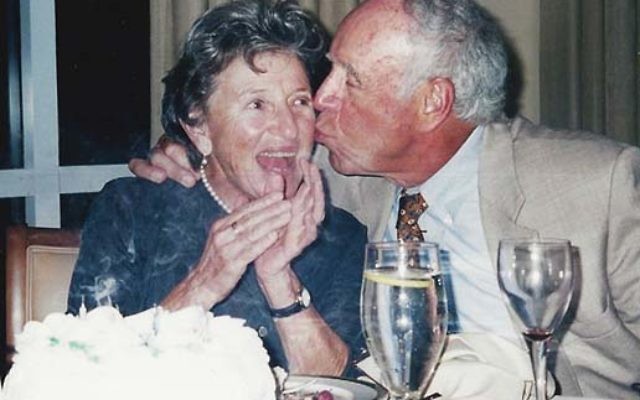 My mother had four other Muriels in her class in junior high. It’s a name of its era. With few exceptions, any other Muriel I met has been a year older or younger than my mother. The name is of Gaelic origin and was common in medieval England and again in the mid-19th century, then picked up in the U.S., peaking in the early 1920s especially, it seems, in the Bronx.

Our Muriel passed away just before Mother’s Day last year. When my father died six years ago, we were given an American flag for his service to this country — he served in the Navy in World War II and was an exemplary member of the Greatest Generation. My mother and the other Muriels and friends with other names we rarely hear anymore, like Bernice and Mildred, were also, in their way, the Greatest. In the years following World War II, they used their creativity, determination and smarts to build families, homes and communities, several parkway exits and worlds away from the immigrant enclaves where they grew up.

In the American wing at the Metropolitan Museum, there’s a new exhibit called “Sara Berman’s Closet.” Born in Belarus, Sara Berman is the late mother of artist Maira Kalman. Four years older than Muriel, Berman grew up in Israel, moved to the U.S. in 1954 and in her last years lived in a studio apartment in Greenwich Village. Her possessions were spare and well-chosen, and her all-white wardrobe is exhibited in the museum’s reproduction of her perfectly arranged closet.

I thought of my mother in the neat creases of Sara Berman’s piles, where every garment is folded identically to the one underneath it, stacked with an architect’s sensibility. My mother folded a fitted sheet by hand to make it look like a flat one; she had a pedal-operated machine in the basement for pressing linens — it looked similar to one at the local Chinese laundry and I haven’t seen one anywhere else. Every morning, she read The New York Times, cover to cover, folding the broadsheet lengthwise in half and opening it in quarters, with the hand of an origami artist.

While my mother’s closet was well-ordered like Sara Berman’s — it looked like a shop before the shoppers arrived — it was also full of color and her own style. Still, everything had its place, like the shoes stacked in individual Plexiglas boxes.

My mother could have taught Marie Kondo how to fold. Her abilities to fold and to organize space were a form of love, a way to preserve order and also to create beauty. Folding, by nature, is transformative; a square becomes a rectangle, an irregular-shaped item becomes symmetrical. My parents’ table folded open to welcome more guests.

Even her baked goods were perfectly formed, and like her jam-and-nut filled rugelach, shaped with military precision. Hers wasn’t a static perfectionism; whatever she learned to do, she did really well, nor did she shy away from new things.

She had high standards, a low golf handicap and a great deal of personal warmth. Perhaps, she was the only person in American who played 18 holes of golf and later made gefilte fish — each piece the same size — from scratch. She drove fearlessly, and in the 1960s loved her apple-green Thunderbird.

While she believed that there was a right and wrong way to stack towels, she was open and neither rigid nor judgmental in her views of the world, nor of our choices. She listened with a wide-open heart and generous spirit. From order sprung exuberance. I just liked being around her.

My mother’s father was a tailor, and he made her stunning dresses, modeled on magazine photographs. She sewed beautifully too. Her sewing machine was shipped off to Haiti, to a young woman who sews for her family, the sister of the angel who took care of my mother in her last years. The ironing machine is long gone.

Clothes are always about more than clothes. My mother was, in the words of the psalms, “robed with strength and grace,” a text we chose for her gravestone. As she remembered less and less, and spoke less and less, she’d still notice something out of place, and at times she’d neatly fold any papers within reach.

When I read Jim Moore’s poem, “Love in the Ruins,” on a New York City subway, I knew that his mother must have been my mother’s age. He writes, “I remember my mother toward the end, / folding the tablecloth after dinner / so carefully, / as if it were the flag / of a country that no longer existed, / but once had ruled the world.”

My father’s American flag — I like to think it belongs to both of them — is in our home, formed into a perfect triangle as when it was presented in a military ceremony, as though my mother had folded it herself, with love.

Sandee Brawarsky writes about books and the arts for the paper.