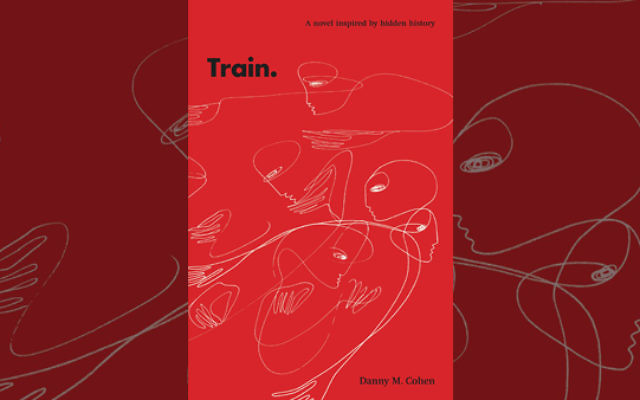 Danny M. Cohen is the author of “Train” published in January 2015. "Train" is a historical thriller about six teens trying to survive Nazi Germany. Cohen, pictured below, is a learning scientist, fiction writer and education designer. He is an assistant professor at Northwestern University and founder of Unsilence Project, a non-profit that creates and delivers engaging learning experiences about hidden, marginalized and taboo narratives of atrocity and human rights. (Photo: Courtesy of United States Holocaust Memorial Museum.)

Read Avigial’s review of “Train” on Fresh Ink For Teens.

How long have you been writing?

Oh gosh, hard question, because it all depends on where you want to count from. As a kid, if you'd asked me what I wanted to be when I grew up, I'd say I wanted to be an author. I remember writing stories — sci-fi stories mostly — when I was in primary school. In graduate school, I started to write more formally, focusing on Holocaust education. My work as a serious fiction writer developed only recently.

Was there any particular event or person who inspired you to write “Train?”

I didn't intend to write “Train.” I didn't say, “OK, I'm going to write this novel about this part of history.” I started off trying to create education programs for classrooms to help teachers teach about these hidden, marginalized narratives of Holocaust history. But teachers found my programs to be very dry and encyclopedic. They asked if I had any novels or films I could recommend. They were already using fiction — “Number the Stars,” for example — because fiction can be great for raising difficult questions about history. So I named some very specific books and movies and they said, “We don't have time for one book about Roma, and one book about homosexuals and one book about the disabled.” And there really wasn't any book or film I could recommend that included all these victim narratives, so I said to them, “Let me see what I can do." And I started to write a series of short stories. And these stories turned into “Train.” Suddenly I was writing a full novel and once I realized that I was writing a novel, I was very happy to continue writing, because I was really enjoying the process of writing historical fiction.

(Spoiler Alert) Why did you end your book he way you did? Personally, I'd like to know more about what happened to Ruti. Why aren’t we left with a clue about where she ended up?

I know what happens to each character by the end of the war. The book is set in early 1943, so there are still a couple of years until the end of the Nazi era. I wanted the reader to be left with questions, so the teacher could turn to the class and say, “Now we know where Marko and Tsura and Elise are, where we've left them, let's think about what would have happened to the real people of history in those situations.” The students can go online and onto [websites like] the Holocaust Encyclopedia and look in history books and find out what would have happened to these different characters at the end of the war and beyond. In a way, the readers, the students, transform into historians and investigators of history. That's my goal; that's why the ending, as you said in your review, doesn't feel like an ending. Hopefully there's a sense of closure of some kind, that I tied up some ends, but the big historical ideas are left open to the readers so that if they're in the classroom they can work together and figure out what might have happened next or what happened to the real people of history. The ending of “Train” forces the reader to take the fictionalized world I've written into the real world, into the reality of history.

If you could share only one message through your book, what would it be?

First of all, it's really up to reader to take her or his own message away. But to answer your question, I think if there was one message people could learn it would be that when anyone is caught up in an atrocity, that person is always faced with extremely complicated choices and our role can change depending on the context. So sometimes we make mistakes when we think about the Holocaust and genocide; we like to put people into boxes — say these are the victims, and these are the perpetrators and these are the collaborators —  but we see in “Train” that some people in minorities hold prejudices toward other minorities. Perpetrators are complicated humans as well. And victims sometimes fit into multiple victim categories. Now someone like Elise: she's from a Nazi family, her dad is fighting in Stalingrad, her mother is a Nazi sympathizer, she herself is a member of the Nazi Girls' League, but we find out that her brother was murdered because of his disability. And so we're forced to reposition how we think about Elise and her family — are they perpetrators, are they victims, are they both or are they something else?

Any advice for young writers?

A lot of people say, “Write what you know.” I don't think that's necessarily true. I think we should write what we want to know. We should write about something about which we have many questions. I wrote “Train” without really knowing where the story would take me. There were certain questions I wanted to answer about the connectedness of prejudice and the connectedness of victimhood and the connectedness between the choices we make and the realities that are forced upon us. I didn't necessarily know the answers to all of these questions, so maybe I wrote “Train” to answer those questions.

Some of my readers don't realize until the end, until they get to my author's note, that every public event that happens in the book actually happened in history. I had one reader say, "It doesn't sound very possible that Nazi roundups of Jews happened at exactly the same time as the Nazi deportations of the Roma, and while the Nazis were arresting homosexuals and murdering disabled people.” So even though the plot can feel overwhelming and maybe even far-fetched, that's how history happened — that's how it played out. The characters of “Train” may be fictional, but they're all based on real historical accounts. I had to figure out where I wanted to tell my readers about the historical truth: should I reveal it at the beginning of the book or wait until the end? I chose to allow the reader to fall into the story and wait until the end to tell the reader that it was based on real history.