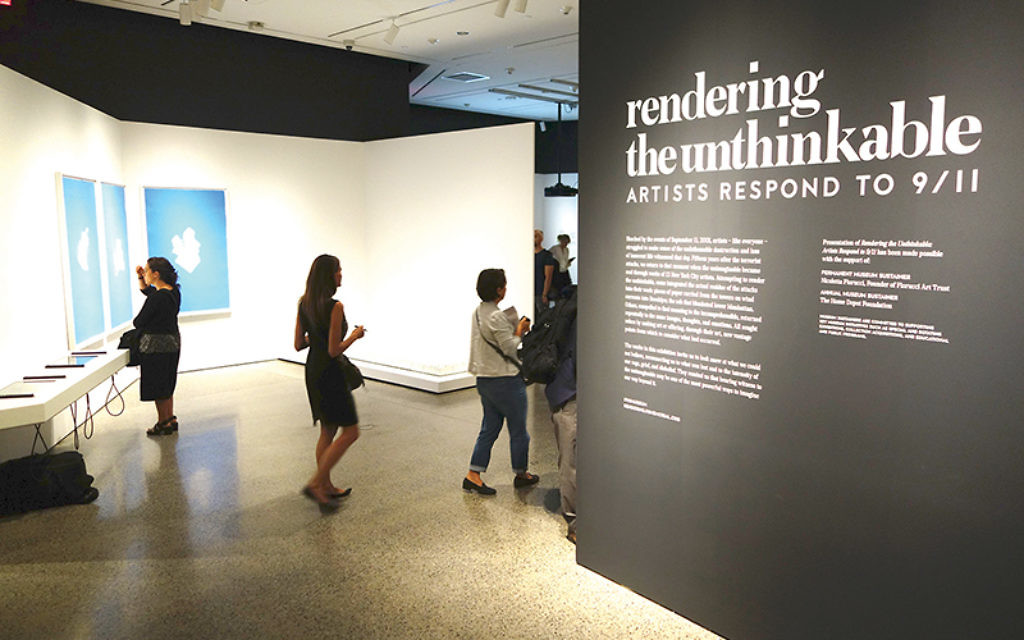 In the aftermath of the collapse of the Twin Towers, Donna Levinstone, a New York-based artist and teacher at the National Council of Jewish Women, took a hiatus from her work for three months, describing herself as “too upset” to concentrate on her art.

Tobi Kahn, the son of Holocaust survivors, who witnessed the attacks from the roof of his loft in Long Island City and whose work often focuses on themes of loss and commemoration, likewise turned down an invite from the Educational Alliance to create a “meditative space” exhibition on the subject.

Now, on Sept. 12, Levinstone and Kahn will be among the 13 artists participating in a new exhibit at the National September 11 Memorial Museum to mark the 15th anniversary of the attacks. The event marks the first time the site, opened in May 2014, will host a special exhibition alongside its permanent historical exhibit.

The museum’s president, Joe Daniels, noted the milestone, and added, “When the idea was first proposed about how are we going to use our special exhibition space for the first time, art done by really amazing, thoughtful and passionate artists really struck a chord with all of us.”

Daniels has been in charge of the memorial site and museum since 2005, long before they were ready to be unveiled to the public. In the five years since the memorial plaza was unveiled, on the 10th anniversary of the attacks, an estimated 28 million people have visited the site. The museum has also been a success since its launch, attracting over 7 million people through its doors in a little over two years.

Part of the challenge of any historical museum, explained Daniels, is to keep it relevant, to give people a reason to come back and get new perspectives and views. He highlighted the example of a recent visit by a New York Little League team to the museum, none of whom were born yet on September 11th, 2001, as a reminder of “our deep responsibility to tell the story of what happened.”

“Rendering the Unthinkable” is the first step into new territory for the museum, with the promise of more exhibitions exploring the history of 9/11 and its effect on contemporary issues to follow. Part of the team helping ensure the new phase goes smoothly is museum director Alice Greenwald, who has held similar roles at the U.S. Holocaust Memorial Museum in Washington, D.C., and at the National Museum of American Jewish History in Philadelphia. She described the exhibition as offering “another way” to remember the events, by “seeing it through other people’s eyes, into their hearts and their minds, by way of the works of art these individuals felt compelled to produce in the aftermath of the attacks.” She acknowledges the individuality of the pieces, “each of them powerful in their own right,” but believes that together, “they seemed to be in conversation with one another.” The exhibition space itself is “intimate and spare, a space for reflection and contemplation” in contrast to the “dense, detailed and documentary” focus of the permanent exhibition.

When Levinstone returned from her three-month hiatus, the 9/11 series was her first project. There are ten paintings in the series, with one of them, entitled “Eternal Rest,” selected by the curators to participate in “Rendering the Unthinkable.” Despite the violence and horror of the event it depicts, Levinstone insists the work “also has a calming element; there’s a serenity there in some strange way.” The loan of "Eternal Rest" to the exhibit is until January 2017, when it will be replaced by two other paintings from the series.

When she originally conceived the piece, she describes how she was inspired by the story of Exodus, “how God came in a cloud of smoke to guide people.” Levinstone saw a parallel between the two stories, and transferred that to her piece.

Tobi Kahn’s piece, entitled “M’ahl,” is a work in remaindered wood taken from his workshop. The installation is designed to recall the New York skyline from Windows of the World, the restaurant at the top of the North Tower that his parents used to take him to as a child. Kahn was a natural fit for this exhibition, as shrines and commemoration are at the heart of much of his work.

Yet when the Manhattan-based Educational Alliance first approached him in 2010 with the idea of transforming a space they had into a “meditative gallery,” he turned it down. Kahn described himself as “shell-shocked” and too emotional to take on the piece. He eventually changed his mind and dropped everything, working on the space, of which “M’ahl” was the centerpiece, for nine months. It is composed of 12 separate units, each of which was given to different people at the conclusion of the exhibition, on the proviso that every few years they could be collected together for exhibition, as they are now.

As with Levinstone, Kahn took inspiration from his Jewish background. “M’ahl” is all in white, the color of the burial shroud in Judaism as well as the one worn on the High Holidays, and divided into 12 units that were designed to work together, evoking the 12 Tribes of Israel. The color of the conceptual piece was born of a desire to create something on the idea that “on 9/11, all the buildings mourned.” It was also reminiscent of the white dust and ash that covered people who walked away from downtown on that day, according to Kahn.

The exhibition features works in a variety of mediums, including paintings, sculptures and multimedia displays. It opens to the public on Monday, Sept. 12, the day after the 15th anniversary of the attacks.


Eds. Note: An earlier version of the article incorrectly stated that the "Eternal Rest" pastel consisted of three separate pieces in a series of eight. It has been corrected to note that it is one piece in a series of ten. Also, it incorrectly stated that Tobi Kahn's loft was on the Upper West Side, and has now been corrected to state that it was in Long Island City.