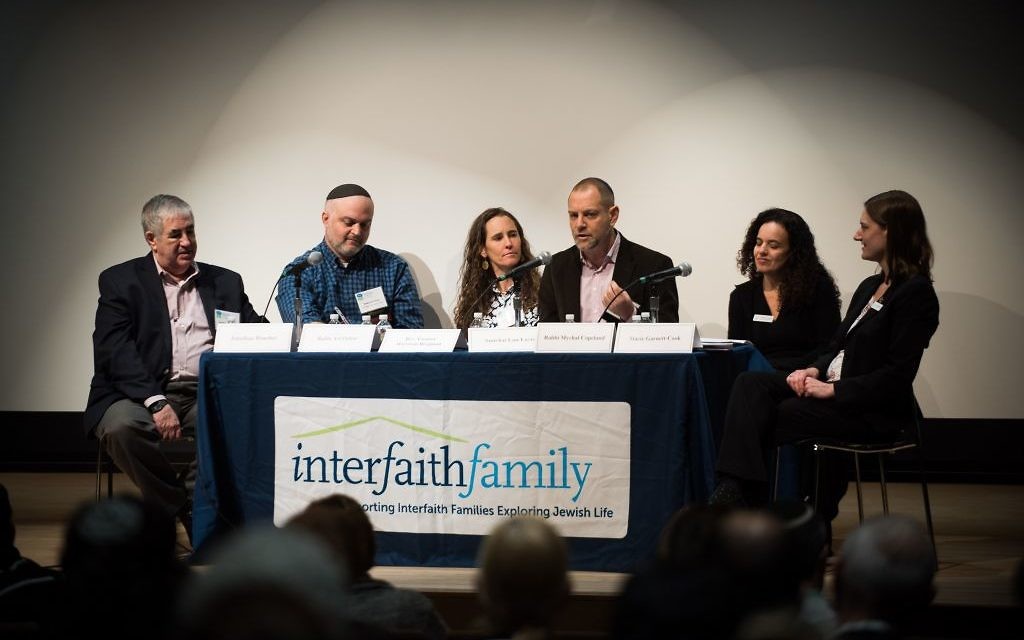 History was made last week in Philadelphia in the controversial area of Jewish intermarriage.

At the National Museum of American Jewish History, representatives of such prominent organizations as Brandeis University and the Pew Research Center discussed the results of their latest studies on the topic – but the historical aspect was not what the experts said, but who was listening.

“It was only possible to have a gathering like this in the last few years,” said Ed Case, the founder of InterfaithFamily, who now serves as a consultant. “It’s now in the mainstream.”

He pointed to two prominent Jewish organizations — Jewish Federations of North America (JFNA), the umbrella group of local federations in the U.S. and Canada, and the Jewish Funders Network, a major philanthropic supporter of Jewish ventures – as partners in organizing the conference.

The summit’s theme was “Embracing the New Jewish Reality,” and participants in a series of panel discussions that emphasized various ways to “engage” interfaith families reflected that theme, Case said.

“There’s greater interest in the issue. There’s greater acceptance,” outside of Orthodox circles, that uniformly view intermarriage as a negative phenomenon that violates Jewish law and Jewish tradition, he said.

The summit grew out of a small-scale event, which featured several panels about the Jewish community’s approach to intermarriage, which was held in Boston last year to mark Case’s retirement from his full-time leadership of Interfaith Family.

“We were really struck by the reception” to the panels, said Jodi Bromberg, CEO of InterfaithFamily. “People seemed anxious in discussing what was needed in engaging intermarrieds in Jewish life.”

“It’s the new Jewish reality,” she said – statistical and anecdotal evidence shows that the intermarriage rate in the Jewish community is steadily growing, now about 70 percent outside of Orthodox Jews. “It took funders being ready to fund an initiative like this. This is the moment in time to begin a large-scale, national conversation.”

Jews are not alone in facing a growing intermarriage rate.

Alan Cooperman, the Pew Center’s director of religion research, discussed at the summit the finding of a new study, that one-in-five adults in this country were raised by parents who came from different religious traditions — either an outright intermarriage, or a union where one partner is religiously unaffiliated.

“The issue – the problem – of intermarriage is by no means limited to Jews, or even greater among Jews,” Cooperman said. “It’s a matter of concern to many religious leaders.”

The conference, which will probably become biennial, drew “more people than we expected,” Bromberg said.

It was the latest sign of an increased openness to intermarriage among many Jewish leaders at a national and local level.

In the millennial generation, born in the period from the early 1980s to the early 2100s, most Jewish men and women are the children of intermarriage.

Anne Goodman, a church-going Catholic, and her husband, Sam, raised in a Reform Jewish family, said they were welcomed into the Reform congregation in the Philadelphia area they joined after their marriage two years ago. “They really accepted us,” Anne said. The majority of the young couples in that congregation are intermarried, said Anne, who participated in last week’s Interfaith Family conference.

Encouraged by the congregation’s open attitude, the couple is raising its 9-month-old son Jack (Yaacov is his Hebrew name) as Jewish planning, to enroll him in a Jewish school when he becomes of age, and regularly attending Friday night worship services and holding a Passover seder in their home.

Anne said she is an active member of the congregation’s sisterhood, and was invited this year to join its board.

“Intermarriage is demographically driven,” said Rabbi Kerry Olitzky, executive director of Big Tent Judaism (formerly the Jewish Outreach Institute), which works to “create a warmer and friendlier community for those on the ‘outside.’”

“Some of the things that we have been affirming for 10-15 years have become mainstream,” he said. “The bottom line for the community is that intermarriage is an opportunity [to welcome new members] — it’s not a problem, it’s not a challenge.”

Intermarriage has “impacted a growing number of American Jewish communal leaders,” said Rabbi Olitzky, who participated in the summit. “They are becoming more responsive to it.”

In other words, Jewish leaders whose family members who have intermarried are less reluctant to summarily condemn the practice.

While Orthodox Judaism opposes intermarriage, and the Conservative movement’s Rabbinical Assembly bans its member clergy from officiating at intermarriages, many Conservative rabbis in recent years have expressed a willingness to take part in a marriage where one partner is not Jewish.

According to a survey conducted a year ago by Big Tent Judaism, almost half of Conservative rabbis have defied the movement’s ban, and 40 percent said they would officiate at intermarriages. And Rabbi Seymour Rosenbloom, who retired recently after serving 36 years as spiritual leader of Congregation Adath Jeshurun in Elkins Park, Penn., a Conservative synagogue, wrote in a JTA essay earlier this year that his movement’s “leadership must drop its ban … before it’s too late. … It is counterproductive if we are trying to influence Jewish souls and bring them closer to the Jewish community.”

A study in Boston’s Jewish community a decade ago, an area whose Combined Jewish Philanthropies has supported programs to reach out to interfaith families, found that 60 percent of the children of intermarried couples were being raised as Jews.

But skeptics aren’t hard to find. “Other cities came up with the same kind of numbers,” said Steven M. Cohen, research professor of Jewish Social Policy at Hebrew Union College-Jewish Institute of Religion, who in an essay published last week in the Forward critical of the trend that welcomes intermarriage, wrote that “intermarriage in one generation stimulates intermarriage in the next … the data still points to dramatic demographic losses over the generations owing to intermarriage.”

Leonard Saxe, director of Brandeis University’s Cohen Center for Modern Jewish Studies and director of the school’s Steinhardt Social Research Institute, presented at the summit the results of a new study that found the importance of a rabbi or cantor serving as the sole officiant at an intermarriage.

The affiliation and identification rate of intermarried couples who have only a Jewish officiant at their marriage approaches that of “in-married” Jewish couples, Saxe said.

According to his study, “Under the Chuppah: Rabbinic Officiating and Intermarriage,” based on a survey of 1,200 married young adults who had taken part in Birthright Israel programs, “most couples who engaged rabbis for officiation purposes appear to have Jewish commitments that carry over past the wedding ceremony.”

“If the rabbi accepts them, engages them in discussion” in the period before the wedding, “it opens the door to engagement,” Saxe said in a telephone interview. “The whole process brings them closer to Judaism.”

Ed Case of InterfaithFamily said he will probably notice the increased acceptance of intermarriage at the JFNA’s General Assembly in Washington, Nov. 13-15.

At the gatherings 10-15 years ago, both “would get dirty looks,” Case said. “People wouldn’t want to talk with me.

“That doesn’t really happen anymore,” he said. Next week, “I think there will be a lot of interest.”