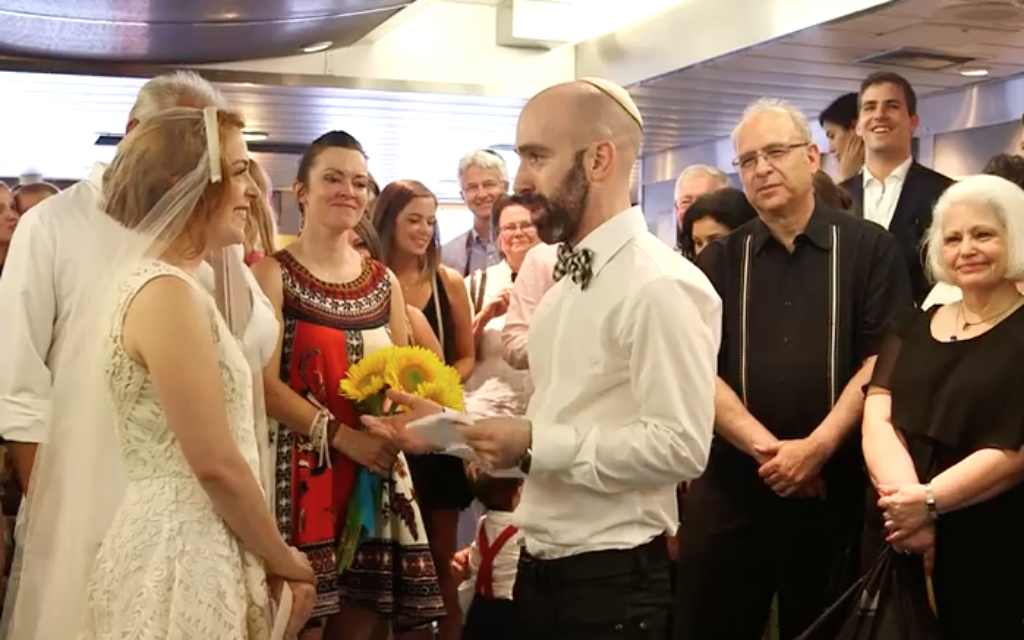 While some interfaith couples squabble over whether to have the wedding in a church or synagogue, Bethany Hall and Keith Haskel found an innovative solution: aboard the Staten Island ferry.

Accompanied by friends, family and a violinist, the Brooklyn couple wed late Friday afternoon on the 25-minute journey from Manhattan to Staten Island.

During the ceremony, a video of which was posted on YouTube Monday, the couple circled each other seven times and Haskel, who is Jewish, wore a yarmulke and stepped on a glass.

According to the New York Post, Haskel, 30, and Hall, 32, had originally planned a ceremony on the waterfront in the Williamsburg section of Brooklyn, but found the venue too pricey. The ferry, by contrast, is free, although everyone then had to pony up $2.75 for the subway ride to the reception.

Hall told the Post their different faith backgrounds also factored into the decision.

“He’s Jewish and I’m Presbyterian, so we felt like a temple or a church wasn’t appropriate and would just make one of us feel they weren’t being celebrated as much as the other,” she said. “We started looking for parks and different resources and a friend of ours was like, ‘Why don’t you get married on a ferry!’ And we thought, ‘That’s a great idea!’”

After returning to Manhattan on the next ferry back, the couple and approximately 80 guests commuted together via subway to a reception in Brooklyn.

“The whole way there we were dancing, playing ‘Empire State of Mind’ by Jay Z and other New York songs,” Haskel told the Post, describing the ride, which involved a transfer at the Union Square subway station. “It was awesome.”

The couple told the Forward they even danced the hora on the train.

“That was my favorite part,” Haskel said. “There was no chair involved, but they lifted me up and down.”

“It was just a really special day and I hope that we also brought a little bit of joy in commuters’ lives,” Hall told the Forward. “I think we managed to make everyone feel included and celebrated. I don’t think we could have asked for a better wedding.”

If the couple have children, will the naming ceremony take place aboard the Roosevelt Island tram?