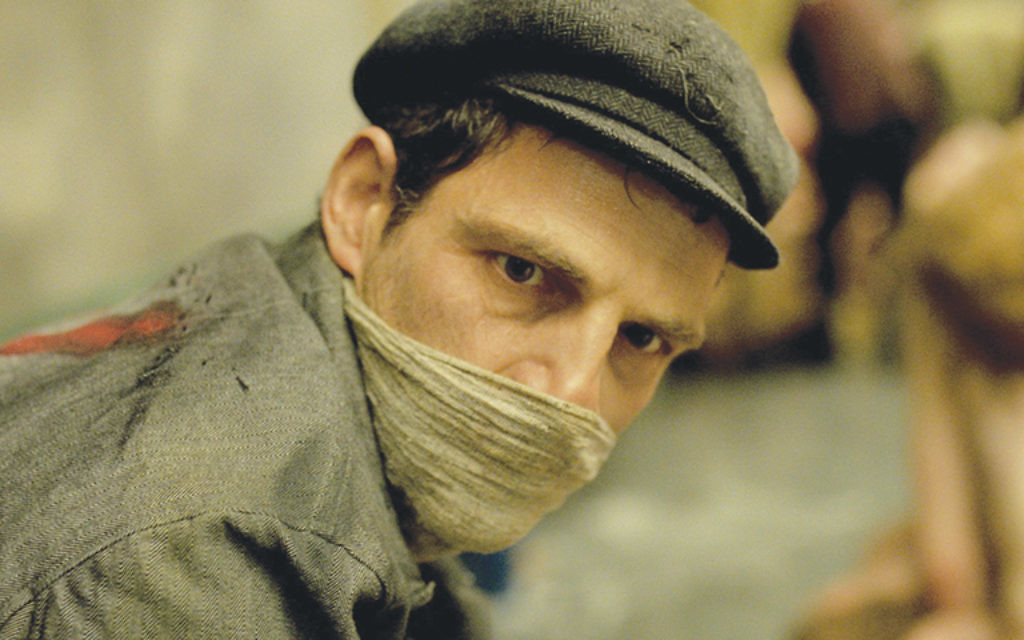 Death may not be, to borrow Paul Celan’s famous construction, “a master from Germany,” but for Jewish filmmakers of a certain age, the ashen shadow of the crematoria is never far away. More than other filmmakers, perhaps, they are acutely aware that close behind them are the beating wings of the angel of death.

Through an unfortunate chain of circumstances, this year’s New York Film Festival, which ends on Oct. 11, carries a more vivid reminder of the sound of those beating wings than usual. Yes, three of the Jewish-made and -themed films in the event are about the Shoah: “Son of Saul,” “The Memory of Justice” and “No Home Movie.” That’s not so unusual. But as this issue was going to press, it was announced that Chantal Akerman, director of “No Home Movie” and many other ground-breaking films, died in Paris at 65. (I will write about her enormous influence and the last film next week.)

“Son of Saul,” a first feature by László Nemes, was already famously controversial before it made the trans-Atlantic journey here. A fiction film based on the writings of members of the Auschwitz Sonderkommando, it is set in the very heart of the killing machinery. The Sonderkommando were predominantly Jewish prisoners selected by the camp personnel to do the actual dirty work of the death camps, helping herd the victims from the trains to the gas chambers, sorting through the belongings of the dead, cleaning the blood and excrement from the killing rooms, filling the crematoria with bodies and then disposing of the ashes. In exchange for this most awful labor, they were given better food and sleeping arrangements than the other prisoners. Every few months, the entire group would be killed and replaced. They were, after all, among the very few witnesses to the murders being methodically committed in the death camps.

In October 1944 the Sonderkommando in Auschwitz organized a short-lived, violent rebellion. They dynamited one of the crematoria, fought the SS with smuggled and improvised weapons. Around this time, they also managed to take a handful of photos of the gas chambers and the victims, the only visual documentation extant.

“Son of Saul” is set during the 48 hours surrounding these events. From its opening shot of Saul Ausländer (Geza Röhrig) working in the ordinary turmoil of a shift at the gas chambers, we are only occasionally aware of the larger picture. Rather, Nemes literally focuses our attention on Saul, almost always in close-up, his heavy brow often obscuring his penetrating, dark eyes, an impassive observer so inured to the nightmare around him that he seems utterly dehumanized. Nemes uses long takes and a perpetually moving camera combined with very shallow focus, with the result that we are only vaguely aware of the ghastly sights around Saul, as dimly aware as he seems to be. He is truly an ausländer, an outsider, a stranger, even to his own feelings. The constant motion serves to numb Saul (and the audience) to the (sur)reality around him.

All that changes when, in the process of emptying one of the gas chambers, the Sonderkommando find a boy who seems to have survived the gas. A Nazi doctor examines him, quietly chokes him to death and orders another doctor, one of the prisoners, to perform an autopsy. Saul sees all this, then believes that he recognizes the boy as his son. He becomes obsessed with the idea of providing a Jewish burial for the boy, and begins almost immediately to search for a rabbi in the camp with disastrous results for all.

In the Q&A that followed the press screening of the film, Nemes said that he didn’t want to make a film with a “distant point-of-view, but one that would place the audience in the shoes of one person in the middle of the killing machine.” The formal choices he has made succeed admirably in that goal. The long takes, the roaming camera, the unrelenting close-ups all combine to give a moviegoer the extraordinarily disturbing sensation of being trapped inside Saul’s head. Nemes’ refusal to show us the usual horror-porn images, obscuring them through shallow focus and the refusal to budge from the faces of the men, blunts the easy sensationalism that mars too many films about the Shoah.

He also eschews the primary visual trope of the genre, desaturated color. Inevitably the film has a muted palette that renders the visual field drab, but his choice of natural color pays powerful dividends towards the end of the film when events take us outside the camp into a birch-tree forest whose greenery seems almost liberatingly vivid.

It is much too soon to know how well “Son of Saul” will hold up on repeated viewings and over time. It is, I think, more fully realized than Tim Blake Nelson’s admirable “The Grey Zone,” and vastly preferable to all but a very few films set in the death camps. Of this I am certain: it is unlike any other fiction film about the Shoah, and it is a grueling experience.

One might say the same of Marcel Ophuls’ 1976 documentary “The Memory Justice.” Like his more famous “The Sorrow and the Pity,” Ophuls’ film is a four-hour-plus rumination on war guilt, built from interviews with participants and victims in the Nazis’ crimes. His focus in this film, which was screened in a newly restored version in one of the festival sidebars, is on the Nuremburg principles, the workings of the war-crimes trial and the applicability of these precepts to Algeria and Vietnam. At the heart of the film are two wildly different men, Albert Speer, Hitler’s architect and planning mastermind, perhaps the highest-ranking Nazi seemingly to accept and to acknowledge his own guilt, and Telford Taylor, former U.S. general, one of the prosecutors at Nuremburg and a staunch opponent of the Vietnam War.

They make a startling contrast, one that underlines the many complexities of the issues at stake here. Both men are handsome, articulate and urbane, possessed of both gravitas and a sense of humor. Yet one feels throughout that Speer is telling Ophuls what he thinks the filmmaker wants to hear, while Taylor is saying what he knows needs to be said. When the film premiered nearly 40 years ago, I cried at several key points; while he may not have his legendary father Max Ophuls’ sense of elegance, Marcel Ophuls has a similarly skillful sense of control and tone. In 2015, that skill still rules and I found myself yet again in tears. And in 2015, as well, the issues explored in “The Memory of Justice” are still on the front page every day.