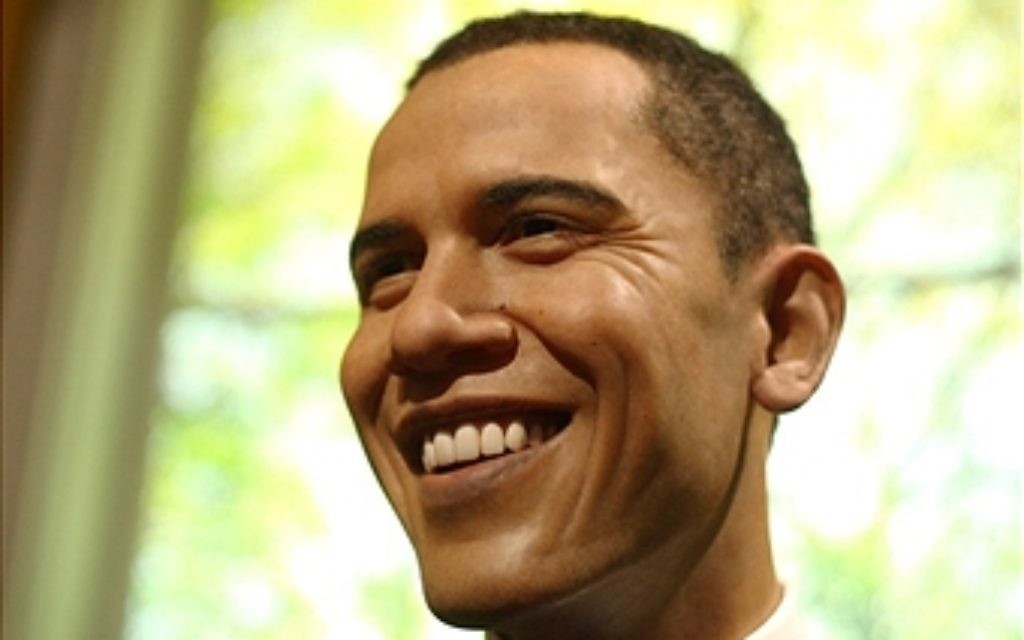 In winning re-election Tuesday, President Barack Obama beat back a strong challenge from former Massachusetts Gov. Mitt Romney, who tried to woo Jewish voters by painting Obama as an untrustworthy ally of Israel.

Despite his unpopularity among Orthodox Jews, Obama received 69 percent of the overall Jewish vote nationwide to 30 percent for Romney, according to early TV network exit polls. That was less than the 78 percent he received from those same pollsters four years ago, although Democrats noted that a more recent analysis put Obama’s 2008 win at 74 percent.

While Florida was too close to call at press time, other states with large Jewish populations — New York, New Jersey, Pennsylvania, California — all went to Obama.

In Florida, exit polls showed that Obama won 69 percent of the Jewish vote compared with 31 percent for Romney. Romney thus picked up more support in the last two months after the Republican Jewish Coalition launched an “Obama, Oy Vey” advertising blitz. A poll by the American Jewish Committee at the beginning of September had found Jewish support for Romney was at 25 percent and for Obama 69 percent.

The Romney campaign had believed Obama was vulnerable on Israel because of tensions created shortly after Obama took office. At the outset, Obama tried to be more evenhanded in dealing with Israel and the Palestinian Authority than his predecessor, George W. Bush, who was perceived as very pro-Israel.

Despite a smaller margin of victory among Jewish voters, some said they resented Romney’s attack on Obama’s Israel record.

“It disturbs me greatly that the Republicans chose to make Israel a wedge issue among American Jews,” said Marlene Ostrow, 53, a political consultant in Cincinnati. “It was an act of fear-mongering and a distraction.”

Aaron David Miller, an adviser to the Israel Policy Forum and a public policy scholar at the Woodrow Wilson Center, said Obama’s Jewish support was “within a respectable margin” of where it had been four years ago.

The slippage, he said, could be attributed to concern about “his relationship with Netanyahu and Israel in general. … I don’t think it was terribly consequential. Jewish Democrats are concerned but are not abandoning him in droves.”

Miller said that in addition to social issues — the two Republican senatorial candidates who spoke of the legitimacy of rape were defeated — Jews were also concerned about the economy.

“They ask themselves whether the guy in power is responsible for my misery,” he said. “If the answer is absolutely, they ask whether the other guy has a compelling plan that makes me confident my vote for him will make things better. I suspect a lot said yes to the first question but not enough came to the same answer on the second.”

He added that a big question now will be how during his second term Obama and his advisers will deal with the Israeli-Palestinian issue and Iran’s quest for a nuclear bomb.

Gerald Steinberg, a political science professor at Bar-Ilan University, said that for Romney playing the Israel card “was always a long shot.”

He said he believed the personality conflicts between Israeli Prime Minister Benjamin Netanyahu and Obama “were way overplayed in the media.” Besides, he said, “in general, personalities do not play a substantive role — it’s interests and policy options” that are the determining factors in decision making.

Steinberg said that in the end, the Republican-controlled House would still act as a “check and balance” on Obama regarding his Middle East positions.

Jonathan Sarna, a professor of American Jewish history at Brandeis University, said the drop in support for Obama could have been for several reasons — concern about his Israel policies, the economy and the general state of the country.

Because Obama won not only the Electoral College votes but also the popular vote, Sarna said, “it may turn out that the importance of the Jewish vote was greatly exaggerated.”

The eight-point drop in Jewish support for Obama appears to “strengthen the hand of those who believe the Jewish community is edging away from the Democratic Party towards a more balanced stance between the two parties,” Sarna observed. “Looking ahead 50 years, we may look back amazed that Jews were seen as so reflexively Democratic.”

Jim Gerstein, an independent pollster who polled Jewish voters nationally and in Florida for J Street, said his findings were consistent with those of the TV networks. He polled also 600 Jews in Ohio and found they voted 69-30 for Obama.

Gerstein said these numbers, combined with a 54 percent favorable rating by Jews of the Democratic Party and a 64 percent unfavorable rating of the Republican Party — suggest that Jews are still committed Democrats. The slightly lower number of Jews voting for Obama Tuesday is relatively inconsequential, he maintained.

“I strongly disagree with the notion that something unique is happening in the Jewish population that reflects a gradual erosion of the Jewish vote for Democrats,” he said.

The top issues for Jews by far were the economy and healthcare, Gerstein said of his exit poll results. Israel and Iran were far down on the list of important issues.

Sarna noted that the “message for Jews is that this election was a lot about Hispanic voters, who turned out in enormous numbers for Obama. The good news is that a principal concern of Hispanics is immigration, which was the signature issue for Jews for decades. This opens the possibility of Jews forging bridges to Hispanics in support of a new immigration policy.”

One of Obama’s first actions was to call for Israel to halt all settlement building in the West Bank as a prelude to renewed peace talks with the Palestinians. The move seemed to set in play a narrative that came ultimately to define the campaign between the president and Romney. It was a demand rejected by Netanyahu, who pointed out that Israel had just completed a 10-month self-imposed building freeze that the Palestinians ignored for the first nine months.

And Netanyahu received a cool reception at the White House when he went to discuss Israeli plans to build 1,600 new apartments for Jews in east Jerusalem that had been announced during Vice President Joe Biden’s earlier trip to Israel.

The Obama administration strongly condemned the construction plans and Netanyahu turned down its call for their cancellation.

The frosty U.S.-Israel relations caused former New York City Mayor Ed Koch to declare that the Obama administration had wanted to make Israel into a “pariah.”

“It’s outrageous, in my judgment,” Koch said in April 2010. “I believe that the Obama administration is willing to throw Israel under the bus in order to please Muslim nations.”

Koch then helped Republican Bob Turner win a special congressional election in a Democratic district in Queens and Brooklyn to send a message to the White House about Israel. But he later ironed out his differences with Obama and supported his re-election.

The campaign also proved that you can’t buy an election, Sarna said. He pointed out that Sheldon Adelson, the 79-year-old billionaire chairman of Las Vegas Sands Corp., and his wife, Miriam, spent millions in support of Romney — reportedly at least $47 million. They also backed Rabbi Shmuley Boteach, who lost his congressional bid in New Jersey. And Sarna said the campaign of Josh Mandel in Ohio also outspent incumbent Sen. Sherrod Brown but failed to unseat him.

Romney also appears to have been hurt by his embrace of the right wing of his party during the Republican primaries and by his selection of Tea Party favorite Rep. Paul Ryan of Wisconsin as his running mate.

The AJC found two months ago that 49 percent of Florida Jews strongly disapproved of Ryan and that 72 percent said the selection was important or very important in deciding their vote. Only 5 percent of Jews listed Israel-U.S. relations as the most important issue. Most Florida voters, as well as the nation as a whole, listed the economy Tuesday as their No. 1 issue.

Although Romney sought to moderate his social views during the general election, many Jewish women said they could not forget his embrace of such conservative social issues as restrictions on abortion rights and opposition to same-sex marriage. Thus, even though the Republican Party platform called for an end to all abortion, Romney said he would favor it in the event of rape, incest or to save the health or life of the mother.

Because of Ryan’s social views, he was deliberately kept away from Jewish venues, according to Jacques Berlinerblau, an associate professor and director of the Program for Jewish Civilization at Georgetown University.

David Makovsky, a senior fellow and director of the Project on the Middle East Peace Process at the Washington Institute, said it would be interesting if Obama’s victory “incentivizes” Netanyahu into believing he would be better off with a unity government rather than replicating his current coalition and perhaps avoiding further confrontation. Such a move, he said, “would be viewed in Washington as a positive signal.”

He said also that he believes Washington will be able to deal more quickly with the Iranian issue than had Romney won and been required first to assemble a team.

Regarding the Palestinians, Makovsky said that unless Palestinian President Mahmoud Abbas comes to Obama with concessions — he spoke of some in a recent interview — one could expect little movement on the Israeli-Palestinian conflict.

That could change, however, should Obama’s new secretary of state wish to tackle the issue but avoid committing presidential capital, or should Israel unilaterally attack Iran’s nuclear weapons facilities, thereby creating pressure to convene an international conference to deal with the Palestinian issue.