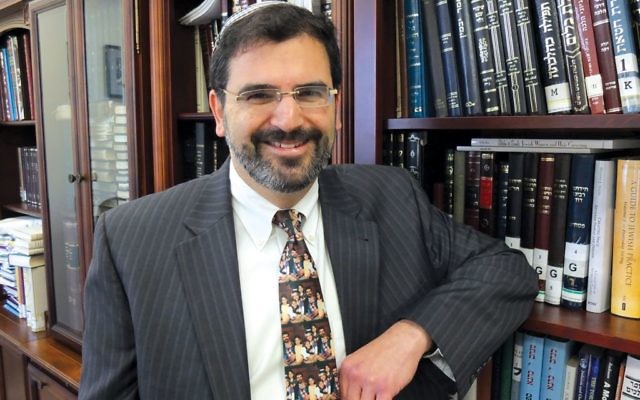 Rabbi Asher Lopatin tells The Jewish Week that is was simply “time” to move on after five years, and that Yeshivat Chovevei Torah is on sound footing. JW

In a surprise email to “friends and supporters,” Rabbi Asher Lopatin, president of Yeshivat Chovevei Torah Rabbinical School in Riverdale, the Modern Orthodox yeshiva founded in 1999 by maverick Rabbi Avi Weiss, has announced that he will be leaving his post at the end of this academic year.

“We have successfully transitioned the yeshiva from its founder stage … to a more established, mature stage institution,” he wrote, choosing not to offer an explanation for his departure.

Rabbi Lopatin, who turns 53 this week, said it was not a sudden decision but rather one that he wanted to announce after first telling students, who returned this week.

“I think the time was right,” he told The Jewish Week. “I love this institution and am proud what we have done.”

Asked his future plans, Rabbi Lopatin said he has “lots of different opportunities” but that nothing has been finalized.

He said there would be an “international search” for a successor.

The yeshiva’s board chair, Daniel Perla, told The Jewish Week that Rabbi Lopatin did “an extraordinary job on the transition” from Rabbi Weiss, and that the YCT community felt Rabbi Lopatin has been “very successful” and it was “time for a change.”

In his email announcement, Rabbi Lopatin noted that since his arrival four years ago the yeshiva has graduated “two of the largest classes ever at YCT, placing them in outstanding jobs in both the Orthodox and broader Jewish community, in pulpits, schools, college campuses, and hospitals ….”

In recent years, Rabbi Lopatin has begun referring to the yeshiva as a “Modern Orthodox” institution rather than the “Open Orthodox” nomenclature that had been used by Rabbi Weiss. The change was more than one of semantics; it is seen as an attempt to bring the yeshiva into the Orthodox fold, albeit on the liberal edge, after years of stressing the kind of inclusivity that did not sit well with mainstream Orthodox Judaism.

In an Aug. 18 Jewish Week article, Rabbi Lopatin said “We are doubling down on the idea of openness but also emphasizing the reality that we are part of the Orthodox world.” He subsequently pointed out that YCT has been successful in placing students and graduates in pulpits as well as in educational or chaplaincy posts. Last year, he noted, five of its 12 graduates took pulpit positions.

“The job is 25 hours a day, eight days a week and people do not want to stay there a long period of time.”

The announcement by Rabbi Lopatin, who prior to coming to New York led a major Modern Orthodox synagogue in Chicago, came as a surprise to Steven Bayme, director of the Contemporary Jewish Life Department at the American Jewish Committee and a close watcher of Modern Orthodoxy. He said that, given the demands of the position, it was not entirely unexpected.

“The job is 25 hours a day, eight days a week and people do not want to stay there a long period of time,” he explained. “Turnovers in presidencies are pretty common. I think seven years might be the average. … Given the pressures of fundraising and institutional stability, five years is a little short, but not that much.”

Rabbi Lopatin’s decision to leave at the end of the school year, Bayme observed, comes at a time when the “challenge is enormous in terms of the growth and development of Orthodoxy, especially at a time when it has been moving for decades to the right.”

Bayme said he is not aware of anyone who has been groomed to succeed Rabbi Lopatin, and that the choice of his replacement would be a critical one.

The yeshiva, Bayme said, “is a major counter-voice,” and its leadership is “one of the most challenging and important in the Orthodox world. It’s important to find the right person. I don’t know of any national figure who is ready for it. … Given that they have so many graduates [120], perhaps the time is right [to select one of them].”