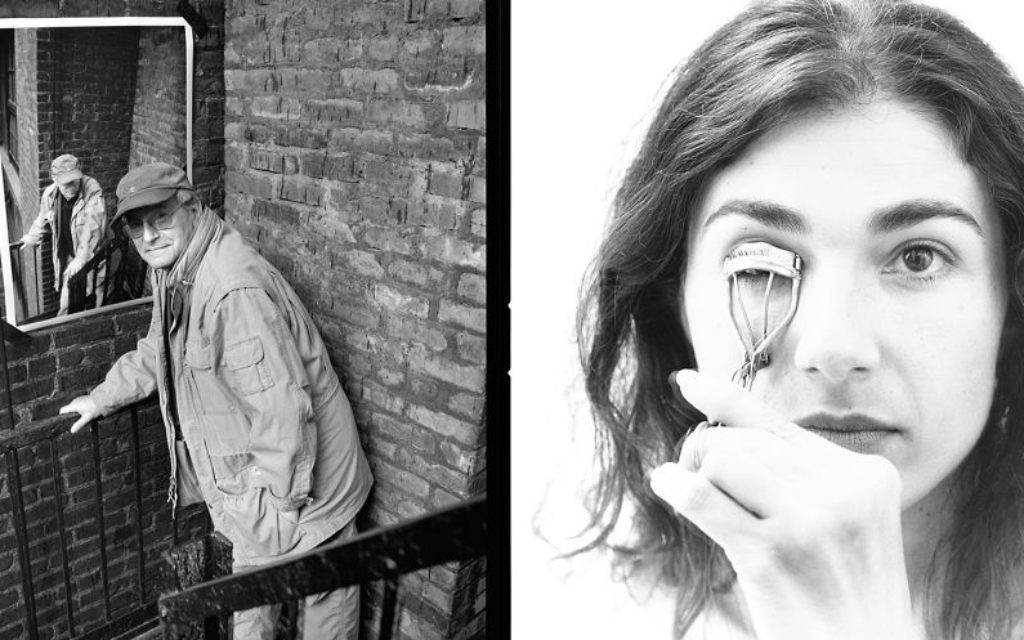 Penny Wolin has been described as “a street photographer who knocks on the door.” She has the openness, spontaneity and spirit of the street, along with the gift of conversation. Working on her new book, “Descendants of Light: American Photographers of Jewish Ancestry” (Crazy Woman Creek), she traversed the country to meet photographers in their homes and studios.

Wolin describes her practice as both a portrait photographer and a visual anthropologist, and feels strongly about combining words and images.

“It’s an interesting thing about photography: a photograph can definitely be worth a thousand words, but match a few words with a good photograph and you have told the whole story,” she says.

She spent more eight years on this project, and met with more than 65 photographers including Jay Maisel, Joel Meyerowitz, Bruce Davidson, Annie Leibovitz and Rosalind Solomon. For each, she features a two-page spread including excerpts from their conversations, and she has a good ear for a telling quote. In her interviews, she pushed these artists to articulate something about their photographic vision, their approach to Judaism, and whether they see their work as photographers as somehow connected to their Jewish background.

Wolin also includes a photo each subject shared from a family album, and then her own full-page portrait of the person. At the back of the book, she includes an iconic photograph by each, like Arnold Newman’s 1968 portrait of Leonard Bernstein at the New York Philharmonic and Ira Nowinski’s photograph of piles of prisoner cutlery in Birkenau, shot in 1988.

Elinor Carucci, who is photographed by Wolin curling her eyelashes, tells her, “We make photographs to remember how we are and what our lives were. … I don’t want to define it [the essence of photography] as Jewish, but rather to perhaps define the sensitivity to see it as something Jewish.”

Wolin’s black-and-white photographs are stunning — they are strong in composition and detail, and reflect the intimacy she achieves with her subjects. She traveled in a converted Sprinter van, retooled with cabinets, heat and room for her and her dogs to sleep.

She captures Annie Leibovitz with her hair down, and 93-year-old Helen Levitt tells her, “Honey, you’re not getting next to me with a camera.” So, she shoots a younger photograph of Levitt, in her 93-year-old hands, against a black background for striking effect. Robert Frank also did not want to be photographed but, after they found rapport in conversation, he agreed to have Wolin photograph his desk. As she was working, he walked right into the frame and she captured the moment. He was surprised, but agreed to let her use it. Her photo includes his desk, with relics of his travels, framed photos, a magnifying glass, an unopened bottle of wine, and half of him — his face in profile — at the edge.

Several of the photographers have been shooting since they were very young. Peter Aaron, who got a Nikon F for his bar mitzvah, tells her, “Even though I don’t associate with the religion, when I am in the company of Jews I feel like I am closer to home.”

Jason Eskenazi believes “there’s something about Jews picking up cameras. Though I take pictures in the physical world, it’s really about self-reflection; the inquiry of knowing oneself that Jews have made for so many millennia.”

Abe Frajndlich, who was born in a DP camp, credits all the years he spent moving from country to country, adapting to different languages and cultures, to enabling him now, as a photographer, to walk into any situation, encounter people “and immediately get into their frequency to win their trust.”

In some cases, the photographers Wolin was interested in were deceased, and she met with family members of Walter Rosenblum, Nickolas Murray, Garry Winogrand and others. She also names other photographers who, despite her persistence, chose not to participate, like Lee Friedlander, Sylvia Plachy and the families of Richard Avedon and Carl Mydans. And, understanding that there are so many leading “photographers of Jewish ancestry,” whether photojournalists, fine artists, portraitists, fashion photographers or street photographers, she includes a further list of names.

In an interview in New York City, Wolin is careful about her terminology, speaking not of Jewish photographers, but photographers with Jewish backgrounds or ancestry. Many of her subjects were ambivalent about being identified as Jewish photographers as they weren’t practicing Jews, didn’t focus on Jewish subjects and weren’t comfortable with any label. But as long as she steered clear of religion and the notion of “a Jewish eye,” they were intrigued to participate.

“For me the work is semi-autobiographical,” she writes. “I am a Jewish photographer photographing other photographers of Jewish ancestry. We all intently question and answer what we see before us. And one way or another, we continue to master our Jewish American identities as well as the continuing cultural and technological revolution of photography.”

Wolin doesn’t think there’s a particular Jewish vision in the work of these photographers, but she does believe that there’s something in their collective history of exile that motivates them and enables them to observe their surroundings deeply. “If we look like our ancestors,” she asks, “might we act like them too, with a certain muscle memory? How does that experience affect our abilities to be photographers, to live on the edge of a host culture?”

“It is not a coincidence,” she writes, “that Jews are attracted to the alchemy of photography, and that photography has found its storytellers in Jews.”

She quotes the gallerist Howard Greenberg, whose eponymous New York gallery specializes in photography: “Photography has almost a genetic appeal to the Jewish mind, the universal Jewish culture.”

Wolin became interested in photography while growing up in Cheyenne, Wyo. She studied her family’s subscription to Life magazine, and with the heightened sense of Jewish identity that often accompanies small-town Jewish life, she realized that many of the photographers she admired were Jewish. She went on to study photography in California and continued to notice how many people whose work she was following were Jewish – and began thinking about the connections between Jewish roots and the skills involved in photography.

In 1984, she began a project documenting 150 years of Jewish history in Wyoming, the “Cowboy State.” She put together a photographic book and exhibition “The Jews of Wyoming: Fringe of the Diaspora.”

Wolin, the recipient of grants from the National Endowment for the Arts and the National Endowment for the Humanities, has worked in commercial, editorial and documentary photography. Her work is held in the Smithsonian Institution and museums around the country. She divides her time between the north and south of California, Wyoming and New York. Her self-portrait included here, shot at the Dead Sea, captures her vibrance.

“Descendants of Light: American Photographers of Jewish Ancestry” is a large-format, handsomely designed book with photography that’s beautiful and captivating; readers will enjoy lingering in these pages and in their ensuing questions.