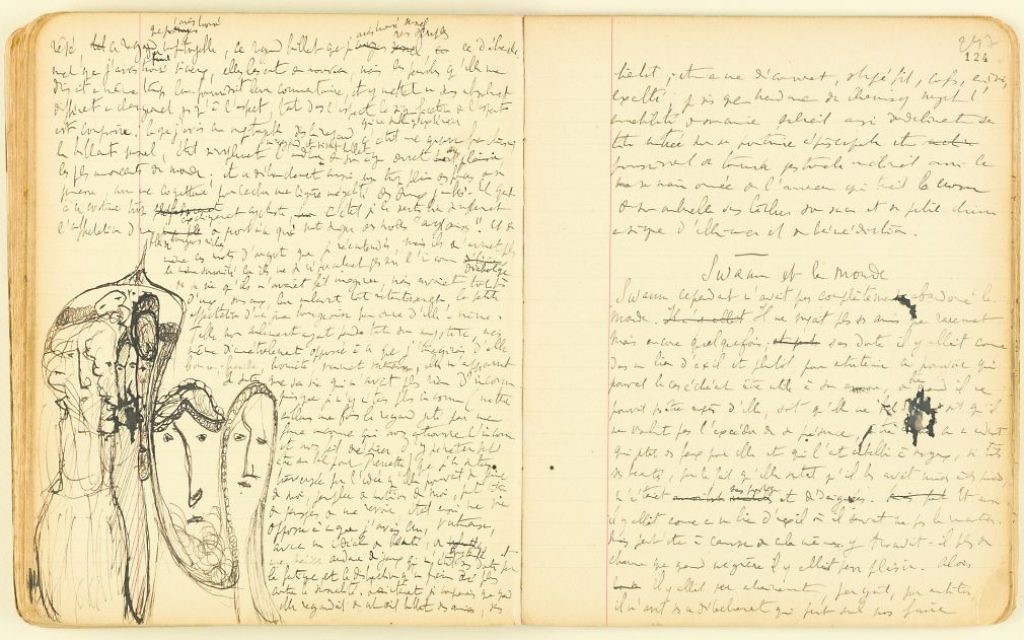 In his writing, he exposed the rampant anti-Jewish currents in the Parisian society of his era.

He referred to himself as “the first Dreyfusard,” because he was one of the earliest and most prominent defenders of Alfred Dreyfus, the Jewish army officer falsely denounced for treason. And even though he was baptized and raised as a Catholic, the same faith as his father, when a newspaper columnist sought to insult him by labeling him a Jewish writer, he refused to correct or respond because he felt it would have meant denying his mother’s Jewish heritage.

He was Marcel Proust, author of what many critics and readers regard as one of the greatest novels ever written, “In Search of Lost Time.” This year is the 100th anniversary of the publication of the first of its seven volumes, “Swann’s Way.” And to commemorate that landmark, the Morgan Library and Museum here is presenting a small but potent exhibition that provides rare insight into both the world and the working process of the great French author. The show, “Marcel Proust and Swann’s Way: 100th Anniversary,” was organized by the Bibliothèque nationale de France and the Cultural Services of the French Embassy. It is on view through April 28.

After “Swann’s Way” appeared in print in 1913, Proust devoted the rest of his life (he died in 1922 at the age of 51) to the writing of the remaining volumes, three of which were published posthumously. The sheer length of the entire novel — 3,000 pages — can be intimidating, but the scrawl-filled notebooks, manuscripts, and galley proofs on display make it clear that this monumental undertaking was written one word, phrase and page at a time. And also re-written, again and again. Numerous passages have been crossed-out, replacements and additions fill the margins and those additions are themselves subject to more cross-outs and additions.

In these documents, Proust refined his ideas — about time and memory, social ambition and artistic achievement, love and jealousy, and so much else — and sketched out scenes that would dramatize those themes through the intertwined lives of an assortment of characters from different social classes. We view the often surprising transformations of those characters over the course of decades. And even though none of the pages that are open for perusal in the exhibition refer directly to anything Jewish, the novel itself has much to do with themes of assimilation and anti-Semitism, starting with the title character, Charles Swann.

We learn early in the novel that Swann is “of Jewish extraction.” But he is also so thoroughly assimilated that he has been elected a member of the aristocratic Jockey Club (which generally excluded Jews) and socializes with the most refined and stylish members of French high society. One of Proust’s models for Swann will be no stranger to readers of the best-selling Jewish roots-tracing memoir “The Hare with Amber Eyes: A Hidden Inheritance,” by Edward de Waal. That would be de Waal’s great-grandfather’s cousin, Charles Ephrussi, a wealthy art collector from a prominent Jewish banking family who, like Swann, was an amateur art historian who frequented fashionable salons. De Waal wrote, “They were both Jewish. They were both men of the world. They had a social reach from royalty (Charles conducted Queen Victoria around Paris, Swann was a friend of the Prince of Wales) via the salons to the studios of artists.” And ultimately, de Waal wrote, “They are both Dreyfusards who find that their carefully constructed lives are deeply riven by their Jewishness.”

Ephrussi did indeed share these characteristics with Swann, but according to most literary experts it was another assimilated French Jew who was the primary model for Swann. That would be Charles Haas, says Antoine Compagnon, guest curator for the Proust exhibition and professor of French and comparative literature at Columbia University, as well as at the Collège de France, Paris. Like the fictional Swann, the real-life Haas was the only Jew to become a member of the Jockey Club, and he hobnobbed regularly with the titled aristocracy. “Haas is the main model in terms of Swann’s situation in the highlife of Paris,” Compagnon says.

Starting in “Swann’s Way” and throughout the subsequent volumes, Proust contrasts Swann and his seemingly seamless absorption into French society with another Jewish character, Albert Bloch, an ambitious would-be writer whose tone-deaf efforts to insinuate himself into lofty social circles is a frequent source of comedy. But as the Dreyfus Affair unfolds — as the novel proceeds, its timeline coincides with the scandal, which played out from 1894 until 1906 — the aristocrats who had once befriended Swann, and even begun to tolerate Bloch, turn on both of them with hateful displays of anti-Semitism.

For Proust himself, the fact that his mother was Jewish never seemed to be an issue, says Compagnon. Jeanne Weil Proust (1849-1905) was born into an assimilated Jewish family from Alsace, and its observance of Jewish ritual was probably limited to the High Holy Days as well as Jewish burial and mourning customs. And though she intermarried, she never converted, and always remained close to her Jewish family. Proust’s own relationship with his mother was the closest and most important in his life. A photo on display at the Morgan exhibition shows a simply yet elegantly dressed Mme. Proust seated with her two sons, Marcel and Robert, flanking her on either side. Two letters in Proust’s looping handwriting addressed to her begin, “Ma chère petite Maman.”

Other exhibition photos from the late-19th and early-20th centuries show scenes of the then-newly built district that included the Boulevard Haussmann, where Proust and his family lived — as did many members of the newly assimilating Jewish bourgeoisie. By contrast, the titled aristocracy of that era (in Proust’s fiction and in real life) resided in the older, historic area of the Faubourg Saint-Germain.

It is in the drawing rooms of the Faubourg Saint-Germain that we see Swann, the secularized Jew, become an outspoken Dreyfusard. The more fervent a supporter Swann becomes of the Jewish officer, the more identified he also becomes — in his own eyes, as well as in those of his predominantly anti-Dreyfusard aristocratic friends — as a Jew. And it is because he will not disavow Dreyfus or his Jewishness that these so-called friends turn on Swann. The Duc de Guermantes, the one-time friend who had brought Swann into the Jockey Club, declares him a “foreigner,” ranting: “Until today … I have always been foolish enough to believe that a Jew can be a Frenchman, I mean an honorable Jew, a man of the world. Now … he forces me to admit I was mistaken, since he has taken the side of this Dreyfus.”

That scene does not occur until a later volume of “In Search of Lost Time” (the fourth, “Cities of the Plain”), but the stage for it is set starting in “Swann’s Way.” It is this plot trajectory that helps leads Compagnon to comment, “One can say it’s a novel on the success and failures of assimilation.”

The Jewish theme is certainly not the only theme in Proust, to be sure. But it bears looking into — my synagogue book group, for instance, is midway through an ongoing project to read all of “In Search of Lost Time.” As Compagnon says, “It’s a novel where you can find everything, including the Jewish issues, which few writers have dealt with as thoroughly as Proust.”

Diane Cole, author of the memoir “After Great Pain: A New Life Emerges,” writes for The Wall Street Journal and other publications, and is a faculty member of the Skirball Center for Adult Jewish Learning in New York.