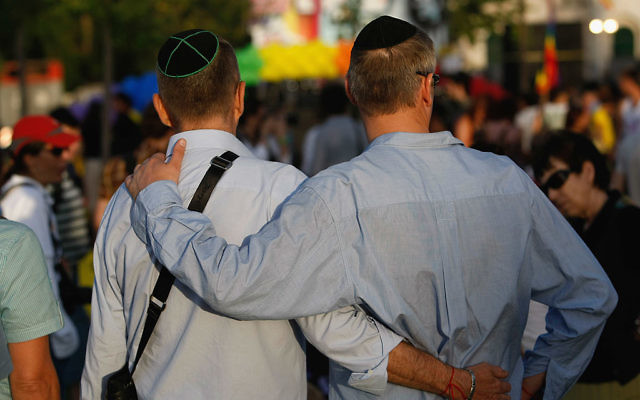 Throughout their vibrant history, Sephardic Jews have had the strength and fortitude to hold the community’s diverse perspectives together. That is, until May 8. On that day, speaking to a packed London Orthodox audience, Rabbi Joseph Dweck, a respected rabbinical authority, took an inclusive stand on the subject of male homosexuality.

Rabbi Dweck, a Brooklyn-born Syrian Jew now serving as a rabbi and educator in London, presented an historically informed, transparent and detailed examination of the traditionally taboo topic. Rabbi Dweck’s 90-minute presentation displayed intellectual rigor and sound persuasive reasoning, offering a Torah perspective on homosexuality. He said the approach “helped society be more open to the expression of love between men.”

The rabbi understood that giving such a lecture — and having it recorded — left him vulnerable to criticism, or even worse, anger, from anyone with differing views on the topic. Knowing this, and speaking to a large Jewish audience in the London suburb of Hendon, Rabbi Dweck stated, “There is love in the room. I am banking on the fact that there is love in the room.”

Perhaps his expectations were too high.

Some Orthodox critics consider Rabbi Dweck’s lecture heresy, while others called him dangerous, poisonous, and even corrupt. Some reactions from the right of Orthodoxy even suggested that his metaphoric black hat be removed. In response to the outcry he has taken a leave from his position on a rabbinic court in London.

Sephardic Jewish life, since the Golden Age of Spain, has been soaked in compassion, empathy and warmth. The Sephardic Jewish community, defined in the broadest sense, includes almost anyone Jewish who isn’t Eastern European. Many argue that Sephardic Jewish life offers a more diverse perspective because much of daily living, dating back to the 1400s, was alongside the many diverse perspectives in the Iberian Peninsula, including Muslims and Christians. Sephardic Judaism has been mostly homogenous, distinct from counterparts from Eastern Europe, who broke into the factions known today as Reform, Conservative, Reconstructionist and Orthodox. The Sephardic Jews, with vastly diverse traditions and culture, remained inclusive and respectful of individual customs. For the majority of their history, and outside of a fashion trend, Sephardic Jews did not wear the black hats of their Ashkenazic brethren.

‘His was a renaissance approach, putting love, rather than strict obedience, at the center of Jewish observance.’

Rabbi Dweck’s lecture was a proud return to the warm, loving and highly intelligent approach to Jewish practice reminiscent of the Golden Age of Spain. His was a renaissance approach, putting love, rather than strict obedience, at the center of Jewish observance. (The latter has often caused the inimical hatred and even name-calling shown to Rabbi Dweck.) This positive, loving approach was the hallmark of my 1997 vision when I founded what was then a new progressive Jewish day school. Both visions follow an inclusive Sephardic model of Jewish thought: warm, loving and empathetically oriented. This is not to suggest that other opinions cannot be held, but those positions, however diverse, should be equally debated through respectful dialogue.

Rabbi Dweck, for the first time in recent memory, proudly and courageously returned Sephardic Judaism back to this positive, compassionate approach to Jewish scholarship. The response to Rabbi Dweck’s actions has been shameful, particularly for true Jewish thinkers, practitioners or anyone who claims to have deep, considerate views towards any individual who experiences the world differently than the majority.

Rabbi Dweck’s scholarship is an example of what Rabbi Marc Angel, rabbi emeritus of New York’s Congregation Shearith Israel, says serves, “to bring Jews into a sensitive relationship with the natural world.” Rabbi Dweck’s lecture should be applauded for its academic bravery, as well as the courage and prowess required, tackling a subject most Orthodox rabbinical authorities would fear. He proved there are Jewish scholars that have the capacity to align heart and mind, a long-held tradition of the Sephardic Jewish people.

As a devoted father of three, advocate and leader in the Jewish community, and proud Sephardic Jew, I affirm my commitment to this traditional, intelligent and compassionate approach to Jewish life. We can’t understand walls and boundaries unless we have the courage to deconstruct them. Scholarship requires the ability to be bold, steadfast, and committed to intellectual rigor, particularly in the midst of unpopular notions. Disruptive discourse must be encouraged. We must demand it of our leaders, particularly Jewish educators.

Jewish tradition often describes the task of the Jewish people as being a light unto the world. How can we be a bright beacon without possessing the spiritual instinct and intellectual skill to thoughtfully forge ahead in complex dialogue, even during controversy?

Jewish educators must be fully prepared to mentor the next generation of Jewish thinkers. We need robust scholars such as Rabbi Dweck, who can stand on the steep edge of the highest intellectual cliffs, prepared to jump, but who are able to hold on for the world’s safety and humanity.