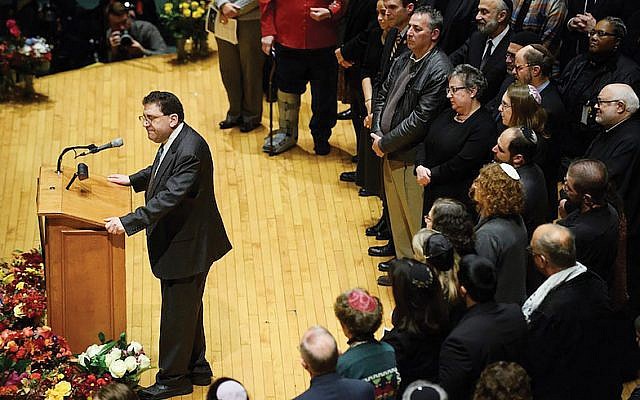 New Light Rabbi Jonathan Perlman at a vigil after the Tree of Life attack. Getty Images

It took the holiday of Purim, with its “light and gladness and joy,” as the Book of Esther puts it, and the powerful story it tells of goodness and bravery beating back evil. And it took Jews, Muslims, Catholics, Protestants, Hindus and Pittsburgh police officers — of all colors and races — lifting their voices, and groggers, collectively to drown out the name of the evil Haman each of the 54 times we heard it intoned at a community Megillah reading.

A member of Haman’s tribe of Amalek walked through the doors of the Tree of Life Synagogue in this city’s Squirrel Hill neighborhood five months ago. My husband, Rabbi Jonathan Perlman, narrowly escaped being shot that Oct. 27 day, a Shabbat morning; three of our congregants from New Light Congregation and eight from Dor Chadash and Tree of Life, the other two congregations that shared space in the Tree of Life building, were killed. (Just days before the Purim event, another member of that awful tribe walked through the doors of the Al Noor mosque in Christchurch, New Zealand, and gunned down 50 worshippers.)

New Light sponsored the Purim spiel and meal last Thursday night, but it was inspired by Fred Rogers, the creator of “Mr. Rogers’ Neighborhood,” who lived in Squirrel Hill and in whose hands neighborliness and compassion became high arts. I live in Mr. Rogers’ neighborhood. I’ve been driving past the home where he lived for many years when I take my daughter to school every day, past the Pittsburgh Theological Seminary, where he got his ordination as a Protestant minister, and I do my laps in the Jewish Community Center pool that he used when the Pittsburgh Athletic Club was closed. 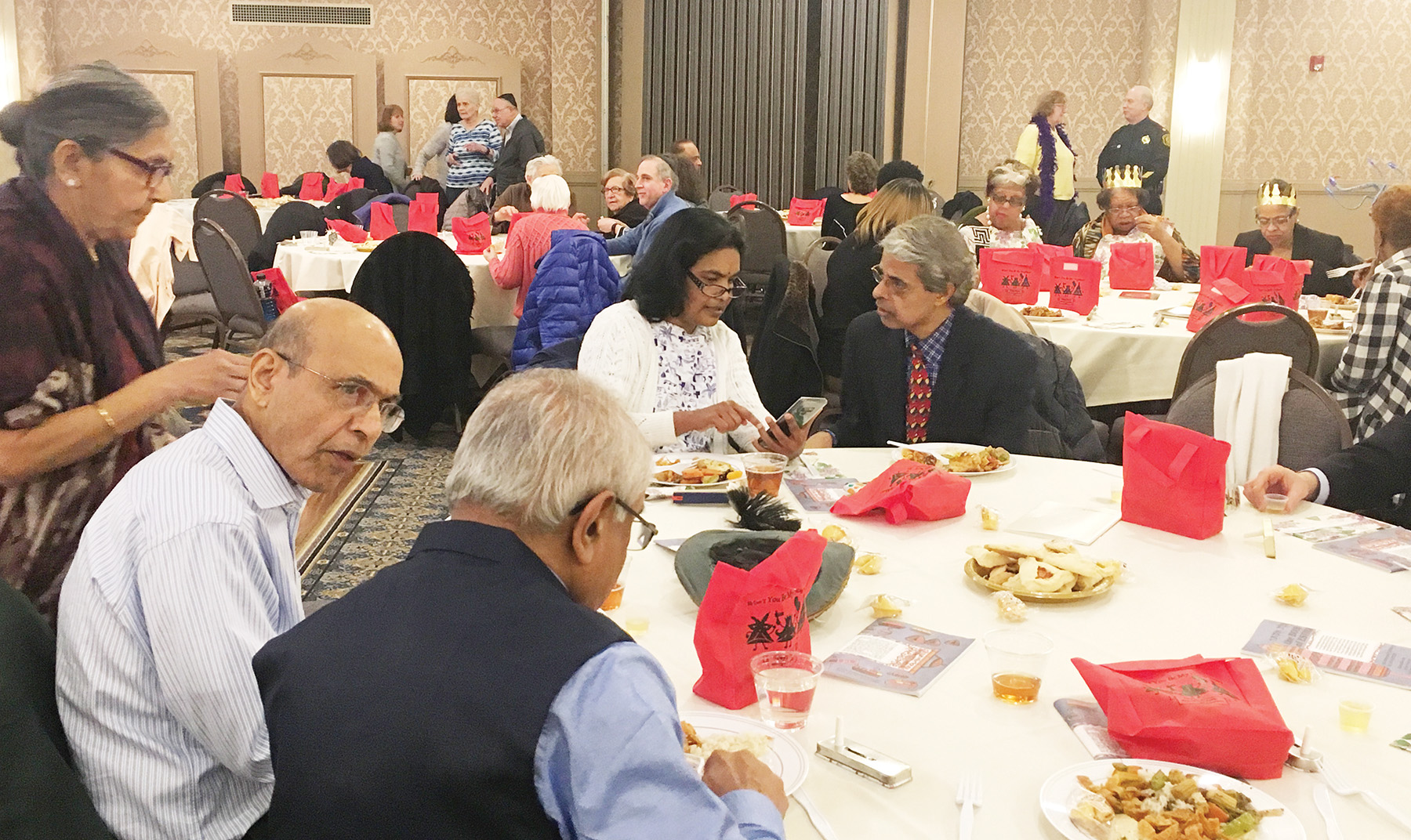 Neighbors helped get us through that terrible October day, and its aftermath. So to mark Purim, we invited some of them — “the helpers,” in Mr. Rogers’ words, who ensure hope — to join us at Beth Shalom congregation as we pierced our collective grief with a few rays of light. There were members of Rodman Street Baptist Church, who held a service for us on Oct. 31 at the midpoint in our three days of funerals. We invited members of the Islamic Center of Pittsburgh and members of Shadyside Presbyterian Church, who had donated money to assist us. There were members of the Hindu Jain Temple, who held a service for us on the final night of Chanukah, the one that brings the most light into the world. They fed us wonderful vegetarian food and soothed us with rice pudding and prayers. And there were first responders from the Pittsburgh police department, some of whom were injured in the Tree of Life attack. In a moment of great poignancy, three survivors from our congregation were able to personally thank them.

For the spiel, we actually set the Purim story in a recreated Mr. Rogers’ neighborhood, complete with the trolley to the Land of Make Believe, the puppets and Rabbi Perlman as Mr. Rogers himself, with the trademark canvas sneakers and cardigan sweater. There were jokes about Mr. Rogers going to the local bar and teaching its patrons how to say “chaver,” Hebrew for friend, and gags about the zipper on the cardigan getting snagged. The production got laughs in most of the right places, as well as a few inadvertent ones, and then it was time for kosher Chinese and a little vodka (the Muslims and the cops abstained).

But, of course, Purim isn’t all laughs. It’s tempered with tragedy, the story moving from impending doom to celebration. A shared sense of tragedy is what led members of Rodman Street’s choir to accompany members of New Light on a trip to Charleston, S.C., during Martin Luther King weekend, to take guidance and comfort from members of Emanuel African Methodist Episcopal Church (known as Mother Emanuel) and its pastor, who had their own visit from Amalek in 2015; nine worshippers in a Bible study session there were killed by an avowed white supremacist. 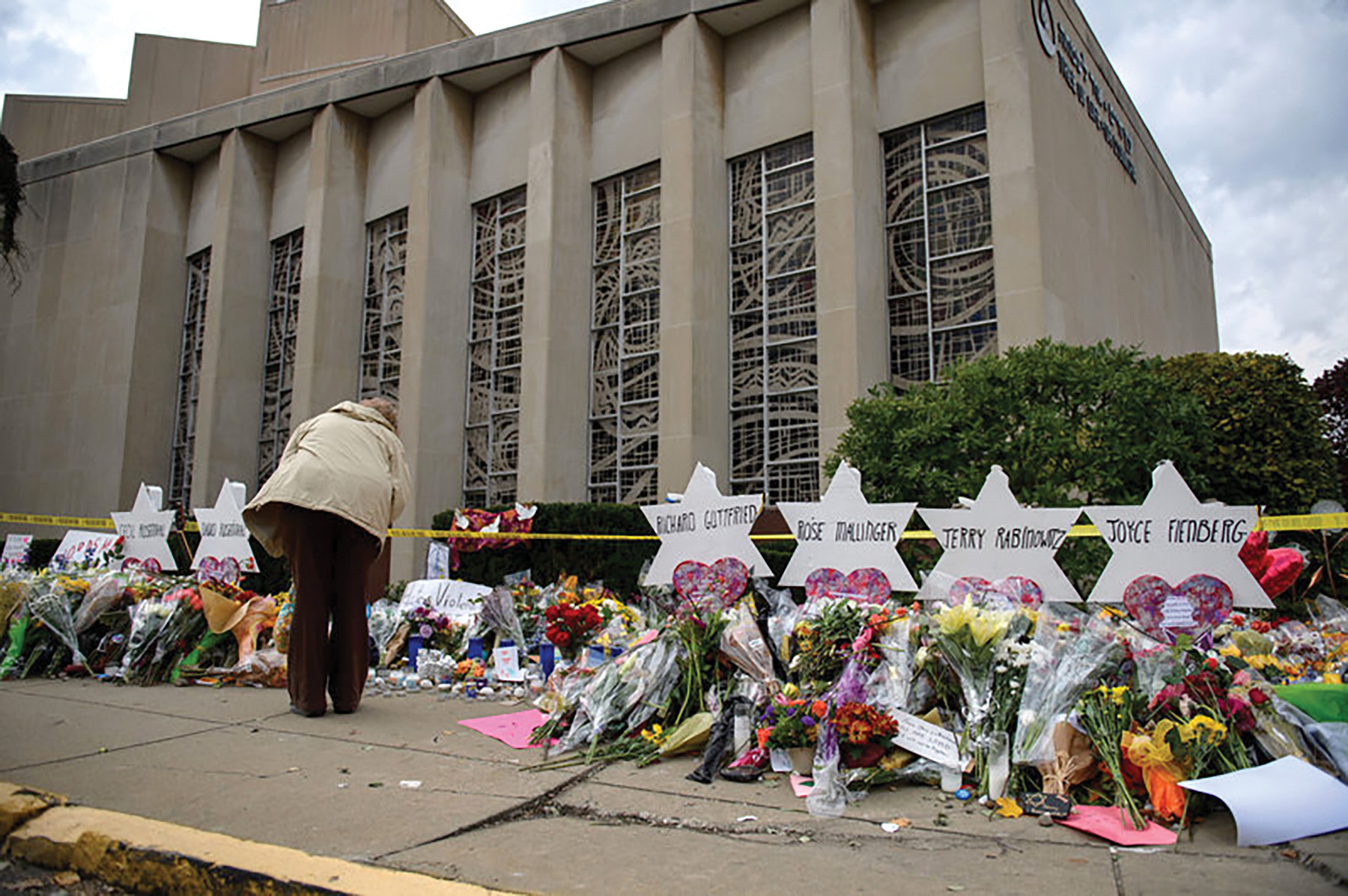 A memorial outside the Tree of Life Congregation in Pittsburgh, site of the October shooting rampage that killed 11 worshippers. Getty Images

The movement from tragedy to joy found a parallel in the Megillah reading, as my friend Yitz Francus expertly alternated between the minor key of the cantillation for the Book of Lamentations and the major key of the main musical cantillation for the Book of Esther. Yitz might as well have been singing his own song. Five years ago, he had a brain hemorrhage and, somewhat like the miracle that saved the ancient Israelites in the Purim story, he survived because of the miracle of modern medicine, and with no residual damage. To add a grace note to the theme of deliverance, Yitz’s father survived Auschwitz and, at 92, is studying Talmud every day.

Yet scars still remain, for Pittsburgh’s Jewish community, the police officers, those at Mother Emanuel and for the Muslims who attended the Megillah reading only days after the tragedy in New Zealand. But there is comfort in the grief we all bear. Last November, members of the Islamic Culture Centre of Quebec City that had been attacked in January 2017, leaving six dead, met with members of the three affected Pittsburgh synagogues at the Oakland mosque not far from Squirrel Hill. The men drove 12 hours each way so they could speak to us and share their experiences. When one of them spoke about his sadness when his son said he is afraid to go to the mosque, I told him that was my daughter’s fear too, that no one would want to come to shul anymore. We discussed security precautions and the trauma therapy that has helped their community feel safe.

As the makeshift interfaith choir that filled the synagogue ballroom raised its voice against Haman —a powerful chord struck against hatred — I didn’t cry. But I did earlier in the day, delivering my mishloach manot Purim baskets, which were canvas lunch bags imprinted with the phrase “Won’t You Be My Neighbor,” Mr. Rogers’ tagline. At one stop, at the house of a woman who lives directly behind Tree of Life Synagogue, she stared out at the site of the attack and, as I handed her the bag of goodies, said, “Nothing has changed.” She was trying to plead for normalcy. But for me, though I want to acknowledge that nothing has changed, of course everything has, and so the tears flowed.

Back at the Megillah reading, a member of the Islamic Center of Pittsburgh pointed upwards and said to me that maybe the creator wants us to come together in the aftermath of attacks on both of our communities. I assured him that I planned to be in attendance on Sunday with a group of Pittsburgh Jews to greet the center’s students after their classes; we were going there to let them know that they too have “helpers” close by as they cope with whatever fears they may have.

In the days after the groggers and costumes were put away and our interfaith neighbors were back in their own houses of worship, I received an email from an attendee at the Megillah reading. Campbell Robertson, a New York Times national reporter who lives in Pittsburgh, wrote that he felt “the lightness of the evening, the laughter and general sense that we were in a roomful of good people, given what we (from life and from the Book of Esther itself) know of the world, was stirring.”

Fred Rogers would have been proud.

Beth Kissileff, who lives in Pittsburgh, is a writer and regular contributor.