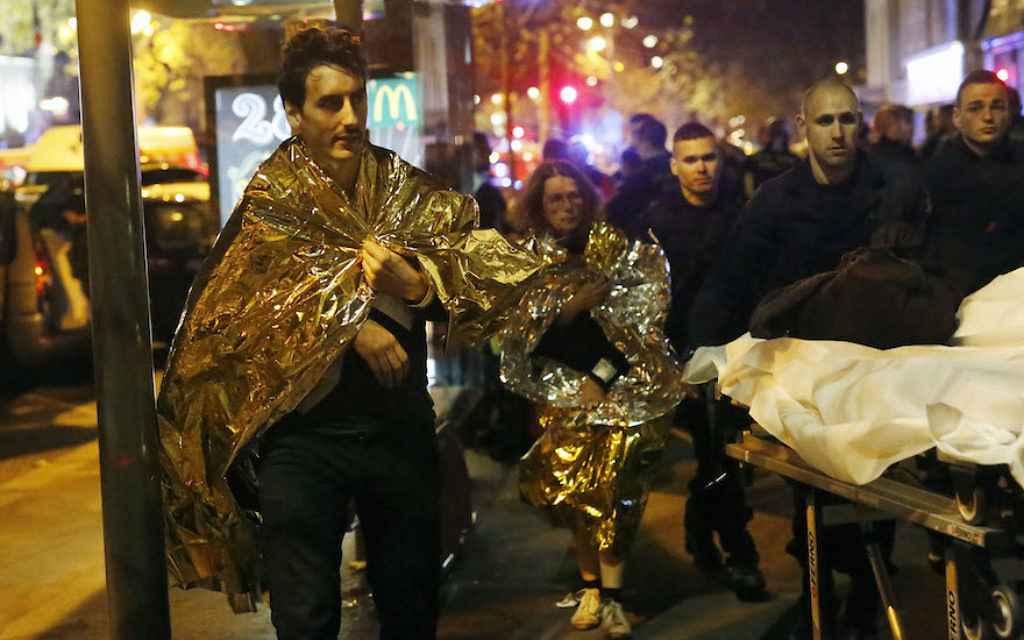 Paris — My son and I met in Paris on Friday morning, walked the charming streets of the City of Light, visited the Picasso and Pompidou museums, then went to synagogue at the MJLF (Mouvement Juif Libéral de France), one of the most vibrant Reform synagogues in Paris.

Rabbi Delphine Horvilleur, a respected French journalist and graduate of Hebrew Union College-Jewish Institute of Religion in New York, who had been my student about a decade ago, presided over a full house of committed French Jews who sang with spirit and prayed with intensity. We enjoyed the familiar liturgy set to unfamiliar tunes, the two young people getting ready for their b’nai mitzvah in the morning, the aufruf for a young soon-to-be-married couple and the very warm welcome of the entire congregation. Aside from the heavily armed soldiers out front, a staple in European synagogues for a long time already, and the mental workout of comprehending a sermon given in French, it felt very much like home.

From there we went to Rabbi Horvilleur’s apartment in the Marais, the historic Jewish district, for Shabbat dinner with her beautiful family and some friends. We made blessings, ate delicious food, sang songs, chatted about the Jewish community, her professors and colleagues, and caught up in the manner one does with cherished friends one does not see often. As usual, our phones were left untended out of respect for the peace of the Sabbath.

Alas, such an idyllic Sabbath peace was not to be. First my son’s phone began vibrating wildly, and after this went on worryingly for some time, in his concern he checked it. It was then that we learned of one attack, then another, and still more. Friends of his at the Stade de France stadium watching the France-Germany soccer match wrote of hearing explosions, attempting to evacuate, being held in place. One young female friend was trampled as the crowd surged and exited.

Soon the awful details of a night of unspeakable atrocity began to become clear. Restaurants just blocks away became scenes of carnage, a well-known concert hall the site of a hostage crisis and, later, a heinous massacre. French President Francois Hollande asked everyone to shelter in place as police and security forces tried to respond to multiple incidents. The streets were eerily empty, and heavily armed police and military were deployed everywhere. Friends and family were looking for loved ones they might not see again. There were endless texts and emails, most of them answered — some tragically not.

The next day when that same congregation gathered, they celebrated those two b’nai mitzvah with all their might because terrorism simply cannot be permitted to win. The strength of such an action speaks volumes about the Jewish community of France. But when they recited the prayer for the French nation, their eyes were not dry, their sadness was profound and their sobbing was audible. Terror had, once again, turned singing into mourning, but it could not overcome the essential power of sacred community.

When we walked the streets on Shabbat afternoon, we came across many reminders of the tragedy of the prior evening. Closed were Paris’ stores, museums, educational institutions and government buildings. Signs everywhere proclaimed three days of national mourning and cancellations of concerts, lectures, gatherings and cultural events. Even with the streets less populated, people eyed each other warily, faces lined with creases of concern, moving swiftly to the other side of the street upon even the slightest provocation. Outside hospitals, donors lined up in great numbers to give blood. Small memorial gatherings arose contrary to police instructions, with participants lighting candles and singing “La Marseillaise,” France’s national anthem. The names of victims started to trickle out. And the names of the perpetrators, too. Hope and fear walked hand in hand with us on those streets.

Over the past two decades, I have watched with my own eyes as a plane hit the World Trade Center. I have listened from a few blocks away as bombs detonated in cafes in Jerusalem. And now, I have lived through a night of deep evil in the streets of Paris. I know that the depths of our mourning over yet more senseless and heartbreaking loss of life will eventually be lifted once again at some point. Peace loving as I am and always try to be, it is at times like this that I yearn for a powerful, just and decisive response. I am aware that this is not simple, but given the awful circumstances and the dangerous potential for future violent acts like these, it now seems vital.

I hope the Western world will have the strength needed to take difficult but necessary action in the days and months ahead. At some point, when the time is right, I also hope that God, of whom Psalm 30:11 speaks, will “turn our mourning into dancing and remove the sackcloth and clothe us,” once again, “with joy.” In the meantime, though, may the memory of those innocent individuals whose lives were brutally taken this past Shabbat be a blessing to humanity and our community. May their families find comfort, and may they rest in peace.