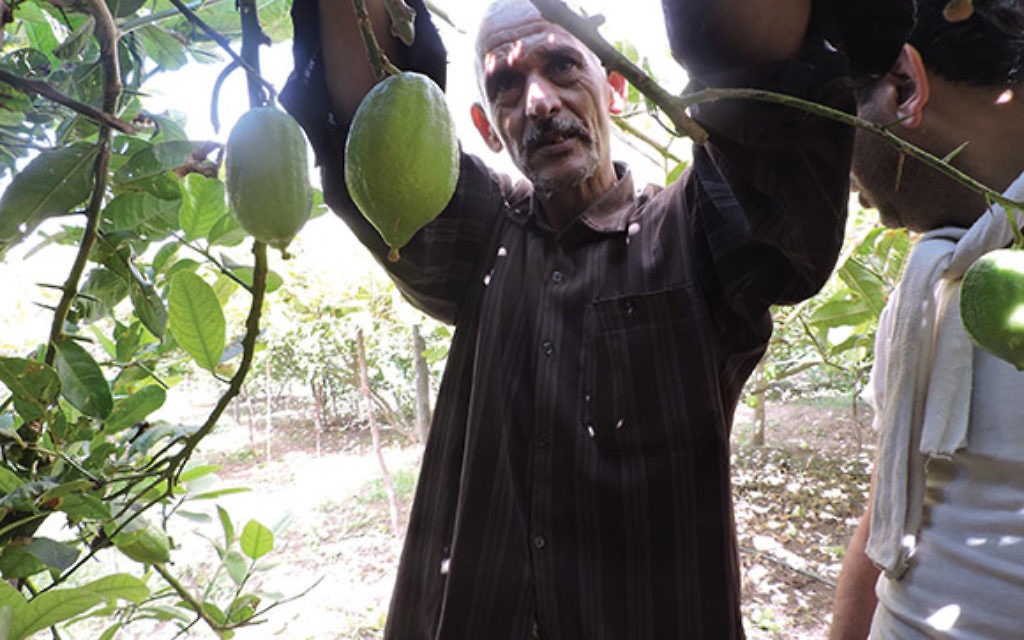 Assads, Morocco — Why the Jews want etrogs each fall, Mohammed Douch does not entirely understand. What he does know is that Jewish buyers are his main customers.

Each August and September, Jewish merchants come from around the world to his remote grove in the highlands of Morocco — an hour-long hike through mountains, over rocks and along cliff sides.

Most of the year, Douch, 67, a retired restaurant worker, lives in the northern coastal metropolis of Casablanca. But every summer he moves into a structure with dirt walls and a roof made of branches outside this village in the Atlas Mountains to grow etrogs.

Douch and his grove are part of southern Morocco’s small and unlikely etrog industry, which has popped up here each summer for centuries. Like many Moroccans, Douch is Berber. Almost no Jews live in Morocco, but a few dozen Jewish merchants support the industry, sending etrogs — called citrons in English — to Jewish communities on three continents for Sukkot. On the fall harvest holiday, Jews are commanded to pray with a fragrant, colorful collection of four plants, including the etrog.

And even though Morocco does not have formal relations with Israel, the etrogs make it there, too. Because 5775 was a “shmita,” or sabbatical year, when Jewish law prohibits agricultural activity in Israel, demand for etrogs grown in Morocco is especially high this season.

“The etrogs from the mountains have a special shape, and they have a beauty we don’t find in other places,” said Naftali Levy, a French etrog merchant.

Crouched on a narrow dirt path last week, Douch surveyed his small etrog grove through intense eyes lined with deep wrinkles. The trees’ branches grew only a few feet high, sloping down an uneven embankment in tangles of large, oblong leaves. The bright green etrogs hung just inches from the rocky soil. Beyond the grove were sandy brown mountains covered in palm trees.

Douch cultivates the etrogs the same way his grandfathers did, and in the same place. “We are attached to our town, and it’s obligatory to visit our original town,” he said. “We cannot leave our town because it’s a part of our body.

Jews were the first Moroccans to plant etrogs — near Marrakesh as far back as 2,000 years ago — said Hebrew University agriculture professor Eliezer Goldschmidt. Their Berber neighbors adopted the crop and continued to grow a small number of etrogs after the Jews left for Israel starting in 1948. Jews have bought the yellow fruits from Berbers for Sukkot ever since.

There are no statistics on the etrog industry in Morocco, but up to hundreds of thousands of etrogs leave the country each year. Merchants said most of the fruits go to Europe, the United States and Canada. Israel began importing etrogs from Morocco in 2013.

“Morocco has a very similar climate to Israel, and the etrog tree is a very sensitive tree,” said Chaim Pauli, co-owner of Elli-Chai’s Judaic Treasures in Silver Spring, Md. He ordered 1,200 Moroccan etrogs this year to avoid complications from shmita.

For Jews, a good etrog is aromatic and yellow when it is used. But Douch doesn’t know that. The etrogs he delivers are several weeks away from being that ripe, and are instead green and odorless. The yellow ones he feeds to animals.

Yitzchak Levy, a merchant with 30 years’ experience (and Naftali Levy’s father), said he looks for an etrog to be tall, with vertical protrusions and unscratched skin. Levy said he buys approximately 1,000 etrogs a year, paying about $7 to $10 for each one and selling the best specimens for hundreds of dollars.

When the etrogs come from mountain growers like Douch, young local men transport them back along the trail to Agadir in baskets that can weigh more than 100 pounds. Each etrog is wrapped tightly to prevent the pitom, or tip, from snapping off.

When an etrog tumbled out of a basket at Douch’s grove, he and his workers gasped. It was, thankfully, unharmed.