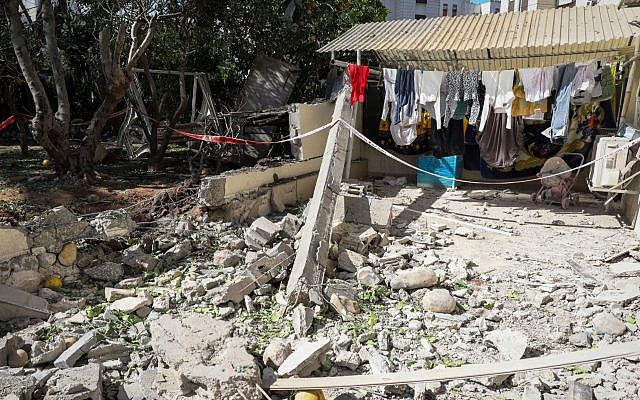 An apartment building hit by a rocket fired from the Gaza Strip in Ashkelon, in southern Israel, on May 5, 2019. JTA

As a sense of quiet, however temporary, returned to Israel this week after the fiercest and deadliest escalation of the conflict with Gaza in five years, Israelis were asking what prompted the latest flare-up and what, if anything, it achieved. The answers are difficult to assess.

The facts are somber. Four Israeli civilians and an estimated 30 Gazans, mostly terrorists, were killed. Some 700 rockets were fired at Israel, most of them intercepted by Iron Dome, Israel’s air defense missile system. But the strikes from Gaza reached the southern city of Ashdod, where one person was killed, and the damage was the most extensive the city has experienced. Israel responded by striking 350 military targets in Gaza.

This latest round began when snipers from Islamic Jihad, a smaller but seemingly more defiant terror group than Hamas, fired at Israeli soldiers last Friday. The fact that Israeli officials cited Islamic Jihad, rather than holding Hamas responsible, as they usually do, suggests that the IDF is concerned the group now has more rockets in Gaza than Hamas and is more willing to use them.

As for the timing, some experts believe the Gazan fighters wanted to disrupt Israeli Independence Day this week and embarrass Israel on the eve of its hosting of Eurovision, the biggest international singing competition in the world. The event brings prestige, recognition and economic benefits to the host country.

Gaza is on the brink of economic collapse and its leaders may have felt that the show of firepower would take the political pressure off of them, and that Israel would not want to escalate the fighting so close to Independence Day and the Eurovision festivities. In recent weeks Egypt had been mediating between Hamas and Jerusalem over allowing funding from Qatar into Gaza to continue, expanding Gaza’s fishing zone and permitting more supplies into Gaza, while Israel sought an end to the sometimes-violent border protests and incendiary balloons into Israel.

The cease-fire does not call for any significant changes, though, and some predict the fighting will return in a few weeks, after the month of Ramadan. What has not changed is that Islamic Jihad, which, like Hamas, is committed to Israel’s destruction, is a loose cannon, and the Palestinian Authority lacks the will or ability to be a stabilizing influence. Israel feels stymied because if it eased up on the security blockade, Hamas and Islamic Jihad would bring in more and deadlier rockets.

Dan Meridor, who served in numerous Likud coalitions and chairs the Israel Council on Foreign Relations, reflected this week that on the eve of Israel Independence Day, the state has but one very real national enemy: Iran. Speaking here at an event sponsored by the Jerusalem Press Club, he noted that relations with Egypt, Jordan and Lebanon are not a problem, and the same applies to Saudi Arabia and the Gulf states, with cooperation taking place under the radar.

But Iran, which controls Hamas and Islamic Jihad in Gaza, Hezbollah in Lebanon and seeks the end of Israel as a Jewish state, is a constant danger — perhaps to the U.S. as well. The administration is putting more pressure on Iran through sanctions, and Tehran is said to be ready to break the 2015 nuclear deal and revive its nuclear program as well as target U.S. forces in the region.

Last week’s escalation in Gaza was a sobering reminder that while the status quo is a constant danger, there is no indication of a strategic plan that would change the equation.