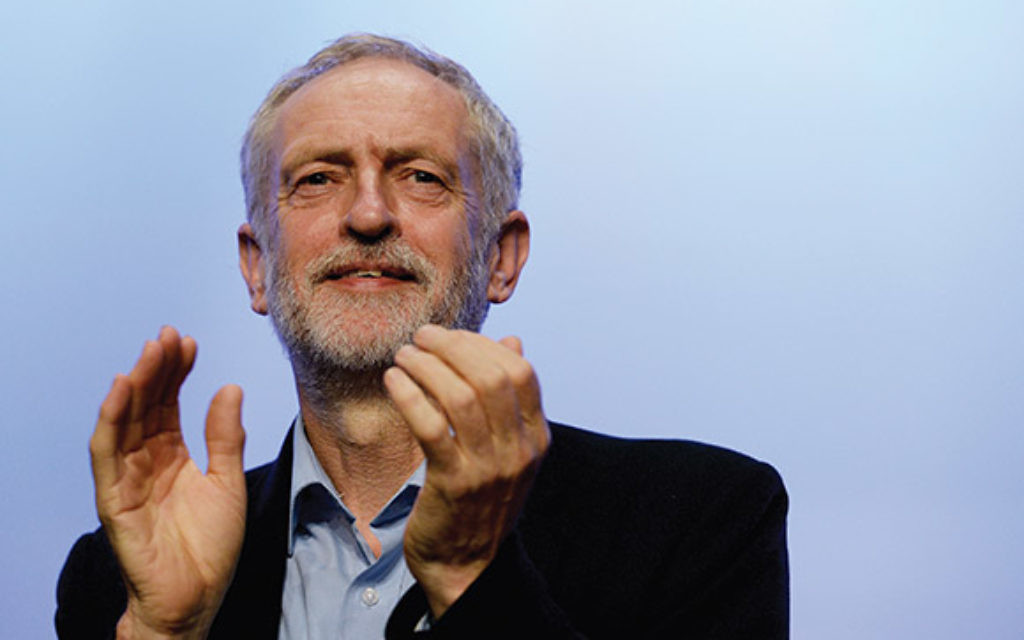 Jeremy Corbyn, the new head of Britain’s opposition Labor Party, has many of the makings of a hero for British Jews.

A Labor lawmaker with over 30 years of experience, Corbyn passionately and eloquently defends blue-collar Britain, multiculturalism and a left-of-center notion of social justice. These are issues that resonate with Britain’s 250,000-strong Jewish community, which has historically leaned Labor.

Yet Corbyn’s election earlier this month has generated unprecedented concern in British Jewry’s ranks, where many resent his Israel-critical views and endorsement of anti-Semitic enemies of the Jewish state, including Islamist militant groups Hamas and Hezbollah.

Following an acrimonious exchange of allegations during Corbyn’s campaign for Labor leader, he and representatives of British Jewry may now find they need to mend fences and figure out a way to work together.

“The problem is not that Corbyn is an anti-Semite or a Holocaust denier — he is neither,” said Dave Rich, a spokesperson for the Community Security Trust, British Jewry’s main watchdog. But Corbyn “seems to gravitate towards people who are, if they come with an anti-Israel sticker on them.”

Corbyn, 66, who has visited the West Bank, the Gaza Strip and Israel nine times, publicly endorsed a blanket arms embargo on Israel and the boycott of Israeli universities involved in weapons research.

Jonathan Sacerdoti, a Jewish political commentator and journalist, said Corbyn’s election “and failure to convincingly and definitively distance himself from his endorsements of anti-Semitic entities is sure to embolden the anti-Israel camp, and its anti-Semites.”

Ambrosine Shitrit, co-founder of Yad B’yad, a right-leaning British anti-Semitism watchdog, called Corbyn’s election “one of the most tragic things to have happened to Labor.”

Corbyn’s Jewish critics have said that if he is to be trusted, he must first clarify or backtrack from a string of gestures he made toward anti-Semitic individuals and groups.

Famous among those gestures was his use during a speech he made in 2009 of the term “friends” to describe activists from Hezbollah and Hamas.

“Tomorrow evening it will be my pleasure and my honor to host an event in parliament where our friends from Hezbollah will be speaking,” Corbyn said of members of the Shiite Islamist militia and political party, whose leaders have made numerous anti-Semitic statements.

On Hamas — a Palestinian Islamic military and political group whose charter proclaims “a very great and very serious struggle against the Jews” — Corbyn said, “I’ve also invited friends from Hamas to come and speak as well. Unfortunately the Israelis would not allow them to travel here.”

Corbyn denied the claim and said during a television interview in July that he did not agree with Hamas and Hezbollah. He called them friends only, he said, as a figure of speech. He defended his talks with militant Islamists by comparing them to right-wing Israelis, “who have the same view possibly that the state of Israel should extend from the river to the sea.”

His explanations failed to convince supporters of Israel and Labor Jews, including lawmaker Ivan Lewis, who following Corbyn’s election quit his Labor position as shadow secretary of state for Northern Ireland.

Lewis challenged Corbyn to attend a meeting on anti-Semitism on the political left, and Corbyn accepted this week. The meeting, Lewis said, is meant in part to address “Jeremy’s support in the past for people who have used anti-Semitic rhetoric.”

Corbyn faces a chorus of other Labor critics, including former British Prime Minister Tony Blair, who say the Labor leader’s radically socialist views on the economy will either split Labor, make it unelectable as a ruling party or both.

One of the most dramatic twists in Corbyn’s strained relationship with British Jewry’s establishment unfolded on Aug. 14, when The Jewish Chronicle — neither a right-wing publication nor one prone to making unfounded claims — warned in an editorial that Corbyn risked being “regarded from the day of his election as an enemy of Britain’s Jewish community.”

Speaking for what the paper said was “the vast majority of British Jews,” the Chronicle’s unusually harsh-worded editorial spoke of “deep foreboding at the prospect of Mr. Corbyn’s election as Labor leader.”

Yet British Jews also have an interest in working with Corbyn, as evidenced in a Sept. 12 statement by Simon Johnson, CEO of Britain’s Jewish Leadership Council, an umbrella group with representation by the Board of Deputies of British Jews.

Despite “a number of concerns regarding some of Mr. Corbyn’s past connections,” Johnson wrote, “We will, as we always have, find ways of working with Her Majesty’s Opposition on matters relevant to us.” He added, “We hope that the Labor movement remains a welcoming environment for members of the Jewish community, many of whom have lifelong commitments to it.”

Johnson’s statement reflects a mutual need by Corbyn and the British Jews for cooperation. This need will prevail — perhaps through a succession of low-key, trust-building encounters — over the current atmosphere of distrust, according to Keith Harris-Kahn, a London-area Jewish sociologist and editor of the Jewish Journal of Sociology.

“It’s a very bad idea for the Jewish community to not have workable relationships with the major opposition party,” Harris-Kahn said, citing the community’s need to avoid partisanship and promote its interest in various British parliaments.

For Corbyn, Harris-Kahn said, “as a politician aspiring to be the prime minister of a multicultural country, it’s a very bad idea for him to be alienated from the majority of one significant British minority.”