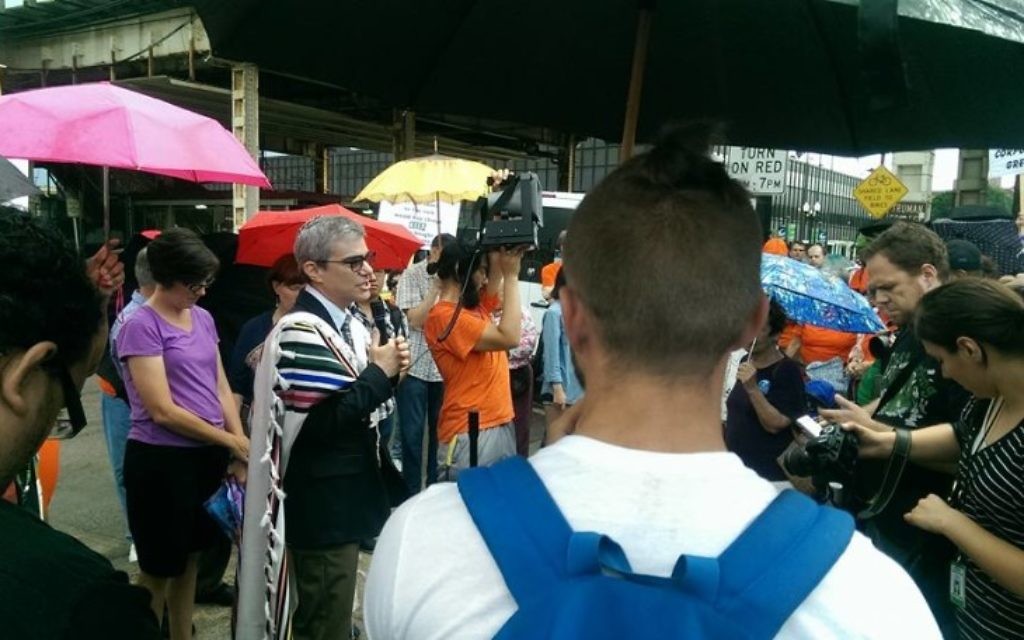 An Israeli flag next to the rabbi’s podium, a synagogue-wide Israel Independence Day celebration, a prayer for the state of Israel during services — for many, these are innocuous if not positive parts of American Jewish congregational life.

For Rabbi Brant Rosen and his future congregants at Tzedek Chicago, a new synagogue that identifies as non-Zionist, these are symbols of a nationalism-infused Judaism, which he thinks is not only unnecessary but harmful.

“We believe that that’s led to some very dark places and that the establishment of an exclusively Jewish nation-state in a land that has historically been multiethnic and multireligious has led irrevocably to the tragic issues that we’re facing today,” Rosen said.

The synagogue’s non-Zionism, he said, is about “bearing witness to oppression, particularly when it’s being done in our name as Americans and as Jews.”

A nondenominational synagogue with a focus on social activism, Tzedek Chicago will officially open in September with the start of the High Holidays and will share facilities with Luther Memorial Church in Chicago. The congregation is arguably the first American synagogue to self identify as non-Zionist in its mission statement.

Rosen, who served as rabbi of the mainstream Jewish Reconstructionist Congregation in Evanston, thought he’d retired from pulpit work. But people sought him out to discuss creating a new congregation.

“There are increasing numbers of Jews out there, particularly young Jews, who don’t identify as Zionist and resent the implication that somehow to be Jewish today one must be Zionist,” said Rosen, who previously co-founded the Jewish Voice for Peace Rabbinical Council. Jewish Voice for Peace is an American Jewish organization opposed to Israeli military presence in the West Bank, the Gaza Strip and East Jerusalem.

“We are really a community for Jews who don’t reduce their Judaism to narrow political nationalism. As far as I know there aren’t any other congregations out there who describe themselves in those terms.”

So far, the congregation has approximately 85 members, from millennials to older adults, Rosen said.

For some, such as steering committee member Mark Miller, the synagogue is a welcome development.

“For those of us who are progressives and really have problems with the human rights abuses and other problems we see in modern-day Israel, this is a way for us to take a step away from that and have a congregation that is not aligned,” Miller said.

Rosen has experienced a swell of support but also some pushback from the wider Jewish community.

“I think you cannot cut off Israel from Judaism,” said Rabbi Josh Weinberg, president of the Association of Reform Zionists of America. Weinberg grew up in Chicago and taught in a high school program with Rosen in 2002. “The word ‘Judaism’ was the religious affiliation of the people who lived in the land of Judea. All of our Jewish expression, Jewish identity, everything we say in our prayer books is all geared towards Israel, our nationalist existence in a particular geographic location.”

For Weinberg, the state of Israel is a central component of Jewish identity and connects American Jews to a sense of peoplehood.

“Does that mean that, just because we have a spiritual and a covenental relationship with the state of Israel, that we always have to agree with everything the state of Israel does politically? No, far from it,” he said. “But I want (improving Israel) to be a project all Jews around the world participate in. And to hear about a synagogue that’s trying to cut off those ties because of politics or policies is sad to me.”

But is Tzedek Chicago an outlier on the fringe of mainstream American Judaism or the first manifestation of a growing trend?

Theodore Sasson, senior research scientist at Brandeis University’s Center for Modern Jewish Studies, noted that Jewish non-Zionism isn’t new. Ultra-Orthodox sects such as Satmar or Neturei Karta have long been ideologically opposed to the state of Israel, based on their belief that a Jewish nation-state should only exist when the messiah comes.

Similarly, many liberal Jews were non-nationalist before Israel’s founding in 1948. After that, the majority of Jews identified as pro-Israel, Sasson said.

Rather, the synagogue is one example of the plurality and diversity of U.S. Jewish voices, particularly in relation to Israel, said Sasson.

He stressed that despite the widening spectrum of Jewish public opinion, the majority of Jews hold various political positions within a pro-Israel framework. According to the most recent Pew Research Center study on American Jews, in 2013, 7 out of 10 Jewish Americans feel some level of attachment to Israel, which has remained consistent since 2000.

“There is not a flight from Israel among American Jews,” said Sasson. “My impression is that Israel continues to serve as a focal point for Jewish identity in the United States, even if increasingly that means that Israel serves as something to argue about.”

Zionist Organization of America President Morton Klein dismissed the emergence of one non-Zionist synagogue as significant.

Statistically, he said, “they don’t exist.”

While Rosen would likely beg to differ and expects to see more congregations like Tzedek Chicago pop up, he’s unconcerned with the niche quality of the new synagogue. “We don’t expect to be for everyone,” he said.

Rosen is concerned that Tzedek Chicago will be pigeonholed as “the non-Zionist synagogue,” when that issue is only a fraction of what the synagogue hopes to stand for, he said.