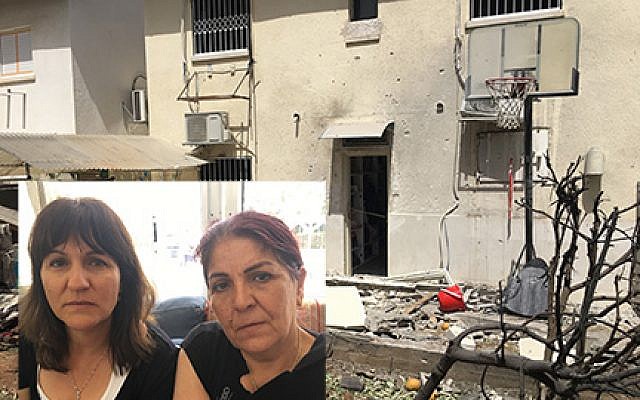 The Ashkelon home of Moshe Agadi, who was killed in a rocket attack from Gaza when he stepped outside for a cigarette. Inset: Agadi’s sisters, Cheli Mualem and Janet Tverya, sitting shiva in a nearby home. Nathan Jeffay/JW

Ashkelon, Israel — Somehow, the fiberglass backboard in Moshe Agadi’s backyard here was still standing, as if some neighborhood kids were about to drop by for a pickup game.

The rest of the backyard was a shambles — tree branches snapped off, their grapefruit load browning in the rubble, concrete and wood strewn everywhere, shrapnel pockmarks ringing the back door. It was what remained from a Gazan rocket attack — that and a shell-shocked family trying to come to terms with the death of Agadi, 58 and a father of four, who was hit by shrapnel and killed after he stepped outside for a cigarette.

On Tuesday, two days after the attack, two bewildered-looking workmen toiled silently as they boarded up a blasted-out window in the Agadi home in this coastal town just miles from the Gaza border.

A short drive away, however, the shiva house was busy with comings and goings, the ancient rhythm of mourning taking hold. “Our mother was hospitalized yesterday after an issue with her brain,” said Agadi’s sister, Janet Tverya. “Of course, it was because of what happened, because of the pressure.”

People arrived with stories of Agadi’s kindness and charitable giving. One man, seemingly unknown to the family, decided to give an impromptu speech about his character. There was hardly any discussion of news and politics, with all attention on the family tragedy and sense of personal loss.

And yet, beyond the shiva house, politics was everywhere as a cease-fire with Hamas had taken hold following a weekend of rocket attacks, nearly 700 of them, and Israeli retaliatory strikes. In all, four Israelis and 25 Palestinians were killed.

As citizens emerged from bomb shelters, Benjamin Netanyahu said that Israel has “changed the rules of the game” regarding its policy for fighting Hamas, putting the country in a stronger position.

Far from the “rules” changing, the last few days reminded everyone of the depressing cycle in which Israel and Gaza militants are caught.

When Netanyahu told us that things have changed, he said that Israel resumed the policy of eliminating terrorists, killed “dozens” of Hamas and Islamic Jihad terrorists, and “knocked down terrorist buildings.” This isn’t new. It’s the traditional doctrine of dealing a blow to terrorist capabilities when Israel or Israelis are targeted.

Gaza militants weren’t humiliated. Far from it. They actually gave Israelis a stark reminder that, however regular life feels, they can throw the country into crisis mode in moments.

Over the last year, Israel celebrated its 70th birthday, welcomed Prince William, hosted the massive international cycling competition Giro d’Italia, held elections and so on — without militants getting in the way. Israel has been busy showing the rest of the world just how normal it is.

This infuriates the militants of Gaza who were determined, as Israel prepares to host one of the world’s biggest musical events next weekend, to challenge this image. It was too big an opportunity to be missed.

The Eurovision Song Contest — huge in Europe though little-discussed in the U.S. — is designed especially to attract huge television audiences internationally. All eyes will be on Tel Aviv for the final round next Saturday, and Israel is determined to convey the image of a stable, safe, Western country.

As militants fired rockets, they had every Eurovision delegation — long after they rejected the boycott calls and agreed to come to Israel — closely following the news and re-evaluating Israel as a security headache. The militants had Israelis considering the “what if?” scenario.

If foreign performers cancelled, the whole competition could easily have been derailed, with Israel left embarrassed and discredited as a host for other international events. What’s more, had the fighting continued, Israel would have marked its 71st Independence Day in the midst of conflict.

The militants didn’t just showcase their ability to shake Israel, but also to turn Qassam rockets into cash. Part of the backdrop to the violence is that Hamas wants to ensure that Israel continues to allow Qatar to make big cash transfers to Gaza, and to allow larger transfers if Doha agrees to contribute more.

The militants were also sending a message to Qatar, namely that the payments are important enough for Hamas to fight for. It took just one day after the end of the fighting for Qatar to promise $480 million to the Palestinians, a large part of which will end up in Gaza. Hamas leader Ismail Haniyeh jubilantly thanked Qatar for the “honorable grant.”

This ending is a bad one because of what it means inside the Palestinian political sphere.

The money will flow to Gaza, where Hamas is in control, and also to the Western-backed Palestinian Authority in the West Bank. This is good news, right, as the money will go to moderates as well as militants? Not really.

The PA is in the throes of a financial crisis. Qatar is coming to the rescue. Not America, as it used to when the PA faced financial woes — the cut in American funding to the PA is part of the reason for the crisis.

Today, it is Hamas’ hardline sugar daddy Qatar that is injecting cash into the PA, and it looks to many Palestinians like Hamas’ violence, rather than the PA’s diplomacy, has prompted the payout.

Hamas has made itself seem highly relevant while the PA has ended up looking weak, and Qatar now wields influence over the PA formerly wielded by the United States. Given that Hamas is an extremist militant organization and the PA is — despite its problems — the best partner for negotiations with Israel, this is a very troubling picture.

Back at the Agadi shiva house, Janet Tverya seemed to sense the complications, and perhaps the futility of any action on Israel’s part. She’s not in favor of sending Israeli soldiers into Gaza, which could deliver a crushing blow to Hamas. She seemed resigned. “There is no simple solution,” she said. n