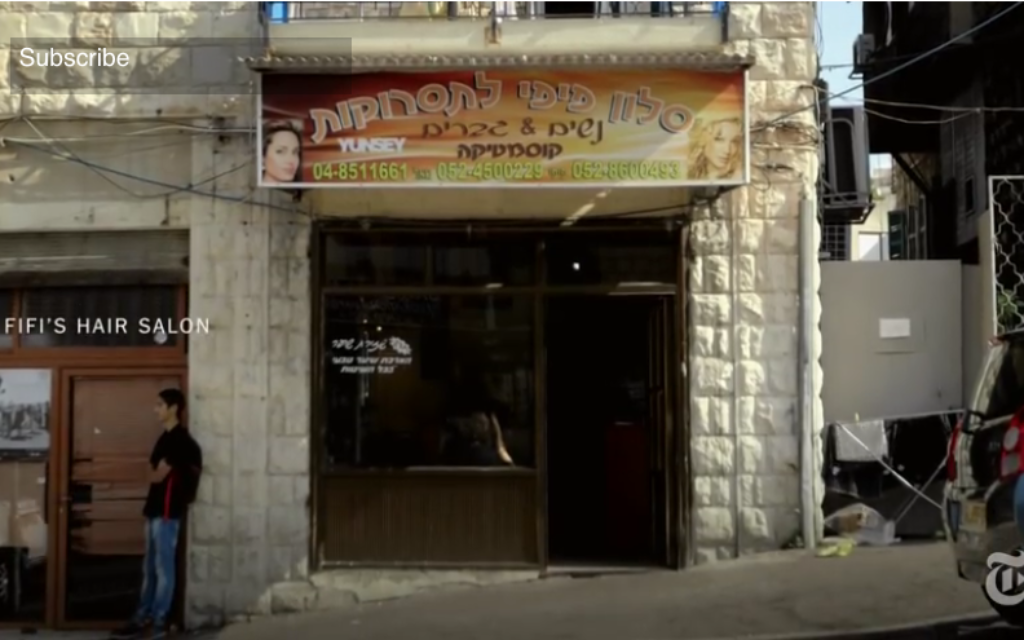 Jewish-Arab coexistence in Israel has never looked so sudsy.

The New York Times opinion section on Tuesday featured part of “Women in Sink,” a short documentary set in a Christian-Arab hair salon in Haifa.

The Jewish-Israeli filmmaker, Iris Zaki, wrote in the short essay accompanying the video that she initially set out to make a film about Israeli Arabs, a community she believes is treated unfairly.

“I never expected that to do that, I would find myself in a hair salon of all places,” she said.

Zaki, a Haifa native now based in London, ended up working in Fifi’s salon as a hair washer and often left her camera just above the rinsing sink.

As it turned out, the salon proved to be the perfect venue for capturing candid thoughts on the Arab-Jewish relationship from everyday Israeli women. Haifa has long been celebrated as a symbol of Arab-Jewish coexistence, but Zaki’s final product yields more memorable quotes than the average slice-of-life film.

A Jewish patron says that if women were running the political arena in Israel, “we would have lived in peace with our neighbors ages ago.”

One of Fifi’s Arab owners, Nawal, says that talking about the difficulties that Israeli Arabs face doesn’t improve her situation in life.

Another Jewish lady tells Zaki she rejected her son’s demand that she stop going to Fifi’s after her family experienced a “very serious terrorist attack.”

Despite Zaki’s disapproval of her government’s treatment of Arabs and the occupation, she says making the film gave her some faith in people.

“Within a complex reality I found a little island of sanity,” Zaki says. “And I left not only with a film, but also with some hope.”