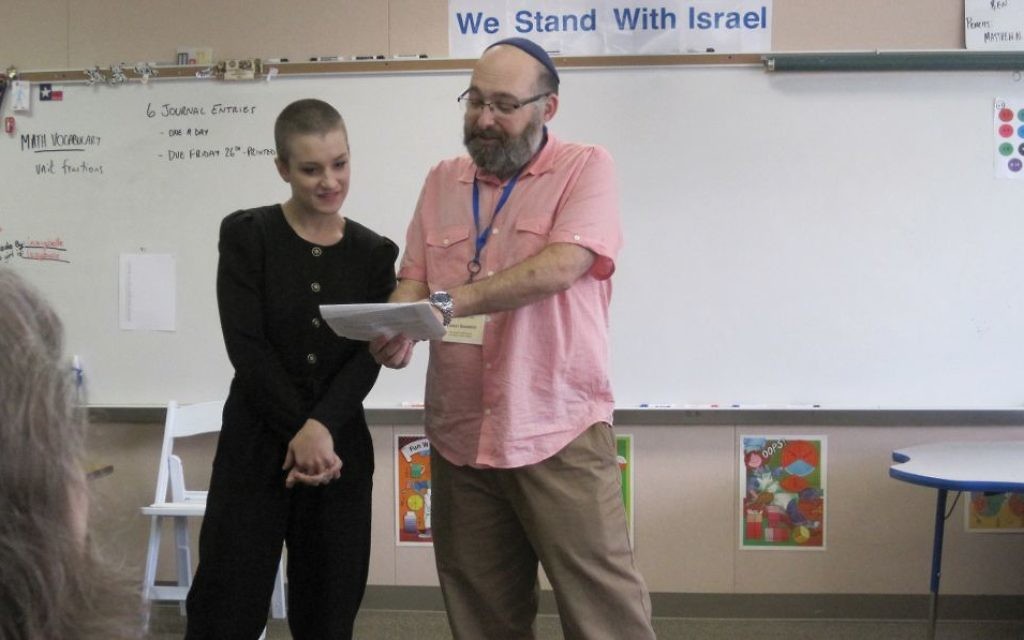 Houston — The Confirmation class at Congregation Jewish Community North, the final year of Jewish education for most of the teens in the Reform temple’s religious school, was on a familiar path early this year. Some text study, some discussion of biblical figures, some Jewish ethics.

Then one afternoon, the class took a detour.

Think up a story about a boy who lives in Spring, Texas, a community on the northwest outskirts of Houston’s Harris County, Rabbi Jonathan Siger, the congregation’s spiritual leader, who was leading the Confirmation class, told the students. Each student would, in turn, embellish the outline of the story with an emotion the rabbi would announce.

That’s a basic training exercise for students of improvisational theater, particularly for the kind that Rabbi Siger, 47, has studied at Chicago’s Second City, the country’s epicenter of comedy improv.

“I knew he liked improv,” says Samantha Johnson, a student in the rabbi’s Confirmation class. But she and her classmates did not know the rabbi would introduce improv practices into their Jewish education, something of a rarity in pedagogical circles. “A few were thinking, ‘He’s just joking.’”

The students quickly found out that Rabbi Siger was quite serious.

The student who spoke before her told the story from the perspective of happiness. Johnson, Rabbi Siger told her, was to talk about the boy with a mood of “sadness”; she told about the boy’s pet cat being hit by a car. “He cried and cried and cried.”

Johnson, a public high school junior whose family is active in Rabbi Siger’s 150-family synagogue, said, in a telephone interview, that she and her fellow students overcame their original skepticism about the rabbi’s unorthodox teaching technique; the improv methods they learned gave them greater respect for the value of Jewish tradition and made the stories about ancient figures whose biblical lives they learned seem more real, more contemporary.

Students learn improv’s foundational ethos of “yes, and,” which has each participant in improv situations accept other participants’ premise of a scene, never contradicting or changing what other men and women have introduced. The students learn to listen carefully, avoid making judgments or condemnations about other participants’ suggestions and how to work well in teams. The students participate in improv exercises that feature such aspects of the Talmud as the 39 categories of work that are forbidden on Shabbat. The students take part in acting out, on-the-spot, the lives of men and women whose struggles in the Torah they have studied.

There’s no right or wrong response in improv, Rabbi Siger says. “There’s no failure. There’s no script. You’re making it up. It’s transformative.”

“You realize that the stories of the Bible — they’re not just stories,” but reflections of real feelings that real people experienced thousands of years ago, Rabbi Siger said at a session he led at Houston’s Yom Limmud day of community-wide Jewish education earlier this year. His session was entitled “Holy Improv: Exploring Sacred Text through Theater Games.” Some of that day’s “scene setups”: Adam and Eve after their first night together, Noah on the ark and King David explaining why he had seduced Bathsheba.

“Human nature has not changed” through the millennia, the rabbi said.

It’s perhaps part of the reason why there is a growing popularity of improv training outside of the ranks of aspiring performers.

Improv pros are bringing the “yes, and” philosophy to conflict resolution, crisis management, corporate boardrooms, senior homes and hospices. “It’s an attractive concept for people looking to connect with fellow humans and unplug from the digital world,” the Wall Street Journal reported in a recent article about Second City. “Improv also jibes with other trendy philosophies, such as in-the-moment focus of meditation and the gospel of affirmation.”

Improv is proving particularly effective among teenagers — like Rabbi Siger’s Confirmation class students — who are often vulnerable to peer pressure and reluctant to risk other teens’ criticism. “Improv … gets a class full of students moving, playing and laughing … [and fosters] collaboration where everyone pitches in as an ensemble,” Second City’s website states.

“If you can get them [teens] to laugh, they’re yours forever. And you can teach them forever,” says Rabbi David Freelund, a friend of Rabbi Siger’s since rabbinical school two decades ago. “To know Jonathan as long as I have is to live with improv on a daily basis.”

“Improv offers rewards for students that are hard to come by through other teaching methods,” said Lisa Stone, a veteran Jewish educator in Texas. “I have become a strong supporter of improv in religious schools. I’ve been a fairly discussion-focused teacher, but improv has the ability to radically change students’ experiences in their classrooms.

“Improv, as directed by an experienced and aware instructor, has the potential to help students find new ideas and feelings in themselves,” Stone said in an e-mail interview. “It is effective because it’s personal, and it can be great fun for everyone even while being serious. It can be a great help to quiet students if managed well. And it should give rowdier students a chance to enjoy themselves within a positive structure.”

Goldstein says he knows of no other religious schools, of any faith, that use improv on a regular basis like Rabbi Siger does.

Rabbi Siger, who has taught improv principles to Jewish educators in Texas, and to pulpit colleagues at national rabbinical conferences, says he hopes to offer similar workshops to newly single adults who are coping with social anxiety, and to teens and adults on the autism spectrum.

A born and raised Bostonian who served at the Hillel chapter at the University of Florida, Rabbi Siger says his fondness for comedy improv mirrors his general approach to life. “I’ve been accused of being a ‘neo-chasid,’” a Reform offshoot of the chasidic philosophy that emphasizes singing and dancing and other joyous expressions of Judaism.

Samantha Johnson says the rabbi’s decision to bring improv to her Confirmation class this year fit in with her creative bent. “I love theater. I love the arts in general.”

Johnson says that when she got into the character of the boy whose pet cat had died, loosely based on her own experience of losing her own pet cat several years earlier, “my voice started cracking.”

The rabbi’s improv was an important aid to his otherwise standard classes about Jewish concepts and Jewish history, she says. “I retain more information.” She says it has strengthened her feelings about being Jewish, and taught her that “it’s OK to be different.”

An improv workshop will be offered at a regional conference of Reform teens that Johnson’s synagogue will host in December, she says. “I came up with the idea.”