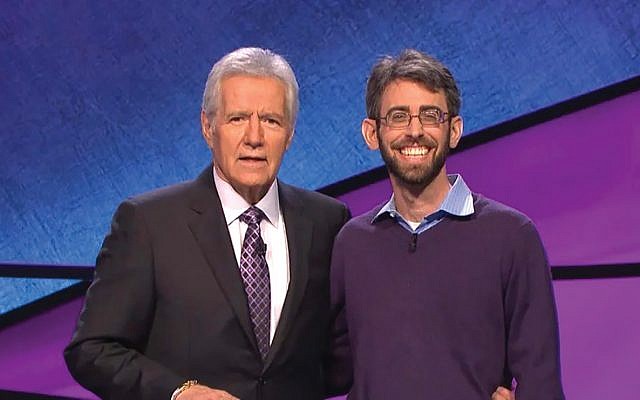 Rabbi Geoffrey Mitelman, right, who was a “Jeopardy!” contestant in 2016, says host Alex Trebek is “an incredible professional.” PHOTO COURTESY OF ‘JEOPARDY!’

Who is Rabbi Geoffrey Mitelman?

Rabbi Mitelman is a Westchester resident who is founding director of Sinai and Synapses, a New York-based educational organization that tries to bridge the gap between science and religion. Last week, he heard the news that Alex Trebek, the longtime host of the syndicated “Jeopardy!” television show, has been diagnosed with Stage 4 pancreatic cancer.

In making the announcement about the diagnosis, whose prognosis is usually very grim, Trebek stated, “With the love and support of my family and friends and with the help of your prayers also, I plan to beat the low survival rates statistics for this disease.”

“What can we do?” Rabbi Mitelman asked himself.

The answer was clear — as a rabbi, he could “offer a prayer service, for hope and healing and strength.”

He immediately sent out a notice to members of a private Facebook group of former “Jeopardy!” contestants, of which he is a member, asking if fellow members of the clergy would like to take part in an ecumenical prayer service on Trebek’s behalf.

With the rabbi serving as host, 11 Jewish and Christian clergy members offered non-denominational prayers or read excerpts of Scripture, and other participants formed a pair of ad hoc choirs to sing the Torah’s priestly blessing and the “What a Wonderful World” song.

Men and women in time zones “all across North America” took part in the service, which was conducted on Zoom Video Conferencing Rabbi Mitelman, who appeared on “Jeopardy!” three years ago, forwarded the nearly 20-minute service to the producers of “Jeopardy!” “I don’t know if Alex has seen it,” he said.

“‘Jeopardy!’ is a cultural institution. Anyone who has been on the show feels connected with Alex,” the rabbi said of his motivation for arranging the prayer service. “He is an incredible professional. It is an incredibly difficult job. He has to read 61 clues in 22 minutes, all at the same speed, at the same intonation.”

While interaction between the show’s host and the contestants is limited to a question Trebek asks each one at the start of the episode, some picture taking during commercial breaks, and a few minutes of schmoozing while the final credits roll, contestants invariably describe Trebek, 78, as warm and engaging.

“He was very kind and friendly,” said Marianne Novak, a rabbinical student at Yeshivat Maharat. Novak, who lives in Chicago and receives her education online and in monthly visits to the Riverdale institution, appeared on “Jeopardy!” in 2016.

During the Facebook service, she read the traditional Misheberach prayer for spiritual and physical healing, in Hebrew and English. She called the service a chance for one-time contestants to show their affection for Trebek, and to “show how social media can be used for good.”

It “was beautiful,” Novak said. “It brought together people of different faiths.”

For many contestants, the show, which has strict eligibility and qualification requirements, “was a highlight of their life … extremely exciting,” she said. “Part of the excitement was being with Alex Trebek.

“Here was a way we could give back.”

Rabbi Mitelman said the prayer service was a success.

No question about it.