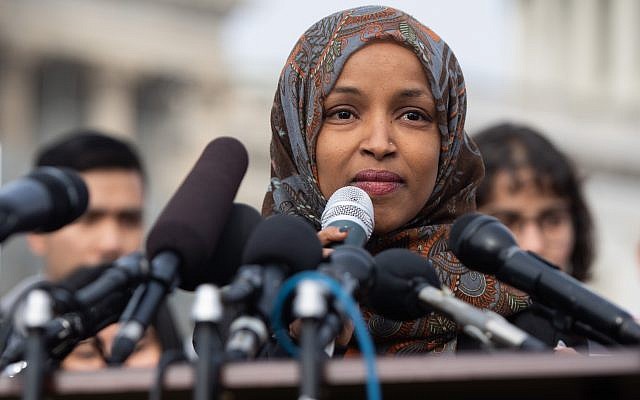 After Rep. Ilhan Omar (D-Minn.), one of the freshman Congress members, made anti-Semitic remarks criticizing Israel, Democratic leadership in Washington advanced a resolution condemning anti-Semitism, which passed on Thursday, March 7.

Omar said that she wanted “to talk about the political influence in this country that says it is OK to push for allegiance to a foreign country” while discussing criticism of Israel, according to the Jewish Insider. In Jan. 2019, Omar posted tweets suggesting that the American Israel Public Affairs Committee (AIPAC), paid politicians to be pro-Israel, which perpetuates harmful stereotypes about Jewish people, money and power. Not to mention the statement is completely false, as the AIPAC does not donate to or endorse candidates. In February, she also responded to a post on Twitter by Glenn Greenwald about how Republican House Minority Leader Kevin McCarthy was planning on taking action against Omar and Rashida Tlaib because of their criticism of Israel. She responded “It’s all about the Benjamins baby” in a now unavailable tweet. When Batya Ungar-Sargon, Opinion Editor at The Forward, criticized Omar for tweeting an “anti-Semitic trope” about money and Jewish people, Omar responded “AIPAC!” The notion that Jews are dually loyal and cannot be patriotic Americans is an age-old rhetoric that simply contributes to negative views of Judaism and the Jewish people. Additionally, implying that Americans support Israel solely because of money furthers those views.

Many Democratic Congress members accused Omar of anti-Semitic remarks. On March 2, Rep. Nita Lowey (D-N.Y.) tweeted “Gross islamophobic stereotypes… are offensive and have no place in political discourse. Anti-Semitic tropes that accuse Jews of dual loyalty are equally painful and must also be roundly condemned.” She continued in the thread with a separate tweet, saying “Lawmakers must be able to debate w/o prejudice or bigotry. I am saddened that Rep. Omar continues to mischaracterize support for Israel. I urge her to retract this statement and engage in further dialogue with the Jewish community on why these comments are so hurtful.”  Sen. Chuck Schumer (D-N.Y.) tweeted on Feb.11 “Rep. Omar’s use of an anti-Semitic stereotype was offensive and irresponsible. This kind of intolerance has no place in Congress—or anywhere in American society. No one should invoke anti-Semitic tropes during policy disagreements.”

In response, Democratic leaders in Congress have begun working on a new resolution condemning anti-Semitism. Eliza Collins, a USA Today reporter, posted images of the resolution draft on Twitter. Though the resolution does not specifically name Omar, it alludes to it. In the preamble, the resolution lists several examples of anti-Semitism, including accusations of dual loyalty, and the resolution says they “have an insidious, bigoted history.” It also lists “Jews control the banks, media, and U.S. government … and that Jews are obsessed with money” as a dangerous myth, presumably in response to remarks by Rep. Jim Jordan (R-Ohio), who used a dollar sign to spell the name of Tom Steyer, who is Jewish. In the action section of the resolution, it states that it “acknowledges the dangerous consequences of perpetuating anti-Semitic stereotypes… [and] rejects anti-Semitism as hateful expressions of intolerance that are contradictory to the values that define the people of the United States.” The resolution was approved last Thursday, March 7 in the House of Representatives, with a landslide vote of 407-23.

Orly Wolf is a sophomore at Orange High School in Pepper Pike, Ohio. She is a Staff Writer for Fresh Ink for Teens.