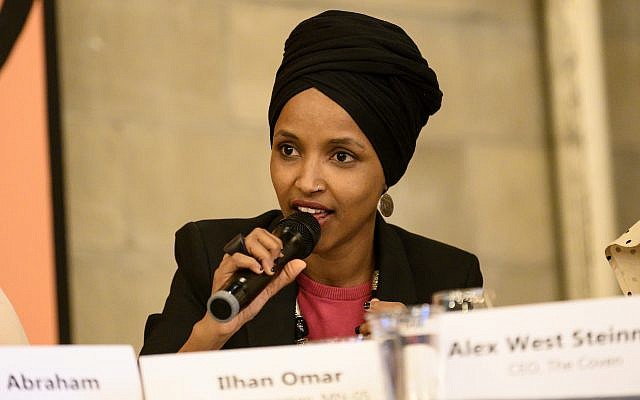 On Thursday, the Minnesota Democrat’s spokesman, Jeremy Slevin, confirmed to the Jewish Telegraphic Agency that she is planning to join the group.

On Monday, three black and two Jewish members of the U.S. House of Representatives from both parties launched the caucus.

The caucus, launched after a meeting convened by the American Jewish Committee in January, will work to bring blacks and Jews together to back hate crimes legislation and combat white supremacist ideology and actions.

The Jewish Republican has called the Muslim Democrat anti-Semitic. She has retweeted others who called Zeldin Islamophobic. In a tweet about the black-Jewish caucus, she wrote of “Zeldin’s bigotry.” Zeldin in turn accused Omar  of trying to “poison” the new coalition.

In February, Omar drew wide condemnation for a tweet in which she seemed to say that U.S. support for Israel had to do with donations from the pro-Israel lobby. Many said the tweet drew on anti-Semitic tropes about Jewish influence and money. Previously, she drew criticism for a 2012 tweet, in which she said that Israel had “hypnotized” the world.

The American Jewish Committee said it hoped being part of the caucus “will sensitize Rep. Omar to the importance, history and achievements of Black-Jewish relations in our country.”

“That would be the best possible outcome,” said Kenneth Bandler, the group’s director of media relations in an email to JTA.

Not to be done, Omar tweeted that “my hope here is that Zeldin can learn and grow.”