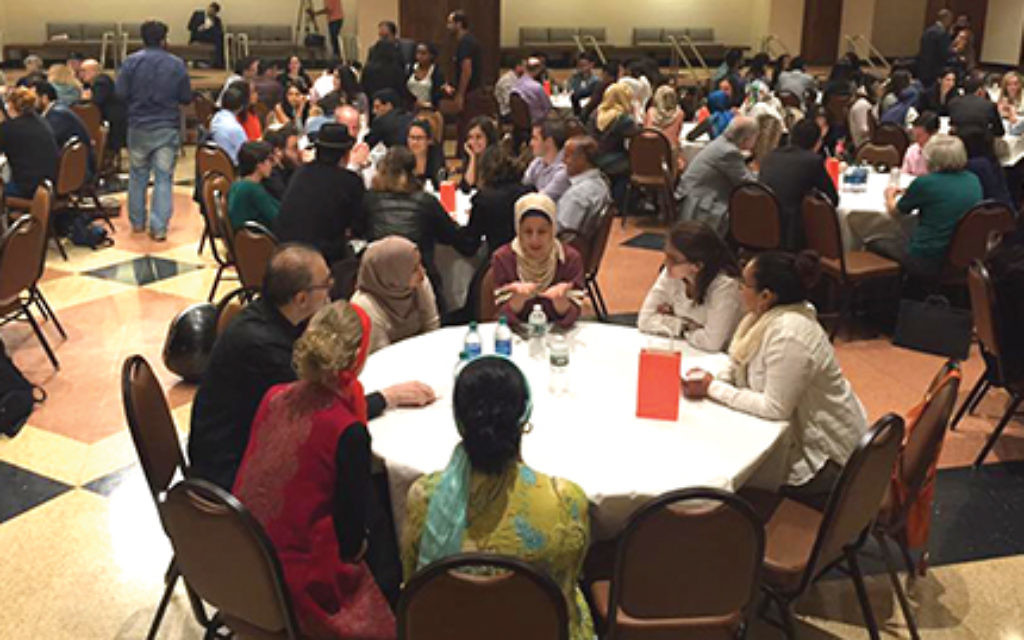 In the midst of an election season rife with divisive political rhetoric, 200 Jews and Muslims gathered to break bread, break the Ramadan fast and break with a mainstream narrative that often pits one religion against another.

Temple Emanu-El hosted an iftar, the evening meal eaten by Muslims at sunset to break the daily fast during the holy month of Ramadan.

“I remember feeling at last year’s iftar that this work of building bridges between our communities was important,” said Rabbi Allison Tick Brill, an assistant rabbi at Temple Emanu-El, in her opening remarks at the event. “And yet this year, it feels even more pressing.”

The event, which was held June 23 at the Upper East Side synagogue, was the second annual iftar organized by the NYC Muslim Jewish Solidarity Committee (MJSC); the group was launched two years ago by the Foundation For Ethnic Understanding and was officially registered as a nonprofit this year.

Although the event officially began at 7 p.m., the Ramadan fast lasts from sunrise to sunset, which was not until around 8:30. This gave attendees an opportunity to listen to speakers of both Muslim and Jewish faiths who shared stories of acceptance and spoke to the importance of tolerance.

As the speeches went on, attendees in the grand ballroom on the lower level of the city’s first Reform synagogue, remained respectfully silent. In between the speeches, however, that tranquil audience transformed into a loquacious one, as friendly chatter and intense dialogue filled the room. Attendees’ dress, which ranged from casual to formal, was primarily secular clothing, with a few hijabs and kipas sprinkled in.

During these breaks, attendees bonded over things they shared: similarities of their religious traditions, dismay at the current political climate and the intricacies of living in New York City. The discussions covered topics ranging from the differences between halal and kosher practices to the complexities of the subway system.

Following a traditional Muslim prayer, chanted in Arabic, that officially broke the Ramadan fast, attendees filled their plates with catered food, either from the halal tables, where the offerings included hummus, salad, pita and stew, or from the kosher tables, where the fare centered around deli sandwiches.

“Our ultimate goal is about the connection and friendships between individuals,” Michelle Koch, MJSC’s director of operations, told The Jewish Week as the dinner was wrapping up. “It is a big deal. People who aren’t likely to meet sometimes connect at our event and end up becoming great friends.”

The iftar is one of several events hosted by the MJSC in the past year that celebrated one religion’s holiday in another religion’s house of worship. Two months ago, the group hosted a Passover seder at the Islamic Society of Mid-Manhattan. And in December, the organization invited the New York Jewish and Muslim communities to celebrate Chanukah in a mosque. These events, like last week’s iftar, aim to build connections and debunk myths and stereotypes.

“I never had real conversations with Muslim people before [I got involved],” said Zena Rose, who serves on the organization’s four-person board along with Koch. Rose, who grew up in a Conservative family in New York, found that her involvement in the organization gave her an outlet to “connect with her Judaism” and “live out the Jewish values that are important to her.”

This event was especially geared towards welcoming refugees and immigrants to New York City. The evening included refugees from several Middle Eastern and North African countries.

“It is really important to support these refugee communities,” said Rabbi Trick Brill. “People who are coming to our country as refugees are coming for the same reasons Jewish families came to New York a generation or two ago.”