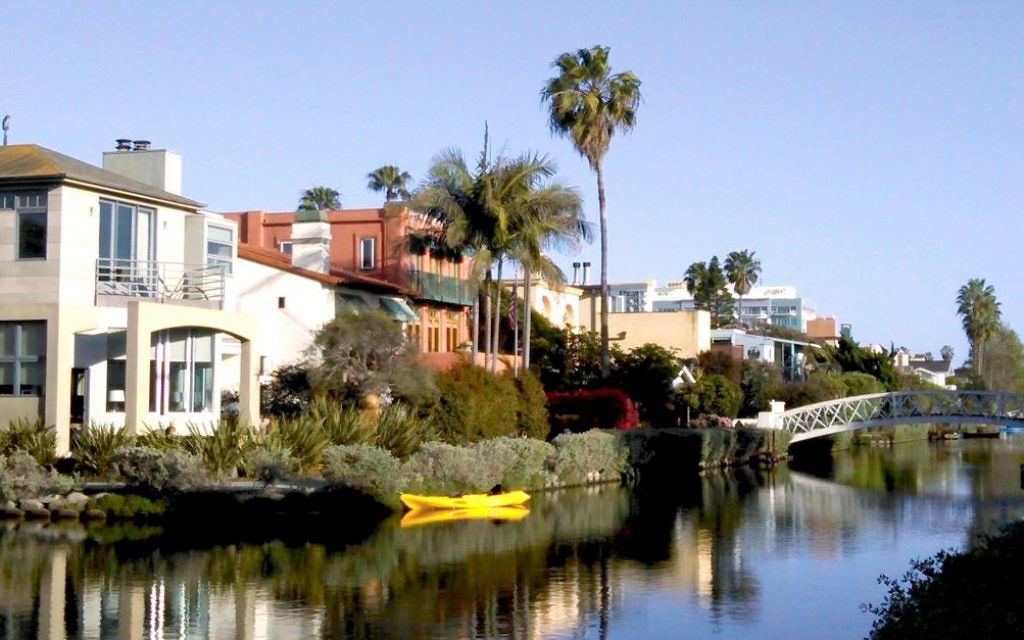 About 15 years ago, on my way to a meeting in Los Angeles, I received word that it had been cancelled. My flight left early the next morning — but I suddenly had an entire evening at my disposal, on a coast with spectacular sunsets.

So I turned my rental car west toward Santa Monica. I parked on a block of 1920s bungalows and towering palms, bought an ice cream cone, and spent several blissful hours strolling along the cliff-top park overlooking Santa Monica beach, the famous pier, the mountains of Malibu — and that exquisite, incomparable Pacific sunset.

While L.A. is a popular place for vacations, it’s also a place where we sometimes find ourselves with just a little time to kill; we’re on business, visiting relatives or en route elsewhere. Fortunately, America’s Left Coast Jewish hub is a smorgasbord of memorable experiences that can easily be snuck into an itinerary. So the next time you find yourself with a free couple of hours, consider the following diversions:

1. The view from the Sunset Strip, West Hollywood. Past L.A.’s trendiest neighborhood, whose shabby trattorias and Russian delis are cheek by jowl with fashionable nightclubs and new boutiques, the jaw-dropping view over L.A. from the Mondrian Hotel remains indelible. Some are bemoaning the gentrification of the seedy old Sunset Strip, but there’s no turning back progress — and as long as the poshification is here to stay, you might as well enjoy the view. The Mondrian’s super-exclusive Skybar — with cocktails by the rooftop pool — offers one of the most beautiful sights of L.A.

2. Catch some Jewish theater. OK, this is not something you can do with a free morning, but the variety of Jewish cultural life in L.A. is truly outstanding — and on any given week, you can likely fill an evening with Jewish performance. You might luck into a show from Theatre Dybbuk, a progressive ensemble that premieres new works, or the Jewish Women’s Repertory Company, which performs theater that is entirely by and for women.

3. Eating kosher Persian on Westwood Boulevard, a little slice of Tehran in L.A. The Iranian community has enclaves throughout greater L.A., but the small-scale storefronts along Westwood Boulevard, the main thoroughfare of UCLA’s neighborhood, remain its Jewish heart. In addition to numerous Persian eateries – some kosher, some not; some elegant, others casual cafés and tea shops – you’ll stroll by shops selling Iranian movies, Judaica, and books in Farsi, along with the obligatory fro-yo. It’s a tight-knit community, and spending time here is a way to experience L.A. at its most local.

4. Jewish life, al fresco. For this one, you have to scan the Internet to see what’s happening on any particular week. Blessed with a climate that’s sunny, dry and warm (getting warmer) year-round, L.A. Jewish groups frequently celebrate outdoors — everything from Shabbat on the beach (more popular in summer) to plein-air holiday carnivals and cultural festivals that exploit the beauty of local surroundings. For East Coasters used to worshipping indoors, this can be a really unforgettable experience. At some shuls — like the historic Pacific Jewish Center, on the Venice boardwalk — Shabbat is always on the beach.

5. Speaking of Venice: Hit the canals. The counterculture boardwalk is legendary, but many people don’t realize that our Venice has at least one thing in common with Italy’s — a network of picturesque, romantic canals. Tucked into a posh, low-scale bungalow neighborhood near the beach, these canals are just wide enough to be crossed by footbridge or navigated by tiny rowboats — no gondolas here. Nearly every house in this neighborhood is an architectural gem that features airy Californian décor and lush landscaping on full display to all who stroll by. Best of all, these canals are a peaceful, traffic-free escape from the urban bustle.

They’re also home — literally — to one of L.A.’s newest congregations, the Open Temple, a pluralistic and post-denominational group that hosts everything from Sukkot on the canals and Jewish yoga to Venice Shabbat Crawls on nearby Abbot Kinney.

6. Wander over to Culver City — and check out some of Tinseltown’s late Jewish legends. If you haven’t been to this modest West Side area in awhile, you may be surprised at how much funky youthful energy there is in this revitalized hipster ’hood. The walkable center combines historic buildings with outdoor cafés, and most of the people walking around are 20- and 30-something professionals.

Then there are the people no longer walking around – the dozens of deceased Jewish performers, entertainers and Hollywood machers buried at Hillside Jewish Cemetery, whose lavish celebrity graves have drawn star-seekers for decades. The centerpiece here is Al Jolson’s 75-foot-high domed monument overlooking a cascading hillside water fountain, but Shelley Winters, Leonard Nimoy, and Hank Greenberg are among the notable neighbors.