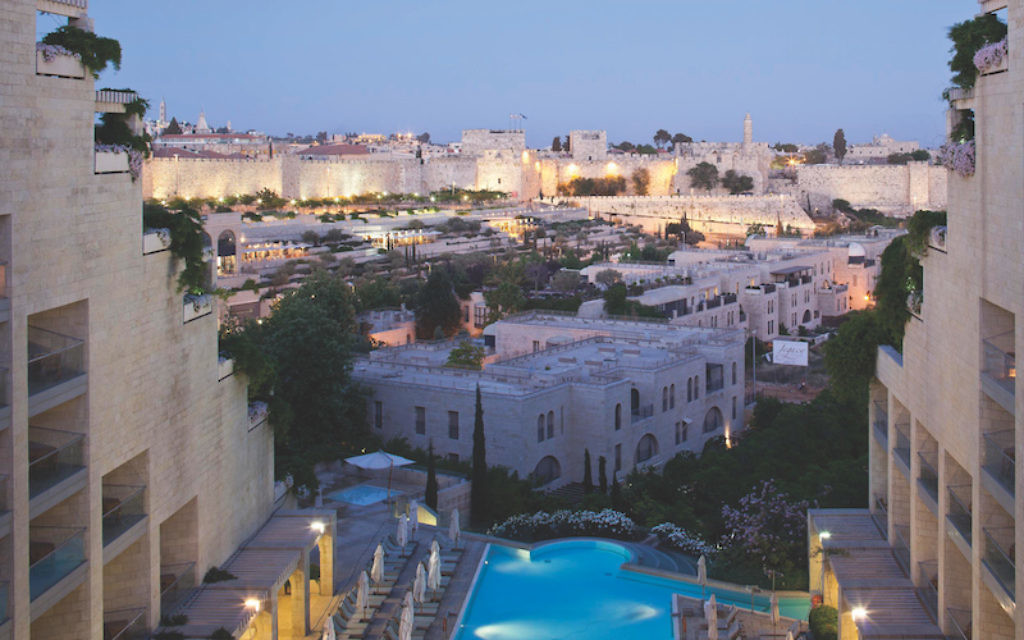 Despite the prolonged downturn in foreign tourism from the U.S. as a result of the Gaza war in 2014, as well as the sporadic terror attacks in Jerusalem and Tel Aviv in the past year, Israeli hoteliers are sensing an uptick.

Hoping that tourists from the U.S. will eventually return, as they always have after waves of violence over the years (the 68 percent hotel occupancy rate in July was just 3 percentage points below 2013 levels, according to the Central Bureau of Statistics), hotel owners are not only building new and unusual facilities, but they are also investing heavily in renovating existing properties and marketing them as “new.”

In the northern Israeli town of Zichron Yaakov, which was founded by Baron Edmond James de Rothschild in 1882, the Elma Arts Complex Luxury Hotel is perched on a cliff overlooking the Mediterranean. This unusual structure, which originally served as a sanitarium for Histadrut workers nearly 50 years ago, was purchased by philanthropist Lily Elstein in 2005. Elstein, an avid art collector, envisioned transforming the unique but derelict structure into a high-end art gallery and concert hall. After starts and stops regarding how the structure, originally designed by iconic Israeli architect Jacob Rechter, would be transformed, Elstein decided to create an arts and music complex, anchored by a luxury boutique hotel.

“The whole hotel was gutted and remodeled from top to bottom with the main building complex featuring an art gallery, a 450-seat concert hall designed by world-renowned Arup/Artec Consultants of New York, who also designed the acoustics in Lincoln Center,” said Bruno de Schuyter, Elma’s general manager. The hotel is spread over 30 acres, has 95 large rooms and features 500 pieces of art on display, including a Picasso, de Schuyter said. “There is nothing remotely like this in the Israeli hotel industry.” He also stressed the variety of culinary options in the hotel’s “chef” restaurants.

In its year of operation, de Schuyter said “upscale” tourists from the U.S. and U.K. have remarked about the hotel’s “inner beauty and outdoor surroundings.” He said, “It’s almost like residing in a museum.”

In Tel Aviv, the Fattal Hotel chain is beginning to focus on building hotels that resonate “urban chic” and an upscale lifestyle. Earlier this year, the chain unveiled NYX (pronounced “nix”), a hotel named after the Greek goddess of the night.

The hotel, which is located in the heart of the city, not only offers luxury rooms, but is predicated on offering 24/7 funky fun and other perks such as a barber shop, tattoo artist, all-day DJ, rooftop flicks and eclectic vending machines. “NYX is aimed at a younger, trendy crowd, which looks to enjoy a true upscale designed hotel with unique experiences both indoors and around the city,” said Roni Aloni, Fattal’s vice president of marketing and sales. We will continue to develop hotels like NYX because that’s the trend in most cosmopolitan cities — places where you can do business by day and party all night.”

At the other end of Tel Aviv, along the bustling beachfront, Fattal offers a chic “time tunnel” experience at its Herod’s Tel Aviv facility. The former Leonardo Hotel was remodeled and transformed into “concept hotel” reflecting the grandeur of 1930s Tel Aviv. Guests can walk down an old-style, tree-lined boulevard that leads directly to the beach. “We are developing more hotels in metro Tel Aviv that will cater to different types of audiences,” Aloni added. That’s the challenge to keep attracting more foreign tourists.”

In Jerusalem, Adi Nevo, the general manager of the venerable David Citadel Hotel, maintained that after a two-year effort to remodel all of the hotel’s 385 rooms in tandem with Italian designer Piero Lissoni, he considers the luxury property to be “a new hotel, from top to bottom.”

Nevo added, “We are putting the finishing touches on the remodeled banquet facilities and public areas as well. By Passover, the hotel will be completely renovated. We have also added a unique chef, who specializes in making fabulous traditional Old World European dishes, such as kugel, gefilte fish and other delicacies, which are making a comeback at Israeli restaurants as well.”

The Citadel and its sister luxury facility, Mamilla Hotel, are part of the striking Mamilla complex, which also includes the Mamilla Mall. “The entire complex is essential to Jerusalem’s tourism and culture, as well as a gateway to the Old City’s historical and religious aspects,” said Nevo.

Several other upscale hotels are in the final stages of construction and set for 2017 openings, including The W hotel and residential complex in Jaffa (it is being built on the site of a former 19th-century French hospital by New York real estate mogul Abby Rosen), and the Isrotel chain’s Orient Hotel and residential compound, which is located at the entrance to Jerusalem’s trendy German Colony neighborhood.

Personalizing Your Tourist Experience In Israel

Many foreign tourists and business travelers enjoy exploring Israel through the eyes of English-speaking Israelis who know the country inside-out.

ToursByLocals, a Vancouver, Canada-based company formed eight years ago, has created nearly a half-million personalized tourist experiences across the globe. The company is comprised of tour professionals — in Israel and 146 other countries — who are committed to changing the relationship between travelers and local tour guides who deliver travel services.
ToursByLocals recruits insightful, reliable local tour guides everywhere foreign tourists travel. These guides offer travelers private tour experiences that aim to educate and inspire further exploration. The company offers experienced guides in over 1,000 destinations, with tours available across Israel, from Jerusalem and Tel Aviv to Nazareth, the Galilee, the Dead Sea and Masada, etc.

Each ToursByLocals tour is private — just the traveler, their companion(s) and the guide. The guides highlight an array of specialties, including Jewish heritage tours, culinary experiences, beach excursions, walking tours and architectural exploration. The itinerary is customized according to the tourists’ interests and schedules.

The company lists all guides on its website, toursbylocals.com. Travelers can search for a guide by destination, read about a guide’s qualifications and areas of specialization, read reviews of guides and check tour prices. They can then choose the person they wish to hire and contact that guide directly to arrange a customized tour (or choose one of their existing tours).