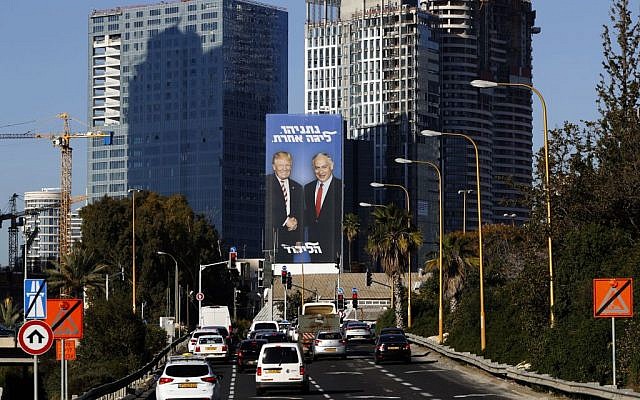 A picture taken on February 3, 2019 in the Israeli coastal city of Tel Aviv shows a giant election billboard of Israeli Prime Minister Benjamin Netanyahu and US President Donald Trump shaking hands. The writing on the billboard reads in Hebrew "Netanyahu, in another league". Getty Images

Last Thursday, days before the upcoming Israeli elections, over 700 eligible Israeli-Americans gathered in the Israeli Consulate to cast their absentee ballots — though for Yuval, the hyphenated construct didn’t go over well. “What’s an ‘Israeli-American’?” he cut me off with the typically Israeli tisk, shoulder-tap interjection, “I’m an Israeli.”

His friend Yossi intervened. “What do you mean, ‘what’s an Israeli-American’?” he said, subtly nudging my arm. “We are!”

Both Yuval, 24, and Yossi, 26, are security workers for El Al. They’ve both been living here for over a year, and while they have hopes to extend their visas, both believe they will ultimately return to Israel. While Yossi is comfortable describing himself as Israeli-American,  Yuval is adamantly not. “It doesn’t matter where I live.I’m an Israeli and that’s it,” he argued.

According to Israeli law, only civil servants and their spouses representing Israel abroad — Israeli citizens working in the United Nations and for the ministries of defense, tourism and the economic mission, as well as emissaries of the Jewish Agency, KKL-JNF, Keren Hayesod, the World Zionist Organization and El Al’s security personnel — are eligible to cast absentee votes. (Other Israeli-Americans have to return to Israel to vote.) This makes the Israeli elections, one of the most hotly debated topics in private circles, a muted one among Israeli-American organizations. The national umbrella organization Israeli American Council (IAC), Israeli-Americans’ semi-official spokesgroup and primary engine of cultural programming, avoids openly weighing into either Israeli or American politics, and has produced no related election events. There has been no notable mobilization of Israeli-Americans for either side of the political map in Israel. In terms of Israeli-American identity, the elections in Israel are less about left vs. right than Israeli vs. American.

Kobi Cohen, who moved to New York eight years ago with his wife and two sons, sees the Israeli elections as a marker of his unshakable connection to Israel. As in the last election, this week he will fly back to Israel specifically to vote. “I see myself as an Israeli who lives here now but one day plans to go back, and I care deeply about what’s happening in the country. … I see [voting] as my civil duty.”

Even though he is geographically removed from Israel, Cohen added, as Israeli-Americans he and his family are directly affected by the Israeli elections. “My 13-year-old son asked me why I keep drilling him about what’s going on in Israel;why does he need to know. I told him that, as someone who is associated with Israel, people will treat him automatically as either friend or foe, and that he will have to answer for Israel’s actions.” Cohen is a former regional director for IAC Mishelanu, a program for Israeli-Americans on campus; he’s currently a director of program operations at the Jewish Agency’s Council for Hebrew Language & Culture.

One of Israeli-Americans’ more notable “get out the vote” campaigns in the run-up to the April 9 elections was the short, satirical video produced by the group Connect IL, a community of New York-based, liberal-leaning Israeli-Americans. According to Miki Golod, one of the group’s co-founders, since March 9 the video — a spoof about the differences between living in New York and Tel Aviv — has received more than 190,000 views, drawing media attention in Israel. Golod, who moved here eight years ago to pursue a master’s degree at the Fashion Institute of Technology, has met and married his American boyfriend here. While the couple remains based in New York for now, “I would like to know that one day I could go back home and the State of Israel would recognize my marriage, would allow me to adopt children and would accept me and my partner with open arms.”

Back at the consulate, a long but surprisingly organized line was forming in front of the ballot boxes. Political views were exchanged with a decidedly non-Israeli calm. “This was the first time I voted outside of Israel, and I was touched. … At the risk of sounding like a cliche, I was touched to see the Israeli democracy at work,” Israel’s consul general here, Dani Dayan, said in a phone interview the day after.

“What I loved about the day was the festive atmosphere it had to it,” Almog Elijis, the consul’s spokesperson, wrote in an email. “Personally I was very excited, and you could feel the excitement all around. … It felt like we are one big family.”

Inevitably, someone tried to cut in line. “I have a flight to catch right now, but I would really like to vote first,” she begged the woman in front, who immediately let her through. “Are you sure you are Israeli?” I inquired of the good samaritan.

“That was the compassion of an Israeli — not American politeness,” she replied. “Here, everything goes by the rules, but for us, it comes from the heart.”