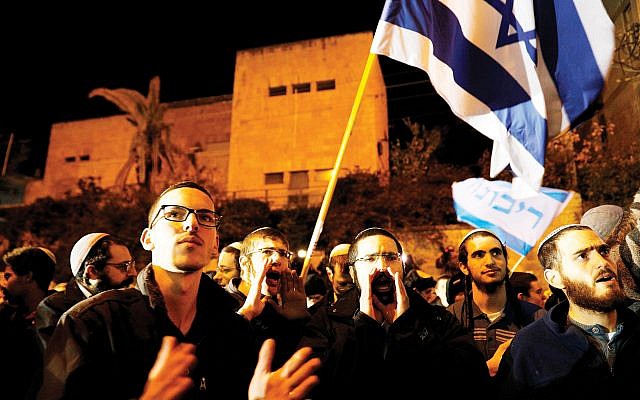 Ramping up protests: Hundreds of young Israelis, mostly from West Bank communities, gathered outside the residence of Prime Minister Netanyahu on Dec. 13 in wake of renewed terror attacks. They demanded security and tougher penalties for terror. Getty Images

Three days later was also when the cell struck again, this time at Givat Assaf Junction. Terrorists murdered two Israeli soldiers and seriously wounded a third as well as a civilian. There were other attacks during the week.

The night of Dec. 13, 1,500 teenagers from the West Bank converged on the Prime Minister’s residence in central Jerusalem to demand tighter security, tougher penalties against terrorists and annexation of the West Bank.

Some in the crowd, comprised mostly of National Religious teens ages 15 to 18, waved Israeli flags and signs demanding government action. A group of boys danced in a circle, shoulder to shoulder.

Liron Dimri, 17, said she came to the rally because her friend Shira Sabag was badly wounded in the Givat Assaf attack.

“Living with terrorism isn’t a normal way of life,” Dimri said as a group of her friends nodded. “I’m afraid to travel on a bus. I want the government to wake up and do what we’re asking it to do, not what the Palestinians want it to do.” 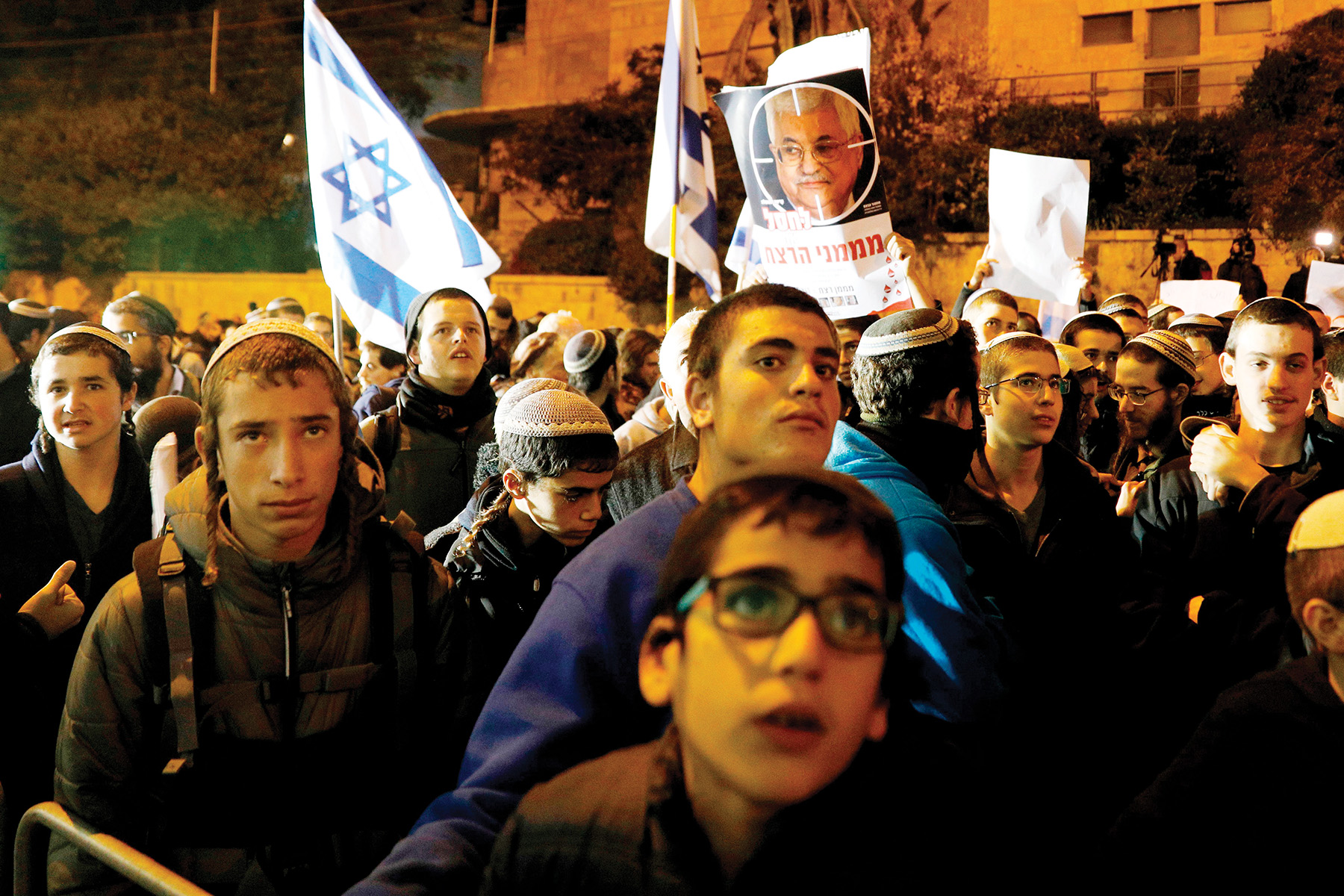 Pressure on Bibi: Protesters in Jerusalem, some calling on the prime minister to resign, feel his limited response to Gaza rockets have emboldened terrorists. GEtty Images

Residents of West Bank settlements have ramped up their activism in recent days, frustrated by what they view as inaction by Prime Minister Netanyahu, who assumed the defense portfolio when Avigdor Lieberman resigned over the government’s tepid response to the recent Gaza escalation. On Sunday, nine government ministers, including four from Netanyahu’s own Likud Party, joined settlers and their supporters in a demonstration highly critical of the government.

Knesset member and Education Minister Naftali Bennett, a West Bank resident, told the demonstrators that the security establishment “has chosen the rights of Palestinians over the security of Israelis.”

Some of the protesters called on Netanyahu to resign.

Yigal Dilmoni, CEO of the Yesha Council of Jewish Settlements, said settlers have been politically active for decades, but acknowledged that having a right-wing government in power allowed them to lower their public profile.

“Before this latest government was elected three years ago, Ehud Barak, Yair Lapid and Tzippi Livni had influence,” Dimoni said of the three centrist politicians. “Now we have a right-wing government that supports our communities, so we haven’t had to be as publicly active.”

Which is not to say that the settler movement hasn’t been working behind the scenes.

“You don’t read it in the newspaper, but we’ve been working with the government to bring more people to Judea and Samaria, to build more homes, more roads, more factories,” Dimoni said, using the biblical names of the West Bank.

Yesha has become much more active during the past month, he noted.

“In the past two-to-three weeks we have seen an escalation in terror that started in Gaza. We saw how the government limited its response to the rockets coming in from Gaza, a policy that made Hamas feel stronger instead of weaker. When Hamas thinks Israel is weak it attacks. When it fears Israel it doesn’t attack,” he said.

Hamas felt so emboldened following the rocket attack, Dimoni said, it decided to step up its terror activity in the West Bank.

“They’re attacking our civilians, our soldiers. They are daring us,” he asserted. “We feel we have to speak up in a public way. We cannot sit in our homes when attacks are taking place. We want the government to handle this issue.”

Yesha and the political right are demanding two things from the government, Dimoni said: The first is to build more settlements and add homes to existing settlements.

“They think that if they kill us we’ll go away. We must show that terror attacks only deepen our roots.”

The right is also demanding that the government do much more to deter terrorism, by making it impossible for the Palestinian Authority to reward terrorists’ families with money, and by destroying their homes.

Dimoni emphasized that despite its criticism of the government, Yesha isn’t seeking new elections.

Brian Reeves, external relations director at Peace Now, said his left-wing organization has noticed an uptick in settler and right-wing activism since the latest spate of terror attacks.

“They have been exploiting them to push forward legislation that would cross red lines. They are trying to find a way to legalize all 66 illegal outposts. You also see people building more outposts,” Reeves said, referring to the seven new outposts and the rebuilding of Amona, which the army demolished last year.

Reeves said that after Donald Trump was elected president, settlers have felt more comfortable trying to annex the West Bank, something that would allow the government to apply Israeli civil law. Although Israeli settlers have the same rights as Israelis living elsewhere, they live under the direct authority of the Civil Administration, which decides whether to approve new home construction in the West Bank.

At Thursday night’s rally, 15-year-old Yoav Nissenbaum, from the settlement of Adam, said he had come to protest the death of the attacks that had shaken his community.

“People don’t realize that we are the ones who are protecting the country. If we weren’t living on the front line, it would be right here,” he said of central Jerusalem.

Asked whether he had a message for the American people, Nissenbaum said, “We want to ask them to be with us, the way we are with them.”