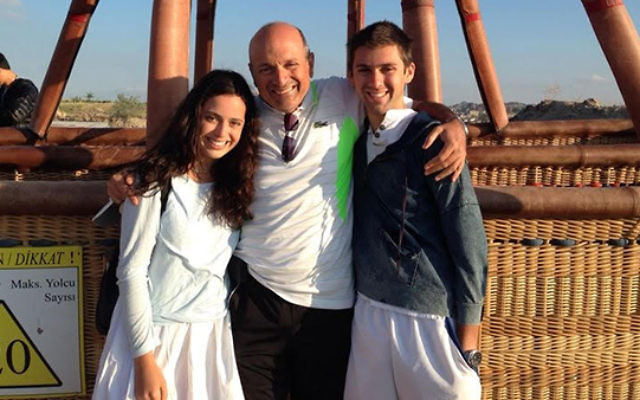 The author volunteered last summer with the Jewish community of Istanbul. She's photographed in Turkey with her father, Joseph Bildrici, in center and brother Gabriel, on right. Courtesy of Esther Bildrici

I walked inside and I laughed out of sheer apprehension. Selçuk asked me my name, in Turkish of course, but I had absolutely no idea what he was saying. I listened as the rest of my classmates stated their names, and again, another giggle burst out. Esther! Stop it already, I silently begged myself. I was not expecting classmates with names such as Yulia and Timur Timur whose homes ranged from Kazakhstan to Croatia to Afghanistan and the United Kingdom. I settled down as I remembered why I was in this situation: I was here in Istanbul to learn the Turkish language.

I knew a few words, such as when my father was furious with me and shouted Turkish profanity. Then again, those words were not exactly representative of the language. I was anxious to learn because I was in Turkey for a special purpose. And that purpose required me to connect with the Turkish culture and people, and to do this, I needed to know how to speak their language.

Last summer I came to Turkey to support the Jewish community in Istanbul, the same community that my father grew up in and felt deeply indebted to. To him, Turkey was more than just his country of birth. It was his first everything — where his first word was spoken, where he learned to ride a bike and first swam in the sea. Turkey was home, despite the occasional hostility it sprang around him. His Turkish upbringing was the reason for his quirks, like the way he drank ayran for breakfast or enjoyed his afternoon simit or sesame bread. (Photo: Esther Bildrici and her brother Gabriel overlook the majestic views of Cappadocia. Courtesy of Esther Bildrici)

The religious leaders of his community, who my dad grew up with, were seeking teenagers who could inspire the Jewish children of Istanbul. I wanted to explore my culture heritage so I volunteered in spite of the anti-government demonstrations happening only blocks away from my future school. I wanted to connect the children with Judaism and make them proud of who they are. Their knowledge of Judaism was embarrassingly limited to the existence of God and fact that Saturday was a day of rest.

Although I was learning Turkish in an attempt to better connect with my students, I was still worried they would walk in straight from summer camp with overactive minds and an inability to take an American teenager seriously. I was wrong. They ran inside, hair drenched and salty from swimming, and sat down right in front of me, smiles bright and eyes wide. On our first day, they attempted their best English and with kind eyes asked me my name. I remembered my first Turkish lesson when Selçuk, my teacher, taught me how to say, “Benım adım Ester’’ (My name is Esther).

I woke early every morning, hoping to make the boat leaving from our small island, called Buyukada, where I lived in my grandmother’s home with my family. After rough waters, and a 45-minute ride, we reached the city of Istanbul. Then I took a train to the bustling neighborhood of Taksim, where I attended a university program to learn the Turkish language. The class was open to anyone from around the world. That meant I was sharing a desk with a woman from Afghanistan and a man from Ukraine. After class, I would go back to Buyukada or to a neighboring island, Burgazada. At those islands, I would go to the local synagogue where an after-camp program took place. The program was sponsored by the Jewish community leaders.

My knowledge of Turkish progressed through the summer and so did the comfort level of my students. We built a connection, tied by the biblical texts that defined our shared history, ideals and values. I was proud to see the students find an interest and passion for the material I was teaching, but more important, I was thrilled to see them developing a genuine relationship with their heritage. I had accomplished my goal, but I gained something unexpected as well.

This trip provided me with a clearer picture of my own identity, which unbeknownst to me was incomplete. America is my home. I know the language, culture and the history. Being able to connect with the Turkish children made me realize I can belong in more than one place, and each of these places hold equal weight in defining my identity. To me, Turkey now feels like home, comfortable and warm. When my dad makes his strange Turkish delicacies topped with milk, salt and rosewater, I offer to taste it; before this trip, his concoctions sounded repulsive to me! When he talks about Turkish politics, I find a genuine interest and care because Turkey is no longer a country in the East, rather it’s my country, my family, my home. Now when my dad turns up “Kuzu Kuzu,” everyone’s favorite Turkish song, I get up and dance with him.