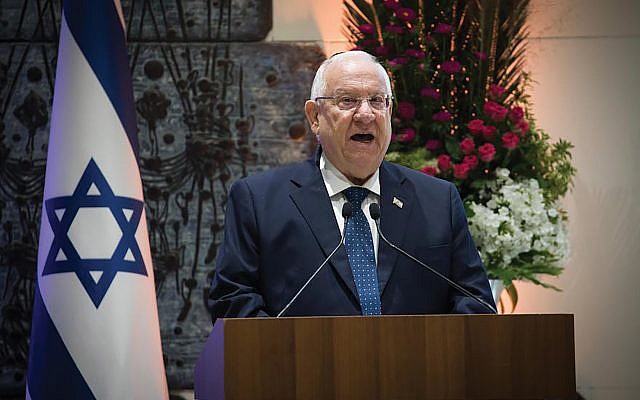 Editor’s Note: The following remarks were delivered by Rabbi Sharon Brous, spiritual leader of Ikar, a congregation in Los Angeles, at an initiative of Israel’s President Reuven Rivlin, “Our Common Destiny,” which brought together Israeli and American scholars for dialogue last week in Jerusalem. Rivlin’s remarks about the “Our Common Destiny” document can be read here.

It is an honor to be here today among colleagues, friends and teachers, and with you, President Rivlin.

I am a rabbi in Los Angeles. I am fortunate to be able to come to Israel a few times each year, and every time I step off the plane, I am still moved to tears. I think of the miraculous birth of the state, the ingathering of the exiles, the countless acts of heroism, the revitalization of Hebrew as a language and culture, the stunning achievements in art, science, medicine and technology. I realize that my great grandparents, and their parents, and theirs could only have dreamed of walking the streets of Jerusalem and breathing its air.

And even as I hold a profound awareness of the miraculous and the remarkable, I must be honest that my heart is heavy when I think of the Jewish State and the Jewish people today, as I see the growing rifts between religious and secular, right and left, Israeli Jews and diaspora Jews that threaten to tear our people apart.

I see Israel struggling to determine if it will remain a striving democracy, while actively undermining democratic norms daily.

I am pained to see Israel — a state built not only as a refuge, but also as a public manifestation of Jewish values — aligning with extremist, nationalist and even anti-Semitic regimes abroad.

My heart aches as I see the decoupling of Torah and compassion, decency, love and justice. Too often those who call themselves “religious” use our Holy texts to justify hatred, insularity and sometimes violence.

I see a growing hardening of the heart toward the Palestinian people, the asylum seekers and the foreign workers. I see the enactment of harsh policies that undermine not only our democratic commitments but also our Jewish values.

I see a rift between those who believe we are a nation alone in the raging sea, understood by no one, suspicious of everyone — and those who believe that we’re part of a precious and fragile web of humanity, linked by both shared interests and a common destiny.

I see a widening gap between Yerushalayim shel malah — the Israel of our dreams, a society based on freedom, justice and peace as envisaged by the prophets of Israel — and Yerushalayim shel matah — the real Israel, a society of great promise, but one that is increasingly segregated by race, class, and ideology.

‘I see a reality [in Israel] that is increasingly alien and alienating for my American Jewish community back home.’

I see a reality that is increasingly alien and alienating for my American Jewish community back home, which affirms at its core Torah values of love, justice and the ceaseless striving for peace — for our own people and for all people.

Our Jewish community knows well the external threats we face. As an American Jew, I can tell you that the past three years have felt like no other time in my life, as the rise in white nationalism has led to synagogue shootings, anti-Semitic vandalism, death threats and competing allegations of dual loyalty and disloyalty from the highest offices.

But we have, until now, failed to adequately address our internal struggles, which matter just as profoundly. The challenges facing the Jewish people are not superficial; they are foundational, and we must reckon with them honestly and openly.

That’s why I joined this gathering this week, to sit with Jewish scholars from Israel and around the world to attempt to articulate a new vision for the Jewish people. We need more than ever to hear one another despite our differences, to work together to determine what our shared Jewish inheritance demands of us.

In the midst of global economic, environmental, political and social tumult, our Jewish people needs to determine who we are and who we aspire to be. I pray that we’re able to collectively affirm a path that aligns with our aspirations and obligations as descendants of enslaved people in Egypt — striving to manifest the divine image in all of God’s children.

We are grateful to be able to do this work with you, President Rivlin, as you have courageously insisted that the moral character of the Jewish State and the Jewish people is essential to our survival.

We have many disagreements, but we are here as family bound by a shared history and shared destiny. As Rabbi Tarfon said: “The hour is late and the task is great” (Pirkei Avot 2:15). I pray that together we build a future that honors where we have been, what we have received, and where together we must go.