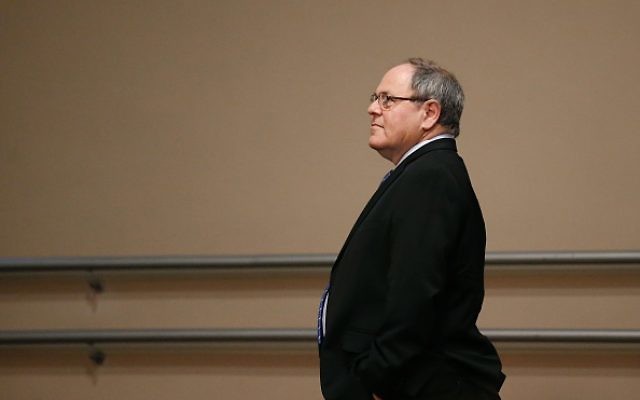 Amb. Danny Dayan walked out of a Bezalel fundraiser in NYC in protest of their criticism of Israel.

My first meeting with Israel’s new consul general in New York, Dani Dayan, didn’t get off to a great start.

At the outset of an interview the other day at his office, Dayan, widely admired for his charm, smarts and ability to make his case, didn’t waste any time in telling me that an editorial I wrote five months ago about his appointment was wrong about him, Israeli Prime Minister Netanyahu and in its premise.

The editorial in question, “Forget Brazil, Hello New York” (April 1) asserted that Netanyahu “sought to resolve one political conflict by creating another — ending a standoff with the government of Brazil over his 2015 appointment of … Dayan to serve as ambassador by reassigning the former leader of the settler movement to the post of consul general in New York.”

Dayan, 60, was born in Argentina and went on to become a successful businessman in Israel and leader of the settler movement. The move to have him succeed Ido Aharoni in New York “came about after Brazil’s government had refused for many months to accept Dayan’s appointment because of his affiliation with the settler movement and opposition to a two-state solution,” the editorial stated.

It went on to say that the appointment of Dayan to Israel’s biggest and arguably most important diplomatic mission, soon after another settler leader and outspoken critic of the two-state solution, Danny Danon, was named ambassador to the United Nations, created “a credibility problem for the two key diplomats” and their prime minister, who also serves as foreign minister.

Since Netanyahu and his government are on record as supporting a two-state solution, “the issue of where Israel stands on the settlements and the Palestinians is clouded rather than clarified when its foreign ambassadors appear to say one thing and believe another,” the editorial said, adding: “The latest appointment may well cause confusion, if not disappointment, among American Jews who overwhelmingly support a two-state solution.”

In a calm, polite manner, Dayan said the editorial was wrong because Netanyahu does believe in a two-state solution “in his heart and with his lips,” but one that is based on: a future Palestinian state being demilitarized; Israel being recognized as a Jewish state; and the Palestinians giving up their claim to the right of return.

“It’s theoretical,” Dayan emphasized, referring to a resolution of the Israeli-Palestinian conflict. He pointed out that there is a “consensus it’s not going to happen” in the near future. (The latest Israel Democracy Institute poll confirms that view, with only about half of Palestinians and Israeli Jews supporting a compromise plan.)

“The one steady pattern to the diplomatic part of the conflict,” he added, “is that when it comes to territorial compromise, Israel accepts and the Palestinians say no.”

He said that before his appointment to New York, he told the prime minister to “choose someone who completely identifies with your policy and your ideology,” and who can articulate it.

“Danon and I have that ability,” he told me, asserting that the choice Netanyahu made was “correct.”

(In an interview last February, Danon told me that in his professional capacity, “I represent the policy of my country — period.”)

Moving on to other topics, Dayan acknowledged that he had been “ignorant of American Jewry” and that he had prepared for the assignment by holding a number of meetings here with a wide variety of Jewish leaders in order “to hit the ground running.”

He said his biggest challenge is “to garner support” for Israel, and, based on his recent meetings, he has identified three initial priorities. The first, noting America’s changing demographics, is to strengthen ties with minorities, including African-Americans, Asians and Hispanics, with whom his fluency in Spanish should prove helpful. Polling shows those groups are less supportive of Israel than white, older Americans.

Second, Dayan said he wants to ensure that Israel “remains a bipartisan” issue in Washington, not “a wedge issue.” He will seek to “dispel” the perception many have that Netanyahu sides with the Republicans, reinforced by the prime minister’s appearance before Congress last year to denounce President Obama’s nuclear deal with Iran.

“I plan to devote a disproportionate amount of time speaking to liberals and progressives” who recognize Israel’s right to exist but are often critical of its policies, he said. While he did not name J Street, the progressive alternative to AIPAC, Dayan made clear that he hopes to engage and win over some of its youthful supporters.

That might not be so easy, given that Dayan called J Street “un-Jewish” in a recent television interview. He later said that his comment was “somewhat undiplomatic” and that his English was imprecise. He meant to say that some of the candidates J Street endorses are in conflict with Jewish values, he explained, as are some of the lobby’s positions.

“I didn’t come to speak to the choir. Every pro-Israel view that is legitimately expressed in the Knesset, from Meretz [on the left] to Bayit Yehudi [on the right], is legitimate here as well,” he told me, noting that he has participated in conferences sponsored by the New Israel Fund and Haaretz despite criticism from the right.

“I want to engage with critics whose views merit response. My message to progressives is that Israel is on solid moral ground. That is my deep belief,” he said, having noted in the past that the Palestinians “made a moral mistake” when they rejected partition in 1947. “When you make a moral mistake, you must pay for it,” he said.

“I see banners that say ‘Stop The Occupation,’ and I want to ask ‘How?’” If Israel were to withdraw unilaterally, Tel Aviv and Ben-Gurion Airport would be at risk, he asserted. And if Jerusalem were to accept all of the Palestinian demands, including the right of return, there would be no more Jewish state. “So I must conclude that the slogan on those banners is shallow, false and deceiving.”

Dayan’s third key issue is to deal with “the growing rift [between liberal American denominations and Israel] on religious pluralism,” including the right of egalitarian groups to fully participate in praying at the Western Wall. The right-leaning coalition in Jerusalem, with religious parties playing a key role, has backtracked on a compromise for prayer at the Kotel reached earlier this year, upsetting many American Jews.

Dayan said he plans to invite Conservative and Reform leaders to a “brainstorming” meeting, and will “work toward solutions that avoid confrontation.”

“But that’s not enough,” he added. “We must respect the right of every Jew.”

He acknowledged that he did not know how to resolve the problem, but said he wanted to make clear that “I will be no less an ambassador of American Jews to Jerusalem as Jerusalem’s ambassador to American Jewry.”

Dayan’s post, which officially began Aug. 1, is for three years, with a fourth year optional. He was quoted recently as saying, “I believe in my ability to bring about a revolution in public relations in North America — and New York is its beating heart.”

That heart has long had a warm spot for the Jewish state, though there are signs it is cooling of late, especially among younger people. Both friends and critics are eager to see how the new consul general’s revolutionary approach takes shape.