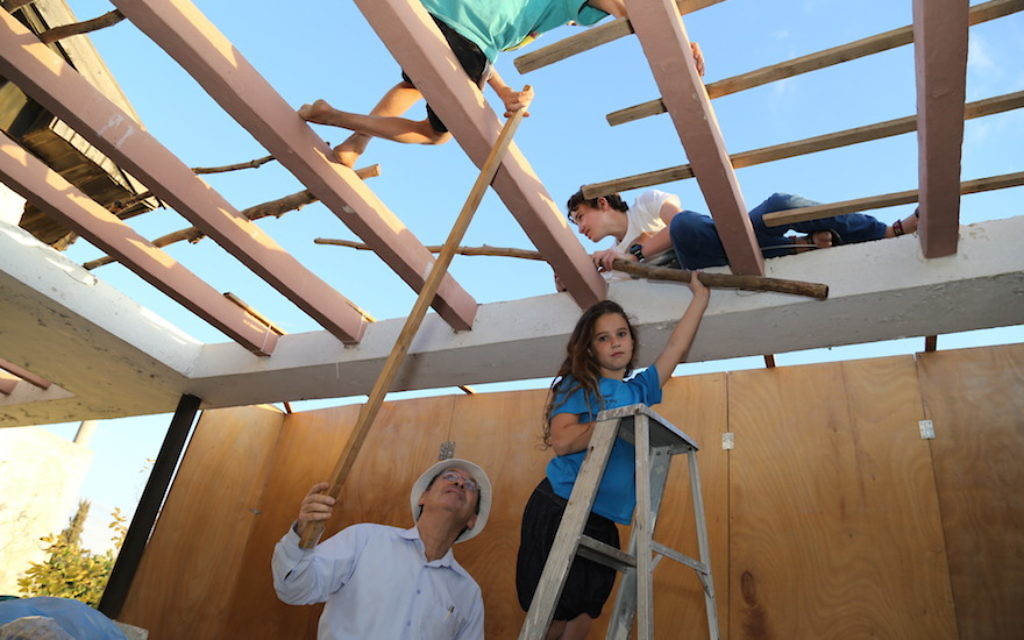 As Hurricane Joaquin gains steam off the southeastern coast of the United States, the question has begun to circulate online: Are Jews allowed to take down their sukkahs in the case of a storm?

Sukkot, which began Sunday, runs through this Sunday evening. Hurricane Joaquin, the first large tropical storm of the hurricane season (the name means “raised by God” in Hebrew), could hit parts of the East Coast this weekend — just before the end of the holiday.

Regardless of whether the Category 3 hurricane makes landfall, it is expected to bring as much as 20 inches of rain to Georgia, the Carolinas, Maryland, Delaware and New Jersey.

During the weeklong festival of Sukkot, Jews are commanded to “dwell in booths,” or sukkahs, outdoors to pay tribute to their ancestors, who lived in closer proximity to nature and agriculture. Some families and synagogues are worried that the upcoming inclement weather could destroy their sukkahs.

According to Jewish law, a sukkah should be taken down if it is going to be damaged. Once it is ruined, it is technically no longer fulfilling the requirements of the holiday anyway.

Also, if the sukkah poses a danger to those in or around it, the primacy of human life in Jewish law dictates that it must be taken down.

Rabbi Marjorie Slome of the West End Temple, a Reform congregation on Rockaway Beach, New York, added that Sukkot is a holiday meant to be enjoyed in comfort.

“It’s supposed to be the season of rejoicing, and you’re not going to be rejoicing if rain is getting into your soup,” she said.

Slome has experience juggling Judaism and tropical storms. Her synagogue was inundated with 5 feet of water during Hurricane Sandy in 2012; its damaged offices are still being reconstructed.

“I’ll pay attention to the weather and do whatever they’re telling us to do,” Slome said.

On Thursday, New York City’s Office of Emergency Management circulated an advisory warning saying that sukkahs should be dismantled if winds get to over 40 miles per hour.

“Individuals who have constructed a Succah for the holiday should take appropriate actions to secure the structure and roofing to prevent damage or injury from flying debris,” the warning read.

Dina Garfinkel, 41, of Brooklyn, New York, started a Facebook thread on Thursday about what to do with sukkahs during the storm and received varied responses. Some of her friends’ sukkahs in Chicago and Cherry Hill, New Jersey, had already been blown down by wind and rain. Some of her neighbors, including one who vaulted his sukkah to a brick wall, intend to keep theirs up through the storm.

“There are a lot of variables,” said Garfinkel, a project manager who has a background in mechanical engineering. “It depends on the size of your backyard.” She added that “a few people put tarps on top” of their sukkahs.

After thinking it through, Garfinkel decided to take down her sukkah down before the worst of the weather hit.

“After Hurricane Sandy, when the back part of our house ripped off … I just didn’t want risk it,” she said.