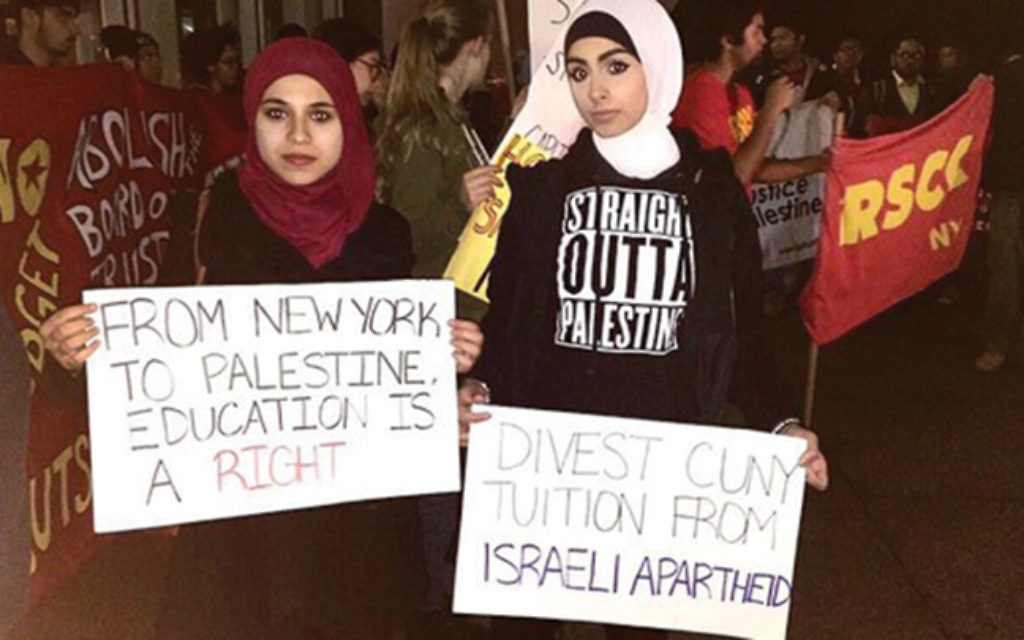 Hunter College and Jewish organizations are condemning a pro-Palestinian student group that took over a student rally for free tuition by chanting “Zionists out of CUNY” and “Long live the intifada.”

The Nov. 12 rally outside the Upper East Side school — part of a national “Million Student March,” which advocates free tuition and cancellation of student debt — drew more than a hundred students, who chanted and listened to speeches on a variety of causes (Black Lives Matter, prison reform, communist revolution) for several hours before marching to the chancellor’s home, where police ordered the crowd to disperse.

Interspersed with such chants as “no tuition, open admission,” were the anti-Israel chants. As students spoke, a large Palestinian flag waved nearby and students held such signs as “Hunter students for Justice in Palestine” and “Divest CUNY Tuition from Israeli Apartheid.” A small group of students, including one wrapped in an Israeli flag, held a counter protest with one student holding a sign that said “Pro-Israel, Pro-Affordable Tuition, SJP doesn’t Speak for Me” and another with one calling for “Lower Tuition, not Terrorism against Israel.”

The group NYC Students for Justice in Palestine explained their reasoning for piggybacking their cause onto the free-tuition movement in a Facebook post the same day: “The Zionist administration invests in Israeli companies, companies that support the Israeli occupation, hosts birthright programs and study abroad programs in occupied Palestine, and reproduces settler-colonial ideology throughout CUNY through Zionist content of education. While CUNY aims to produce the next generation of professional Zionists, SJP aims to change the university to fight for all peoples liberation.”

The post was signed by NYC Students for Justice in Palestine and the group’s chapters at Hunter College, Brooklyn College, St. Joseph’s College, the College of Staten Island, John Jay College, the CUNY School of Law, Pace University-Pleasantville, New York University and Columbia.

In response to the chants, Hunter College student @becca wrote via Twitter, “Full-blown anti-Semitism allowed at my college. What’s next @Hunter_College?! I witnessed this and froze in fear,” and linked to a video of the chanting students that the Israel-advocacy organization StandWithUs posted on Facebook.

Another student, @The_Slavinator wrote “Is @Hunter_College condoning #antisemitism? Sure seems like it. Are they content to be deemed a #HotbedOfHate?”

Hunter College quickly condemned the statements, with Chancellor James B. Milliken stating Friday that CUNY is “a place of inclusion, not exclusion.” While “free speech, debate and the open exchange of ideas” are essential, he said, “intolerant, hateful and bigoted speech, while it may be legally protected, is anathema to our values.”

“Those voices,” he added, “stop rather than encourage the dialogue and real debate that makes us stronger.”

Other anti-Israel students also used the march to promote their agenda, with similar messages posted at Temple University and the University of Massachusetts-Amherst, according to the Anti-Defamation League, which commended the school for issuing a statement making clear that “invoking discriminatory language reeking of thinly veiled bigotry, prejudice, anti-Semitism or other behavior” is inconsistent with its mission.

UJA-Federation of New York also protested the rhetoric and praised the college’s swift action, saying that “Students of all backgrounds deserve a campus experience that is free from intolerance and prejudice” and urging “all parties involved to disavow hateful language against other students and take appropriate measures to ensure this does not happen again.”