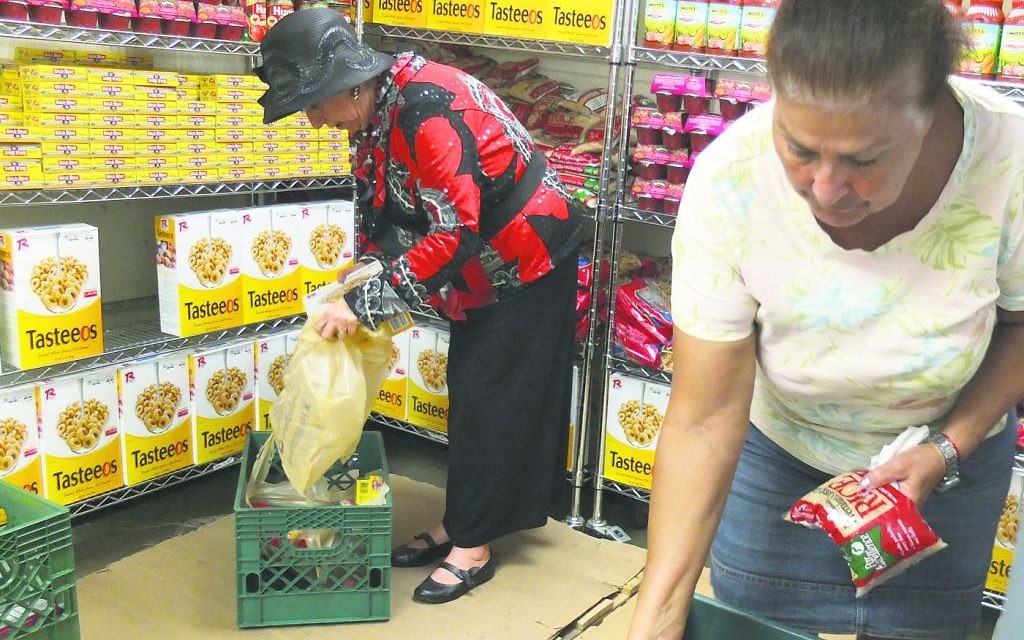 Ion Shubernetskiy’s shirt is graying. His hair is thin; his blue sneakers are bargain-bin flimsy. But the 77-year-old Moldovan, a former factory worker, is comfortable cutting corners when it comes to his personal appearance.

“Hey, I buy what I can afford. I don’t go into Manhattan,” he jokes in Russian, through a translator. What he won’t sacrifice is his kashrut, or kosher diet. Keeping kosher under Communism was difficult and dangerous. He won’t stop now, although he lives on public assistance.

For both religious and financial reasons, then, Shubernetskiy shleps over an hour each way from Flushing to a kosher food pantry, also in Queens every week. It’s one of more than 30 kosher food pantries and soup kitchens in the city’s five boroughs supplied year round by City Harvest, New York City’s nonprofit food rescue operation, with fresh produce and other provisions.

“We live on a very fixed income,” Shubernetskiy said. “Thank God, everything is kosher [here], we feel free; we come; we pick up.”

Yet not much word of City Harvest’s growing work in the kosher sector seems to have reached the Jewish world. Donors who also give to other Jewish causes fund less than 5 percent of City Harvest’s kosher program; the rest is funded out of the organization’s general operating budget.

Using a new storage facility, the organization will deliver 35 percent more kosher food during this year’s five-week High Holy Day season than it did last year.

City Harvest has been “rescuing” extra food from restaurants for 30 years. It started its kosher program in 1999 when it concluded there was a lack of communal awareness around Jewish poverty, said Leslie Gordon, City Harvest’s director of agency relations.

Today, City Harvest’s kosher program has a truck used exclusively for kosher pickups and deliveries and, in energetic, curly-haired Rebecca Glass, a Hebrew-speaking manager proficient in kashrut. Glass keeps track of which food programs accept which heksher, or kosher certification; works with donors and drivers to help them recognize kosher food donations and set them aside, and conducts “canned food sorts” with an ecumenical staff of volunteers to identify kosher products for the program.

The Queens Jewish Community Council’s tiny, one-room food pantry receives about 25 percent of its stock from City Harvest, said Cynthia Zalisky, the council’s director. It also depends heavily on the nonprofit, nonsectarian Food Bank for New York City, and on the Metropolitan Council on Jewish Poverty, which is an agency of UJA-Federation.

“The wonderful thing about City Harvest for me is that they provide produce,” said Zalisky, the gently smiling director of the Queens Jewish Community Council. “It makes me happy as a Jewish mother to provide that. It doesn’t come with our standard allocation [from bigger suppliers.]”

City Harvest’s complicated identity as a nonsectarian agency offering a kosher program puts it in a tough spot at a tough time. The broader economy, which hasn’t recovered from the 2009 recession, has kept a lid on nonprofit fundraising.

In 2011, for the second year in a row, charitable giving barely grew, according to “Giving USA,” considered the yearbook of American philanthropy. At UJA-Federation, donations to the 2011-2012 campaign were down slightly.

Yet the economy is also driving an increase in need for nonprofits’ services.

“We get cases of people calling me and saying, ‘Do you have food, because I have nothing in my refrigerator,’” Zalisky said. “I never had that before. It’s eerie.”

Despite the spike in need, giving that supports basic services has fallen out of favor with both large and small donors.

“I say to donors, do whatever you want to in health care and education, but still give to the federation, because they take care of the safety net,” said Andres Spokoiny, chief executive officer of the Jewish Funders Network, a nonprofit service organization for philanthropists.

But this may be precisely where City Harvest’s difficulty lies in funding its kosher program.

“The issue of Jewish giving is one of the most difficult to define in the philanthropic world,” Spokoiny said.

Some American Jews see Jewish giving as by Jewish donors, to Jewish organizations for Jewish beneficiaries. Others see it as any giving that is informed by Jewish values.

Both schools of thought tend to identify the federation system, not a nonsectarian organization like City Harvest, with the Jewish social safety net. Then, too, Jewish givers motivated by universal values may well support City Harvest — the organization actually raised more money in 2012 than in 2010 — but not necessarily its kosher program.

City Meals on Wheels feeds as many as a quarter of the city’s 16,000 homebound elderly. The large majority of its 4,000 clients are kosher-observant.

It “absolutely” seeks out supporters who tend to give to Jewish causes. Some of its biggest backers are Jewish funders who want to support both kosher and non-kosher programs; some donate only to the kosher one, said Executive Director Beth Shapiro.

“It’s a constant navigation,” she said.

Nonetheless, City Harvest has made a start.

For the past three years, the Charles and Mildred Schnurmacher Foundation has directed its City Harvest donation — $25,000 this year, at the higher range of its grants — to the kosher program, said Ira Weinstein, the foundation’s president.

“It sort of tweaked my interest, the Jewish aspect,” Weinstein said. “City Harvest is known to be nonsectarian … If people knew about the kosher kitchen at City Harvest, they might give.”