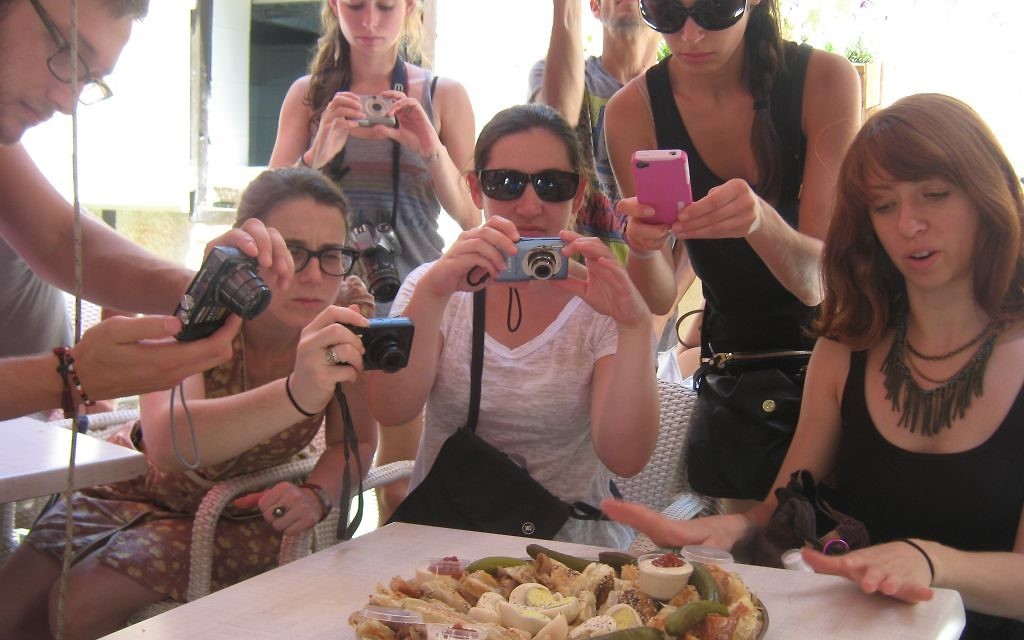 Jerusalem — The daughter of a chef and the communications director for a children’s cooking TV show, Natasha Miller is a self-described “huge foodie.”

Her boyfriend, Alex Blau, classifies himself as an “almost obnoxious foodie,” who takes constant photos of his meals.

So when Miller, who had been thinking about going on a Birthright Israel trip but was “sort of on the fence,” found out about a culinary-themed one, she “was sold” — and convinced Blau to come along.

“I had been sort of back and forth about doing Birthright as well,” Blau said, “but I thought the culinary trip was going to be a really wonderful way to explore a number of cultures without dealing directly with the politics.”

As Birthright celebrates its 13th year — or bar mitzvah — in operation, more young adults are arriving in Israel on specialty trips, experiencing the country through the lens of food, fashion, music, literature and more.

By the end of the summer, more than 300,000 young adults will have participated in a free trip from Taglit-Birthright, which provides Jews ages 18-26 with a 10-day Israel experience. Since the program’s inception, just over 1 percent, or almost 4,000 participants, have taken themed trips. Of the more than 23,000 participants this summer, approximately 750 — over 3 percent — will take part in joint trips that focus on specific themes.

“We think it is extremely important for us to experiment time and again with new approaches,” Gidi Mark, CEO of Taglit-Birthright Israel told The Jewish Week. “We know that we will not be able to be attractive to everybody all the time if we don’t diversify … We try to experiment as much as possible in order to cater to so many diverse people.”

The specialty trips are financed through grants from the Charles and Andrea Bronfman Foundation, which fund the additional trip elements as well as the participation of Israeli young adults for all 10 days of the trip — traditional trips include Israeli peers for only five. After the foundation approves each new program, it is generally funded for two installments.

“We encourage trip organizers to be creative, to come to us with ideas. We also have our own internal brainstorming sessions that are looking all the time for new ideas to become more creative,” Mark said.

“This trip has the most applicants of any trip we run,” said Jodie Katz, senior education coordinator for Israel Experts. “I’ve read so many [application] essays of people who said, ‘I wasn’t sure I wanted to come on Birthright and then I saw that there was a culinary trip, and I thought to myself, that is the way I want to see Israel.’”

Katz says they had about 140 people apply for the 34 spots on the most recent culinary trip, compared to 30-60 for their regular tours.

“We are looking for people who are at the very least foodies, and at the very most professionally associated with the culinary world,” said Katz. “So much of the culture [in Israel] is based on food, and one of the things we wanted to expose to people is the culinary aspect, not necessarily the fine dining and chef aspect but really the people, the food of the people coming from all of the different countries [that have settled in Israel].”

The group experienced the classic stops like Yad Vashem and the Dead Sea, plus culinary highlights like meeting with Israeli food writer Janna Gur, touring a winery in the Negev, eating dinner in a Druze village and cooking a meal for 500 soldiers at the Oketz IDF base.

Michael Finkle, who has worked as a front-of-the-house captain for various high-profile New York restaurants, came on the trip “to understand the cultural side of Israel,” he said. And Jen Bardekoff, a vegan who runs a food walking-tour company in Los Angeles, says the culinary trip was ideal since she bases her travel destinations on food.

“Food is very important to me when learning about different countries and different cities,” she said.

In addition to the culinary trip, other specialty trips include ones tailored to the interests and needs of high-tech entrepreneurs, the LGBT community, teachers, medical students, those with Asperger’s, recovering addicts, the hearing-impaired, wheelchair-bound and even those with digestive disorders.

In addition to its traditional tour, The Amazing Israel trip organizer offers an “extreme” Birthright with an focus on biking, hiking, rappelling and spelunking; a “No Limits: In Motion” group for participants in wheelchairs and a trip called “The Sound of Music: Israel Arts Spotlight.”

And though the specialty groups remain a small fraction of the trips Birthright runs, their impact is widely felt.

“Inside these specialty groups, in addition to the theme that identifies or describes the group, there are more experiments that we can afford to audit during the 10 days,” said CEO Mark. “The good ones are implemented with the other groups in order to make sure that we are constantly at the front of development … ”

Mark noted that many of the elements that are now “part and parcel of the regular 10-day experience started in specialty groups,” in particular the organization’s inclusion of cultural stops in its exploration of “Modern Israel.”

To apply for this summer’s music trip, which ran July 15-26, participants filled out an extra application detailing their connection to music, said Rachel Nissim, program director for Amazing Israel. About a third of the participants brought instruments on the trip, she said, the highlights of which included a bassam drum music session, a performance at the children’s hospital at Tel Hashomer, meeting fellow music students at the Rimon Music School and putting on a live show for the ISraeli organization Save a Child’s Heart. The group also experienced some classic Birthright stops through the lens of music.

“All Birthright [trips] go to Yad Vashem,” said Nissim, “but we got a guide who had a qualification in music, and she gave an extra perception of music within the Holocaust, which was her special subject.”

Alice Hamsen, 24, brought her trumpet on the trip. The part-time professional musician who lives in Denver said she grew up in a small town in Montana without many connections to Jews her age.

“It’s been really great to meet a lot of other musicians [who are participants],” Hamsen told The Jewish Week on the last day of her trip. While she didn’t know much about Israeli music beforehand, “I’ve been surprised by what the pop music is here. I feel like there is a very unique style of music [in Israel].”

Another trip provider, Hillel, runs Birthright groups for college students — including niche programs for those in fraternities and sororities, specialized options for those who are deaf or hard of hearing, and a tour that focuses on fashion.

Young fashion-oriented Jews make up “a population that is unserved by the Jewish community,” said Esther Abramowitz, Hillel’s Birthright coordinator in Israel. “These students would not necessarily come on a regular Birthright trip. I thought it would be fun to bring them together so they could meet each other, and also to start looking at Israel through the lens of fashion and design.” The trip is running for the second time this month.

The group will meet with Israeli fashion designer Idit Barak, visit the Center for Bedouin Embroidery and hang out on Ben-Yehuda Street in Jerusalem with local fashion students. The 10 days culminate in the presentation of a fashion project the participants have worked on throughout the trip. During the winter session, they were asked to create their version of a head covering, which included a purple shtreimel designed for women and a gold-and-silver hat described by the students as “what Lady Gaga would wear to the Kotel.”