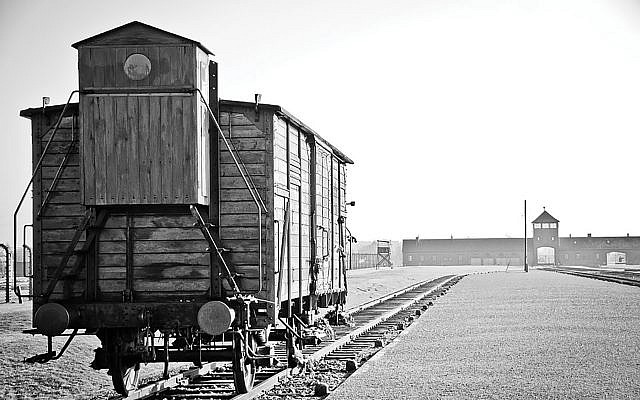 The tracks leading to Auschwitz. An attorney for the survivors said that Hungarian Jews were stripped of bank accounts, insurance policies, cash and personal property valued at the time at more than $1 billion. Pixabay

The possibility that Hungarian Holocaust survivors might for the first time have their day in court to press for Holocaust reparations inched a bit closer with a ruling by a U.S. federal appellate court that survivors may sue the Hungarian government and its national railroad in the United States.

The U.S. Court of Appeals for the District of Columbia overturned a lower court ruling that held that Hungary cannot be sued because of the Foreign Sovereignty Immunities Act. But the appeals court said the act does not apply because of an exception in the act that permits suits in cases in which plaintiffs’ property was taken.

The suit alleges that following the Nazi occupation of Hungary in March 1944, “560,000 Hungarian Jews — 68 percent of Hungary’s pre-war Jewish population — were killed in one year. … In 1944 alone, a concerted campaign by the Hungarian government marched nearly half a million Jews into Hungarian railroad stations, stripped them of all their personal property and possessions, forced them onto trains, and transported them to death camps like Auschwitz, where 90 percent of them were murdered upon arrival.”

Marc Zell, an attorney for the survivors, said the Jews were stripped of bank accounts, insurance policies, cash and personal property valued at the time at more than $1 billion to $2 billion.

“But with the passage of 70 years, with interest and everything else, this number has exploded,” he told the Times of Israel. “We didn’t put a number in this case, but if it goes forward we’ll be asking for tens of billions of dollars of compensation, which is the amount that would be owed based on the value of the property that was taken at the time of the deportations to the camps.”

The suit was filed on behalf of 14 survivors of the Hungarian government’s pogrom, four of whom live in the United States. The others are from such countries as Canada, Australia and Israel. The lead plaintiff, Rosalie Simon, who now lives with her daughter in Floral Park, L.I., told The Jewish Week in an email: “For me, this case is not about money. It is about holding Hungary accountable to history and to the world. Hungary must acknowledge its part in the Holocaust so that people will know and not forget.”

The appellate court — which also ruled that the case may properly be brought in the U.S. — made its decision on Dec. 28 by a 2-to-1 vote, and attorneys for the Hungarian government and the Hungarian State Railways have asked that the full court of 11 judges retry the case. That same motion is also pending in another case in the same court brought by the heirs of a consortium of four German Jewish art dealers who are seeking to recover a $250 million collection of medieval relics that they claim was sold to Nazi Germany under duress for one-third its value in 1935. The three-judge panel in that case similarly ruled that the heirs may bring their suit in the U.S.

Should the appellate court deny the motion for a retrial, both cases would go back to the District Court. But before that happens, defense attorneys in the Hungarian case might appeal to the U.S. Supreme Court because an appellate court in Chicago ruled in a similar Holocaust reparations case against the national railroad’s motion that survivors must first exhaust all legal remedies in Hungary, something these judges said was unnecessary.

The Chicago case, which was filed 13 years ago, names both the Hungarian railroad and the Hungarian national bank, as well as private banks. One of the attorneys in that case, Richard Weinberg, said that although the private banks are “not guilty of wartime theft, they took over banks knowing that part of their wealth was what had been acquired from Jewish wealth. … The banks took over Jewish banks during the Holocaust and the present-day banks are holding stolen Jewish assets.”

Weinberg said attorneys complied with the appellate judges and filed their case in Hungary, but that the suit was dismissed because Hungarian law required the plaintiffs to provide “corroboration of the plaintiffs’ assertion that property was taken from them while they were on the train. But everyone on those trains were shipped to Auschwitz.”

Florida attorney Sam Dubbin, who filed a friend-of-the-court brief in the Washington case on behalf of the Holocaust Foundation USA, said he hoped there would be a trial soon because “the plaintiffs are elderly and many are ill and they should see a recovery [of their property] from the Hungarian defendants in their lifetimes.”

“It is also an important symbolic victory because the courts are beginning to be more supportive of the rights of Holocaust victims,” Dubbin observed. “A decade ago, victories for survivors in [such] litigation were rare. I think there is growing recognition that the lessons of the Holocaust must not be ignored even though [nearly] 80 years have passed since the end of the war. Not only is the rise of anti-Semitism a factor, but the spread of hatred and genocide around the world is not going away. Perhaps the courts see their role in setting an example that those who collaborate and profit from genocide can never rest easy; you wouldn’t expect them to have a different approach.”

Chuck Fax, another defense attorney in the Washington case, noted that there was a similar case pressed by survivors against the French railroad that had been dismissed on the basis of sovereign immunity. The survivors then agreed to an out-of-court settlement.

He agreed with Dubbin that the judges who ruled in his case have shown extraordinary sensitivity to the condition and experiences of the named plaintiffs. “… There is a greater awareness generally about the plight of minorities who have been discriminated against and subjected to deprivations over the years.”