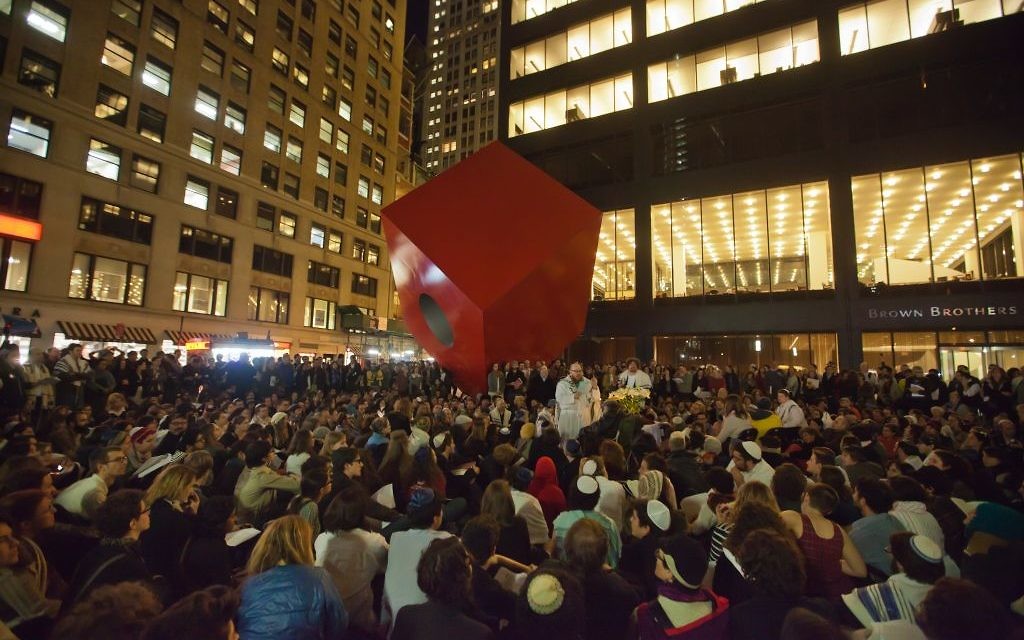 In a turnout that exceeded the expectations of even the event’s organizers, as many as 1,500 people attended a Yom Kippur service Friday night within yards of the Occupy Wall Street protest in Lower Manhattan.

Participants in the service, organized by supporters of the protest, included many of those involved in the demonstration, local Jewish residents who had come simply for the service itself, and non-Jewish onlookers.

Gathering shortly before dusk in the plaza of Brown Brothers Harriman, a building directly across Broadway from the site of the protest, Zuccotti Park, participants arranged themselves in concentric circles around a small table with a blue tablecloth, a vase of flowers and a Torah on loan from an Orthodox synagogue. Many of those in the plaza wore prayer shawls and kippot.

Daniel Sieradski, the local Jewish activist who took the lead role in organizing the Kol Nidre service, opened the event with a few remarks about why he had done so and why he believed the service was so significant. Those comments were followed by the liturgy itself, led by Avi Fox-Rosen, a musician and singer, and Sarah Wolf and Getzel Davis, students at the Jewish Theological Seminary of America and Hebrew College.

The liturgy combined traditional elements of the Kol Nidre service with calls for social justice and references to the protest across the street. One such moment came with recital of the Aleinu prayer, in which participants were invited to shout out something they planned to do in the year ahead to make the world a better one. Among the commitments were pledges to work for “health care for all” and “to stand up against those in power,” reflecting some of the sentiments behind the Occupy Wall Street protest.

Speaking to The Jewish Week before the service, Sieradski said the idea for the event came from Rabbi Arthur Waskow, the Philadelphia-based rabbi who founded the Shalom Center, an organization promoting both political action and spirituality, and the creator, in the 1960s, of the Freedom Seder. The suggestion followed a potluck Shabbat dinner held at the protest the previous week, said Sieradski, who calls himself an anarchist who believes in one power and one power only — the Divine.

Sieradski, who is now planning to erect a sukkah in or near the protest this week, said “every denomination of Judaism” was involved in bringing about the Yom Kippur service. In addition to the Torah, which came from a congregation that wished to remain anonymous, organizers received 100 machzors, or prayer books, from the Rabbinical Assembly, an arm of the Conservative movement, and the help of students or rabbis from JTS, Hebrew College and the Reconstructionist Rabbinical Assembly.

The Chabad movement has helped organizers obtain a pop-up sukkah — “not because they identify with the protest,” Sieradski said, “but because they want to help Jews practice their Judaism wherever they wish to do so.”