On Friday night, hundreds of Polish and Diaspora Jews gathered together to celebrate a Passover seder in the former Warsaw Ghetto, 76 years to the day after the Jews imprisoned there began a bloody last stand against the Nazis.

Known as the Warsaw Ghetto Uprising, the fierce battle started on April 19, 1943, and saw the Jews hold control of the ghetto for nearly a month until SS-led German forces systematically burned it to the ground, block by block. It was the largest single violent act of defiance by Jews during the Holocaust.

The seder was held at Warsaw’s Hilton hotel, which overlooks the former ghetto boundary, and was conducted in parallel Polish and Hebrew versions by Poland’s head Chabad-Lubavitch Rabbi, Shalom Ber Stambler, and his 13-year-old son Yossi Stambler.

Many of the roughly 300 visitors who flew in from abroad had relatives who at one point lived in the ghetto. They joined 100 local Jews in the retelling of the exodus story, and, towards the end of the seder, united in song.

Alan Stankowski, director of the Warsaw Ghetto Museum, which is scheduled to open in 2023, said the ceremony had more than just symbolic importance for the locals who attended.

“This is a different experience than the Israelis have, for many Polish Jews, because in Israel you have many big families gathering a lot of the time — 10, 15, sometimes 20 people,” Stankowski said. “Here, many people are alone, many of them have a non-Jewish partner, and this is the moment when they can be together with the community, with their Jewish friends — and even if they’re not religious, this is a very special moment for them.” 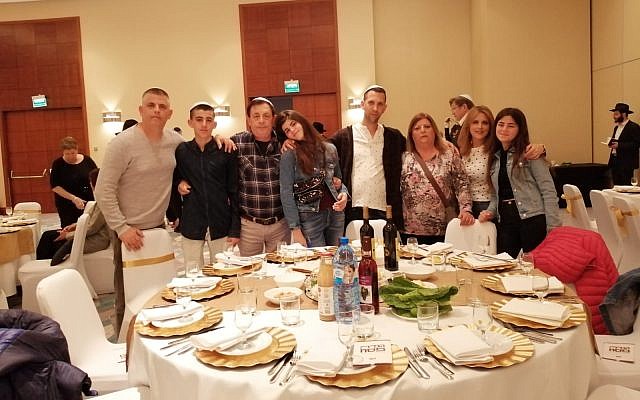 Attendees at the Warsaw Hilton, April 19, 2019. Hundreds gathered to celebrate the first seder in the former Warsaw Ghetto since it was razed in 1943. (Courtesy Chabad of Warsaw/via Times of Israel)

The elder Stambler said that as far as the idea for holding the seder in such a historically significant location, things just fell into place.

“We were looking for the right place to make the seder, and it happened to be that seder night fell out on the date of the Ghetto Uprising, and it just worked out naturally. We saw the interest of the Polish people and Polish media in the event,” Stambler says.

“I also told them: At the end of the day, the warriors of the Warsaw Ghetto Uprising weren’t just fighting to win a military victory, but a victory of identity. We are who we are, and we will go all the way. And this was the message for the many participants of the seder – we all belong to the same idea, and we are all Jews, and we are proud of it,” he said. 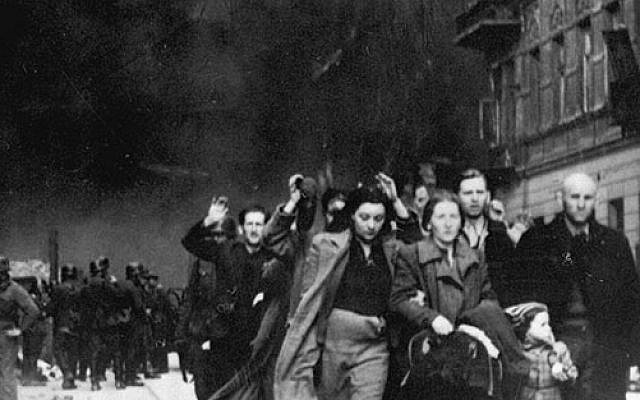 An iconic image from the 1943 Warsaw Ghetto Revolt, during which Jewish resisters temporarily staved the Nazis’ plans to deport the population to death camps (public domain/via Times of Israel)

Around the Polish capital Friday residents pinned yellow paper daffodils to their clothing to commemorate the anniversary of the uprising, as well as the memory of the 3 million Polish Jews murdered in the Holocaust.

The Great Synagogue of Warsaw, which the Nazis blew up in a final symbolic act as they put an end to the uprising, was also remembered on the eve of the anniversary. For two hours on Thursday night, an image of the synagogue was projected in light onto the modern glass building now on the site where the synagogue once stood. 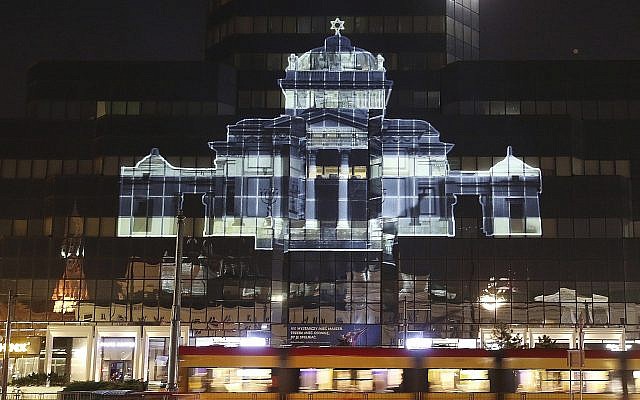 The Great Synagogue of Warsaw, which was destroyed by the German forces during World War II, was recreated virtually with light as part of anniversary commemorations of the 1943 uprising in the Warsaw Ghetto, in Warsaw, Poland, Thursday, April 18, 2019. The multimedia installation, which included the archival recordings of a prewar cantor killed in the Holocaust, is the work of Polish artist Gabi von Seltmann. It was organized by a group that fights anti-Semitism. (AP Photo/Czarek Sokolowski/via Times of Israel)

Feldschuh was known throughout the Warsaw Ghetto as a piano prodigy, and despite her young age was a soloist with the ghetto’s Jewish Symphony Orchestra, as well as an accomplished composer. 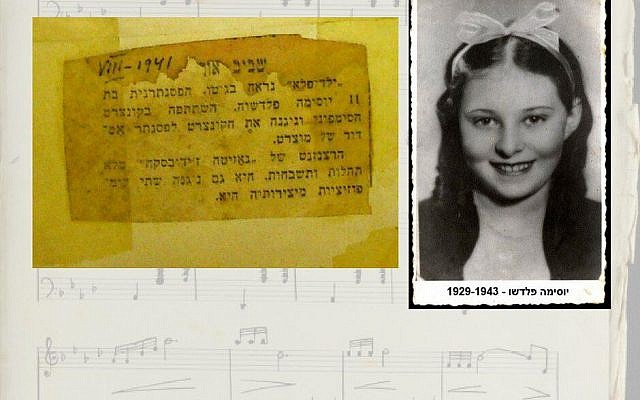 Ben-Shem Da Silva says that she found out about the seder only after being invited to a tribute concert held by the POLIN Museum of the History of Polish Jews, which reproduced in its entirety Feldschuh’s first concert with the Jewish Symphony Orchestra.

“We discovered that this concert was the day before the seder, and we had no idea that this was the first time that a seder was being held on what was the ghetto’s border. So it’s almost like a plan made in heaven,” Ben-Shem Da Silva said.

As the ghetto’s Jews were staving off the Nazis, Feldschuh was in hiding in the small village of Pustelnik 40 kilometers (25 miles) east of Warsaw, dying of tuberculosis. The seder meal would be her last, and she died the next evening at midnight of April 21, according to a journal kept by Feldschuh’s father, Rabbi Reuven Ben-Shem Feldschuh.

The family of non-Jews hiding Feldschuh’s family along with a number of others was nervous that if the neighbors saw a burial, one of them might alert the Nazis. Reuven Ben-Shem Feldschuh was forced to bury his 14-year-old daughter hurriedly in the middle of the night, in a shallow grave, according to the journal. His wife, Feldschuh’s mother, plagued by grief, took her own life several days later.

Reuven Ben-Shem Feldschuh went on to survive the war and immigrate to Israel, where he met his second wife, Ben-Shem Da Silva’s mother. His 800-page chronicle is currently being transcribed at Yad Vashem, and is considered a seminal record of the ghetto history due to its comprehensive nature.

“Knowing that I was on the former ghetto grounds, for me, was huge,” said Ben-Shem Da Silva, who like her aunt is a pianist. “I felt like a victor. I don’t know if that’s the right way to put it, but I felt like I’m here, and I’m here with my next generation, as well – with my girls. We felt like we were doing something incredible, and that our ancestors were looking at us really proudly, like, ‘We’re here again.’”