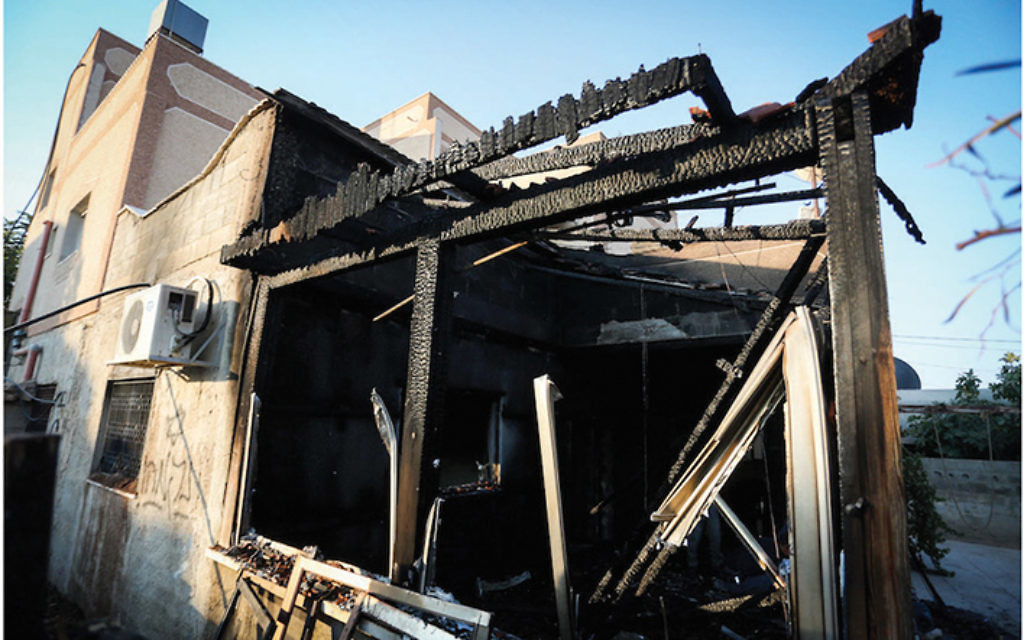 Taxpayer dollars in the United States and Israel are subsidizing Jewish terrorism against Arabs, a complaint filed with the New York state Attorney General’s Office alleges.

The accusations follow a recent expose by Israel’s Channel 10 about the work of the 13-year-old Israeli nonprofit Honenu, which provides financial support to Jews convicted of or on trial for violence against Palestinians, including so-called price-tag attacks in the West Bank. The television program aired earlier this month in the aftermath of the July 31 firebombing of a Palestinian home in the West Bank village of Duma that killed an 18-month-old boy and his father. No suspects were arrested in the attack, but Jewish extremists are suspected. The attackers scrawled the Hebrew work for “revenge” at the site of the arson.

Since 2003, Honenu has operated a New York-based U.S. fundraising arm. In 2010, the last year for which data is listed, the tax-exempt organization has raised $233,700 in the United States, according to tax filings.

Critics say Honenu’s activities are no different from those of Palestinian groups that provide material support to Palestinian terrorists.

“Honenu is doing exactly what Hamas and the PLO have been criticized for — providing personal support, if not incentives, for those who commit terrorist acts against others,” says the complaint sent Monday by T’ruah, The Rabbinic Call For Human Rights, to the charities bureau of New York state Attorney General Eric Schneiderman.

The complaint asks the attorney general to investigate Honenu and its fiscal sponsor, the Central Fund of Israel; both are located in New York state.

Reached by telephone in Israel, Honenu’s executive director, Shmuel Meidad, declined to be interviewed and referred inquiries to a spokesman. The spokesman asked that JTA submit its inquiry in writing; as of press time, no response had been provided to emailed questions about the Channel 10 report and T’ruah’s action.

“They respect the court’s rulings,” he said of Honenu. “They don’t decide who is good and who is bad, they don’t determine who is guilty and who is innocent. They operate within the bounds of the law.”

Among those to whom Honenu has provided legal help, according to a ProPublica report published in July 2014, is Yigal Amir, the assassin of Israeli Prime Minister Yitzhak Rabin.

In 2013, the year examined in the Channel 10 report, Honenu sent funds to the family of an Israeli convicted of massacring seven Palestinians in May 1990, the families of two Jewish-Israelis convicted of attempted murder for trying to plant a bomb at a girls school in Arab eastern Jerusalem in 2002, and the son of a former Israeli Knesset member who kidnapped and abused a Palestinian boy in 2010.

Most of Honenu’s budget does not go to convicted Jewish extremists. Much of it is used for the defense of Jews on trial for activities such as violence against Arabs and refusing orders to vacate illegal Jewish settlement outposts in the West Bank. The group helps approximately 1,000 individuals under arrest per year, according to the Honenu website.

“Soldiers and civilians who find themselves in legal entanglements due to defending themselves against Arab aggression, or due to their love for Israel, have an organization that will come to their aid 24 hours a day,” Honenu says on its website. “In the Arab-Jewish conflict in Israel there are dozens of foreign funded organizations helping our enemies. We are there for those loyal to the Jewish people.”

Honenu’s 2013 budget was approximately $600,000, according to documents obtained by Channel 10. About one-quarter of the money went to lawyers defending individuals on trial for actions against Arabs or for activities in the West Bank, and about $50,000 went directly to Jewish prisoners, according to the documents. The money included about $14,000 for the families of two men who planned the bombing of the Arab girls school in Jerusalem, and some $1,600 to Ami Popper, who murdered seven Palestinians in 1990. Zvi Strock, who received a 2 ½-year sentence for kidnapping and abusing a Palestinian boy, also received a payout. Strock’s mother, Orit Strock, was a member of Knesset with Naftali Bennett’s Jewish Home Party from 2013 to 2015.

“In the wake of the horrific terrorist bombing that killed an 18-month-old and his father, and left his mother and brother in critical condition, we in the U.S. Jewish community must examine our own responsibility for such crimes,” T’ruah’s executive director, Rabbi Jill Jacobs, told JTA after the group sent its complaint to the attorney general.

“We have no complaint with the use of money for legal assistance; Honenu itself admits that the money also goes for general support of those accused or convicted of these horrific crimes,” she said. But, “just as we would be furious to learn of tax-exempt money going to Hamas or ISIS, we must not allow U.S. taxpayers to subsidize money that is given strings-free to members of our own people who are accused or convicted of terror.”