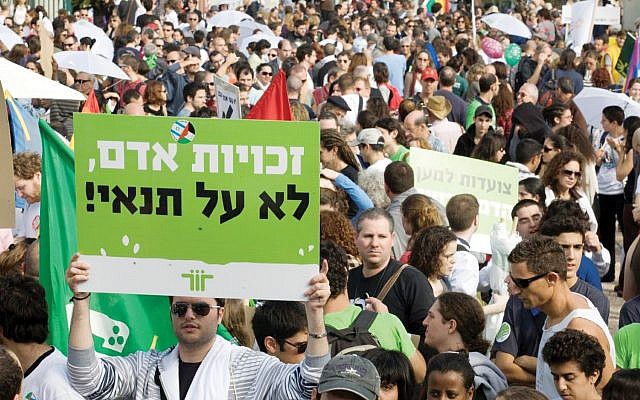 During a recent rally in Israel, protestors hold signs that read, “Human Rights Without Conditions.” Courtesy of ACRI

Jerusalem — During her long career in resource development for Israeli organizations that promote civil/human rights and social change in Israel, Rachel Canar has witnessed many trends, but few as challenging as the decrease in fundraising dollars for these social justice organizations.

“People may know about a foundation that has closed down in Israel, but no one from outside the sector seems to be aware of the big picture,” said Canar, who called the trend a “crisis.”

“When you look at all the donors that have left the region, or for other reasons stopped giving here, and a variety of other things that have happened or are on the horizon that promise to end or reduce funding sources, it is unclear to us how the field as we know it will continue. There is a serious question about which organizations will still be in operation and at what level in the next five-plus years,” she said.

Many NGOs have had to eliminate some of their programs and/or cut staff due to the funding crisis.

Fundraisers say many of the hardest hit Israeli NGOs are politically left-wing and promote the rights of Palestinians in the West Bank and Gaza, but they emphasize that almost all Israeli social change organizations have been affected by the downturn.

Canar’s observations are borne out by research recently published in The Conversation, an academic journal.

In her research on American Jewish giving to Israel, Brandeis University researcher Hannah Shaul Bar Nissim observed that the proportion of Jewish institutional giving to Israeli causes has fallen since 2009.

“I believe that several factors, including demographic and social changes, a diminishing perception of Israel as being in need and concerns over the Palestinian-Israeli conflict have probably been driving this decline for years, Bar Nissim wrote.

More recently, Bar Nissim said, “Israel’s increasingly conservative policies on social and religious issues, which are often at odds with what most American Jews support, might also be playing a role.”

Israeli fundraisers attribute the downturn to several developments, including the 2008 Great Recession, which resulted in lower donations to Israeli organizations across-the-board, and not just rights’ groups.

Another problem: the closure or diminished giving of international foundations like the Ford and Moriah Foundation and European governments like Norway to liberal Israeli causes.

In other cases, the founders of Jewish family foundations that supported Israel have died, and the second generation of family funders has other, non-Israeli priorities.

An Israeli resource development professional who requested anonymity said the organization NGO Monitor, an organization that actively discourages individuals, foundations and foreign governments from funding organizations it considers anti-Israel, has also had an impact on donations.

“Gerald Steinberg,” the founder of NGO Monitor, “has been very effective,” the resource development professional said. “He has in fact swayed European donors to believe that what [rights groups] are doing is corrupt or who knows what.”

The professional also blamed Im Tirtzu, a right-wing NGO closely aligned with the Israeli government that targets left-wing NGOs that, in its view, are trying to delegitimize Israel.

“They have been totally effective in misrepresenting the New Israel Fund, for example. If nothing else, they scare off donors, who don’t want to be associated with anything controversial,” the professional said.

Sam Kaplan, who works in the international relations department of the Association for Civil Rights in Israel (ACRI), said NGO Monitor and similar organizations take advantage of the funding transparency required of rights organizations to pressure donors to stop their funding.

“They personally contact the donors and ask, ‘why are you funding anti-Israel organizations?’” Kaplan said, emphasizing that he was speaking for himself and not on behalf of ACRI.

Steinberg, who launched NGO Monitor after the anti-Israel 2001 Durban Forum that spearheaded the BDS movement, and lawfare attacks, said many human rights NGOs “were portrayed as moral angels and not subject to any democratic checks and balances or accountability requirements.”

Today, Steinberg said, donors read NGO Monitor’s reports as well as independent evaluations of the NGOs, instead of relying on the self-reporting of the grantees.

“This process revealed major discrepancies between the advertised NGO agendas and actual impacts,” he said. “In some cases, the research uncovered terror connections involving Palestinian members of these NGO networks, leading to the end of major funding frameworks based in Europe.”

Additionally, “some private left-wing donors in the U.S. are realizing that funding Jewish and Israeli NGO to ‘oppose the occupation’ is ineffective or counter-productive. Donors now recognize that harsh tactics and polarizing actions of groups like B’tselem, Breaking the Silence and T’ruah [The Rabbinic Call for Human Rights] alienate Israelis and American Jews.” Steinberg said.

Tania Hary, executive director of Gisha, an organization that helps mainly Palestinian residents of Gaza navigate the bureaucracy of receiving permits to travel and move goods, said her organization has maintained its funding base but is finding it difficult to increase it.

“We’re working to diversify our sources of funding and not rely too much on any one source,” Hary said.

At a time when wars continue to rage in Syria and Yemen and millions of refugees and asylum-seekers are roaming the world “the Israeli conflict isn’t center stage,” Hary acknowledged.

Hary said her NGO is trying to draw attention to its work — which can entail reuniting a Palestinian family or enabling a Palestinian student to study outside of Gaza — by seeing it as part of a worldwide problem.

“There needs to be a response to crises in other place… But we’re trying to say it’s important not to lose sight of the change that’s needed here,” Hary said.