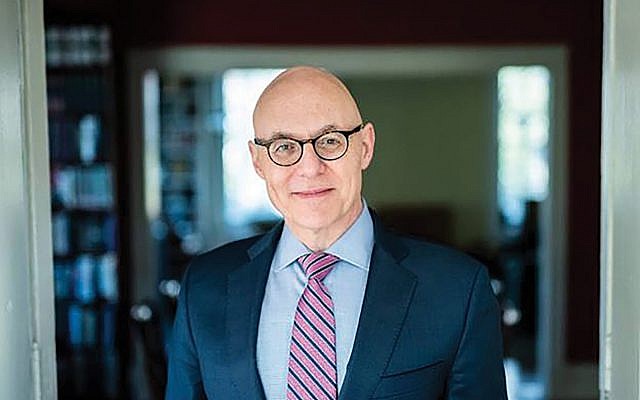 Choosing from within: Former Reform camper Andrew Rehfeld will become president of HUC-JIR next April. Courtesy of HUC-JIR

Hebrew Union College-Jewish Institute of Religion announced on Tuesday that its board of governors has chosen Dr. Andrew Rehfeld as its new president. The post has been filled by interim president Rabbi David Ellenson since the death of Rabbi Aaron Panken in an airplane crash in May.

A political scientist by training — he earned his Ph.D. at the University of Chicago — Rehfeld will be the first person without rabbinical training to lead the seminary since its founding.

Rehfeld will take over the post in April, becoming the 13th president of the Reform Movement’s rabbinical seminary. As president, he will oversee the rabbinical seminary’s four campuses: New York, Los Angeles, Cincinnati, and Jerusalem. He will also hold a tenured position as professor of political thought.

He joins HUC-JIR from the Jewish Community Federation of St. Louis where he serves as president and CEO. He is also a tenured professor at Washington University in St. Louis where he teaches political science, specializing in contemporary democratic theory.

A longtime camper and song leader at the Reform Movement’s Kutz Camp, Rehfeld previously served as director of the New Jersey region of NFTY, the Reform Movement’s national youth movement. He has also served on the board and executive committee of Washington University’s Hillel and the St. Louis Jewish Community Relations Council.

Rehfeld served as president and CEO of the Federation in St. Louis when a Jewish cemetery there was vandalized in 2017, an experience that may be increasingly important for Jewish communal leaders as anti-Semitic incidents continue to rise in the United States. “I don’t think you can explain the reaction without referencing what is going on today,” he said at a rededication ceremony for the desecrated cemetery in August 2017, according to the St. Louis Post-Dispatch. “And I believe it was due to a context of growing attacks that we were seeing first and foremost against the Jewish community.”

In a statement released by HUC-JIR, Rehfeld said: “I am deeply humbled by the faith and confidence that the search committee and board of HUC-JIR have placed in me. I am thrilled by the opportunity to work collaboratively with a dynamic professional team … across all four campuses to shape the future of professional Jewish leadership.”

He added: “These are challenging times for the Jewish people that I believe HUC-JIR, as a multi-faceted institution of higher education, is well suited to address.”

Joy G. Greenberg, a member of the university’s board of governors and chair of the presidential search committee, called Rehfeld a “distinguished academic and creative thought leader” who is “uniquely qualified … to lead the College-Institute in our mission to transform the Jewish community and the broader world,” in the HUC-JIR statement.

Rehfeld will begin his post nearly a year after the previous president, Rabbi Panken, died at the age of 53 when the plane he was flying with an instructor crashed shortly after takeoff in May.