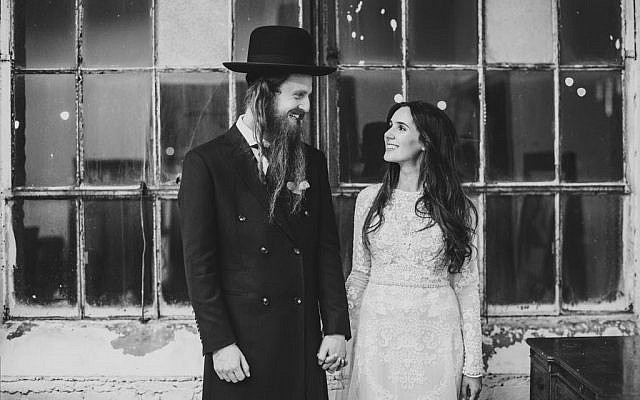 Zechariah and Leeann were married on October 16, 2018 at the Art Factory in Paterson, New Jersey. Courtesy of Gisele & George

She loved their music and bought a single admission ticket to their chanukah concert. That’s how Leeann Mor Evron met Zechariah David Goldschmiedt, guitarist and vocalist in the chassidic/soul/folk band Zusha. She was then 24, and he, 26.  It was December 17. 2017 and the New York-based band was playing in Leeann’s hometown of Miami, Florida.

The band had played Miami in November and Zechariah explains why they returned within a month: “We decided to go to Boca Raton, Florida to spend a Shabbat with our manager’s grandfather, who was in his 90’s and had never observed a Shabbat. Once we were there, it made sense to perform in Boca on Saturday night and continue on to Miami for a second performance.” That’s how Zechariah met Leeann.

Leeann recalls the day of the concert: “I was in my last year of graduate school at Florida International University, preparing for a Masters Degree in Interior Architecture.  I hadn’t slept for two days. But when my friend texted me about a Zusha concert, I decided to go. It was the first band in the Jewish world that I had liked.”

When she came into the hall, she walked up to the bar to order a beer and saw two guys playing chess. One of them was her bashert. Zechariah smiles: “From the first moment I saw Leeann, I thought she was beautiful, and I asked her if she wanted to go somewhere to talk. From that moment, we’ve been speaking every single day.”

The couple tried to meet every other week when he’d go to Florida or she’d come to New York. Leeann sighs: ‘The second he would leave, we’d make plans to meet each other again.”

Leeann and Zechariah come from different backgrounds. Zechariah is of German descent, whereas Leanne’s parents are Israelis of Moroccan origin. She grew up speaking Hebrew, but she didn’t read the language. She started to become more observant on a Birthright trip during college.

During their FaceTime relationship, Zechariah taught Leeann from the book of Tanya, the central text of Chabad Chassidism.  He notes: “A very powerful way to connect with someone is to learn with them.” Over time, her Hebrew reading improved and so did his spoken-Hebrew.

On January 1, 2018, Zechariah told Leeann on FaceTime that he wanted to marry her. He reflects: “It was important to me to marry someone who kept kosher and was Shabbat observant. But I wasn’t looking for a mirror image of me. What was important to me was authenticity. And Leeann is definitely authentic. She exudes an energy of being comfortable with herself.”

Interestingly enough, the namesake for the Zusha band is Rabbi Zusha of Anipoli, who on his deathbed in 1800, asked himself this question: “Zusha, why weren’t you Zusha?”

With music from the Red Hot Chili Peppers playing in the background, Zechariah officially proposed to Leeann on May 22 in a friend’s New York apartment, surrounded by both families. Leeann’s parents were charmed by Zechariah’s contagious smile. Reb Nachman of Breslov once said: “Always wear a smile. The gift of life will then be yours to give.”

Two days after their engagement, Leeann went to Israel for three months. Zechariah and other family members visited frequently and planned the wedding long-distance.

Leeann wanted a venue with unique architecture, and so they chose The Art Factory in Paterson, New Jersey. Rav DovBer Pinson, dean of the IYYUN Center for Jewish Spirituality, officiated. Zechariah and Leeann were married on October 16, 2018. Mazal tov.

More from the Matchmaker column here.