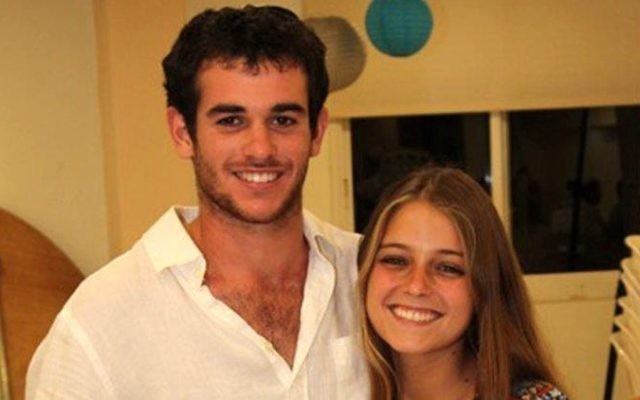 Yoav and Rotem met on the No. 940 bus from Jerusalem to Haifa. Courtesy

Yoav Ben-David was disappointed when the driver told him the express bus to Haifa (No. 960) was full and he had to wait for the regular bus. In retrospect, Yoav realized his good fortune. Otherwise, he would not have met Rotem Greenglick.  “When one door closes, another opens,” according to Alexander Graham Bell.

Yoav, then 21, first noticed Rotem at the departure gate of the Jerusalem Central Bus Station on Friday morning, October 18, 2013. Yoav remembers: “I saw this pretty girl, and I opened the door for her.”

But she wasn’t paying attention as she hurried to take a window seat on the slower bus No. 940. When Yoav got on the bus, there were many places to sit, but he eyed the empty seat next to Rotem. Before sitting, he made sure that the seat wasn’t reserved.

Rotem smiles. “It’s a good thing I was traveling alone. Otherwise I wouldn’t have met Yoav.” She had come to Jerusalem for a wedding and was returning to her position with Sherut Leumi, a national service program, which provides an alternative to serving in the Israel Defense Forces (IDF). Yoav, a soldier in the IDF, had come to Jerusalem to make a shiva call and was returning home for Shabbat.

At first, they didn’t speak to each other.  They were both tired and fell asleep almost immediately. They awoke before they reached their destination when the bus driver announced that he was off course.

Both Rotem and Yoav found themselves on the side of the road, not knowing what to do. “Once again there was the element of mazal,” says Yoav. “If the driver hadn’t erred,  we may not have started a conversation. But that’s when I grabbed the moment and asked Rotem for her number.” Rotem’s reply: “I’m turning 20 in six days and you can send me birthday greetings.”

Yoav did not wait six days. He sent Rotem a message the following night, and four days later he visited Rotem in her hometown of Raanana. Rotem recalls her mom’s first response: “She went ballistic when I told her I gave my number to a guy I met on the bus.” But if there are six degrees of separation in the “universal architecture of connection,” there are less degrees in Israel.  Rotem’s mom knew someone who knew someone in Sde Ya’akov, the religious settlement where Yoav’s family lived, and she was able to check out Yoav to her satisfaction.

“From the beginning, I felt our relationship was serious,” says Rotem.  “I too was serious,” adds Yoav, “but I didn’t want to talk about the future.  When the subject came up, I freaked out.”

By the spring of 2016, Rotem was getting a bit concerned.  “I wanted to get married and had it all planned in my mind.  But Yoav didn’t propose.” She decided to take time out in India.

“Soon after she left, I realized my mistake,” says Yoav.  He followed her to India, and while sitting in the Chabad House in New Delhi, the couple got back together. After returning to Israel, Yoav proposed to Rotem during Chanukah 2016 on the Jaffa promenade in Jaffa.

Yoav, a guitarist, is currently a student at the Mizmor School of Music in central Israel. Rotem, who comes from a musical family, is studying at the Kibbutzim School of Education in Tel Aviv.

In Rotem’s list of contacts on her cellphone, Yoav is listed in Hebrew as “Yoav min ha-oto-bus” (Yoav from the bus). As a friend noted: “This is truly a commuter’s love story.”