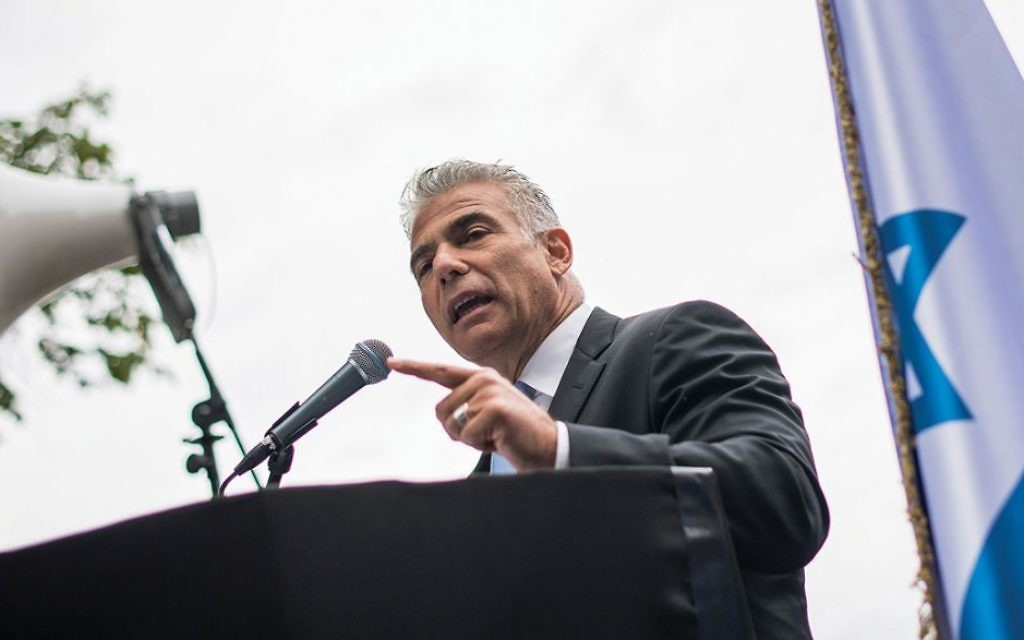 Tel Aviv – Yair Lapid has spent nearly two years in the political wilderness of the parliament. After a meteoric election victory three years ago that made him finance minister, Lapid’s centrist Yesh Atid party — which harnessed the energy of a wide-ranging social protest movement — lost nearly half its seats in 2015 and went into the opposition as the fourth-largest party in parliament.

Lapid, a telegenic television journalist and columnist who championed social justice issues, has made himself into a sort of shadow foreign minister, focusing his criticism on foreign policy and security.

But in the last week, Lapid has surged back into the public consciousness: two opinion polls on party preference indicated that if a new election were held, Lapid and Yesh Atid would emerge as the largest party — beating out Prime Minister Benjamin Netanyahu and his Likud party. A survey for Channel 1 news showed Yesh Atid with 27 seats, compared to Likud’s 22 seats.

Does that mean Lapid might become Israel’s next prime minister in 2019, when the next scheduled election will be held? The two polls indeed show that he has surged past Israel’s current opposition leader, Zionist Union Chairman Isaac Herzog. Ever since Herzog flirted with joining Netanyahu’s government earlier this year, his popularity has all but imploded.

Political analyst Tal Schneider said Lapid is benefitting from Herzog’s failure to galvanize a following as the leader of the parliamentary opposition.

“For a long time, the Zionist Union has given the public the feeling that it isn’t operating as an opposition, but as 24 Knesset members that are irrelevant,” she said in an interview on Channel 1. “The person who looks like an opposition leader is Yair Lapid. He’s convincing the public that he is doing something.”

In the last week, Lapid also seems to have benefitted from public frustration with Netanyahu over a controversy involving demands by the ultra-Orthodox coalition parties to shut down Sabbath construction work on a new train line. After Netanyahu bowed to the demand and instructed the train workers to halt their work, tens of thousands of Israelis who usually take the train found themselves struggling to get to work on Sunday because the delayed work forced the train executives to shut down service on the first day of the week.

Polls showed that the public blamed Netanyahu for the controversy and for not standing up to the ultra-Orthodox. As a result, Likud lost seats in the polls, though it seems that the party’s supporters mostly shifted to other right wing parties.

“There’s anger at Netanyahu,” said Mitchel Barak, an Israeli-American public opinion expert and pollster. “The train controversy shows that Netanyahu capitulates — and shows that Israel is closer to a theocracy than any Western country.”

And, with elections far away, it’s not hard for Israelis to register their frustration with incumbent leaders by throwing their support behind smaller parties. “What is clear is that the public is upset and disappointed with Netanyahu and wants a change,” he said.

Tzachi Hanegbi, a Likud legislator, noted that Israeli polls have painted a dire picture for Likud in the past, but when Israelis go to the ballot box, they throw their support behind Netanyahu. “We’re amused,” he told Channel 1. “The conclusion is that the right wing will win the election next time as well.”

Dov Lipman, a U.S.-born former legislator for Yesh Atid, said the party is winning more support in part because it has refused offers to join the governing coalition. He said the party is instead sticking to its main principles that call for the end of government entitlements to the ultra-Orthodox and reforms that are aimed at encouraging the integration of the charedi population into the Israeli mainstream. Many of those reforms — such as ending draft exemptions and subsidies for thousands of yeshiva students — are being undone by the current coalition, he added.

“Working out the relationship between religion and state, and finding that balance, is a big part of who we are,” he said.

Lipman also mentioned Lapid’s decision to focus on foreign and security policies, which is aimed at highlighting the absence of a full-time foreign minister (Netanyahu holds the portfolio), and stressing that the Netanyahu government “has no direction” on foreign policy. Lipman criticized Netanyahu for not building enough housing in the so-called “settlement blocks” in the West Bank and instead focused on isolated settlements.

On Monday evening, Lapid criticized the government’s handling of ties with the United States, urging a “smarter, flexible and effective” foreign policy. The U.S. doesn’t “understand why this policy has to involve our insulting them, solely with the aim of accruing gain here in Israel.”

Lapid made a surprisingly strong election performance in 2013, when he was able to channel some of Israel’s middle-class malaise over the high cost of living into a third place showing. As finance minister under Netanyahu, he had to push through unpopular spending cuts to balance Israel’s budget. He also tried his hand at housing reform to cool down Israel’s real estate market, but was unsuccessful.

Despite the robust showing in surveys for Yesh Atid, some analysts were skeptical that Lapid would be able to craft a governing coalition. They pointed out that right wing and religious parties would still control a majority in the Knesset.

Writing in Haaretz, Yossi Verter said that Lapid could likely turn in a strong performance, but find himself facing the same fate as Tzipi Livni in 2009; in that year, she won 29 seats as the leader of the centrist Kadima party, beating out Likud, but ended up as opposition leader because she couldn’t put together a coalition.

Yaacov Litzman, the leader of the ultra-Orthodox United Torah Judaism party, told a gathering, “I don’t talk to him and I don’t plan to talk to him … he insulted and disgraced the charedi public by taking their money from them.

“If he wants to have [a religious awakening], he should vote for all the things that he destroyed.”