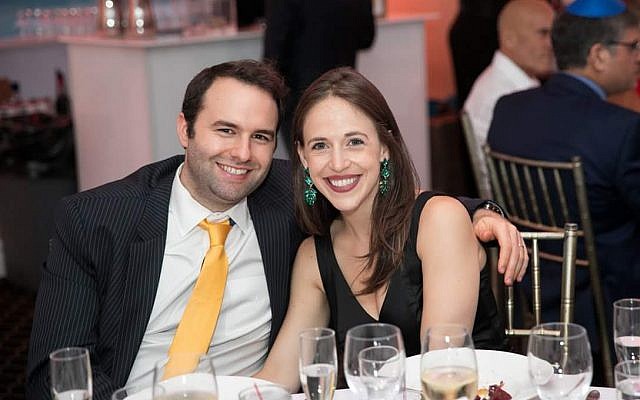 She was seeking a guy between the ages of 27-33 and he was out of her age range. Naomi Kachel was 27 when she met Sherman Fabes in November 2015. Sherman was 24.

“We’re perfect for each other but Naomi’s name popped up only when I updated my profile,” Sherman smiles. None of their mutual friends had thought to introduce them. “Probably because of our age difference,” reflects Naomi.

The couple met on OKCupid. Naomi explains why she chose this dating site: “It’s where my brother and co-worker met their spouses. And I liked being more than just a photo.”

One of the mandatory items was to fill in this blank: “On a typical Friday night I am…” Sherman and Naomi both responded in exactly the same way: “Dinner with family and friends.”  And that meant Shabbat dinner. Sherman recalls: “That was one of the reasons I first messaged Naomi.”

Both Sherman and Naomi come from traditional Jewish families. He adds: “I was looking for someone who had some involvement in the Jewish community. When I was growing up, the worst punishment my parents could give me was to tell me, ‘You can’t go to shul this week.’”

Sherman found his match in Naomi. After receiving her BS in Applied Learning and Development from the University of Texas, Austin, she received an MA. in Jewish Education from the Jewish Theological Seminary.  Since 2014 she has worked at the Central Synagogue in Midtown Manhattan and currently serves as the congregation’s camp director and family engagement coordinator.

“From the moment I received Sherman’s first message on the Wednesday night before Thanksgiving, I could tell there was something special about him,” remarks Naomi. “We spent the whole weekend texting each other and met as soon as I returned from El Paso, my hometown. We’ve pretty much been a couple since our first date for drinks and dessert on December 2.”

Sherman began thinking about marriage soon after they met.  Though friends and family expressed concern about the fast pace of their relationship, the couple moved in together after six months. “I’m not an impulsive person,” says Sherman. “But when you know, you know.”

Sherman, a native of Staten Island, enjoys sports, news, and the media. One of his first jobs was at the MLB sports channel where he earned an Emmy in 2015. Currently he is a media relations specialist for Ketchum, a marketing communications firm. Sherman received a BA in Journalism from the University of Missouri, with a major in Broadcast Journalism and Strategic Communication.

Over the Memorial Day weekend in 2017, Sherman proposed to Naomi in the Chicago Botanic Garden. They agree: “It was great to have that weekend to ourselves. It was a perfect way to start our engagement.”

The couple connects with the past. On the day of their wedding, Sherman went to the cemetery to visit his grandfather’s grave. Under the chupa, Naomi wore the ring her grandmother had bequeathed her and the names of her grandmothers were embedded in her wedding bouquet.

And they live fully in the present. Besides their busy family and professional lives, they lead the Young Professional group at their conservative synagogue, Or Zarua. Rabbi Scott Bolton, the congregation’s rabbi, officiated at their wedding at the Crystal Plaza in Livingston, New Jersey. The head of catering noted: “There was so much dancing that no one ever sat down. We didn’t know when to serve the food.”