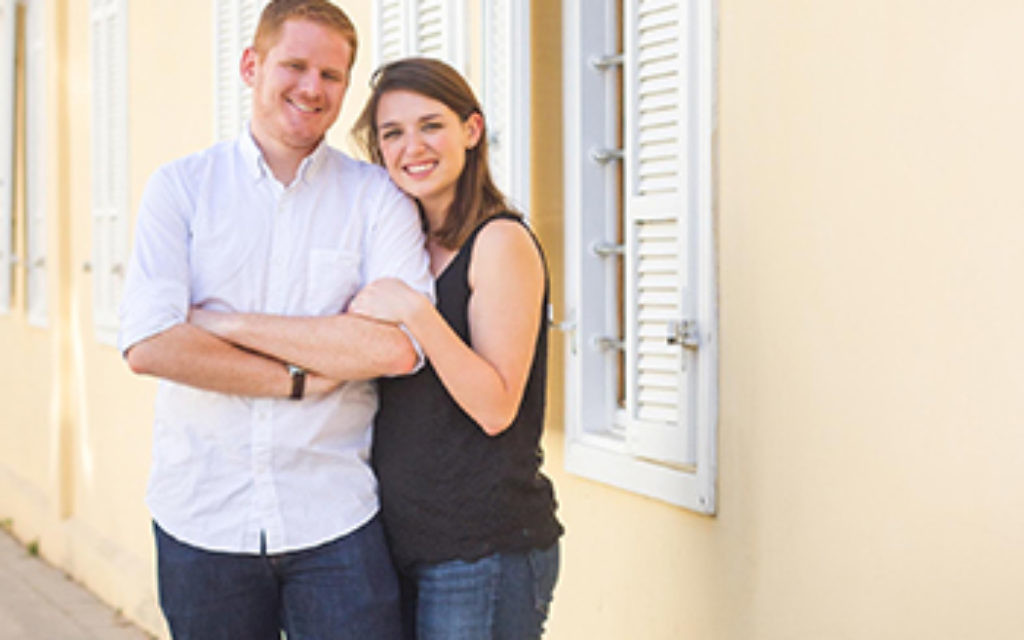 About two weeks after her arrival in Israel, Samantha traveled to the town of Rishon LeZion to visit her friend, Melanie. From the bus station, she called for directions. Melanie, herself a newcomer, couldn’t help, but said that her roommate, Ben, was a runner and knew the city.

Ben gave directions the Israeli way – turn left at this gas station, turn right at this pizza place, etc. In the end, Samantha found her way by using Google Maps. In the process, she also found Ben.

Samantha, 25, and Ben, 24, both received Bachelor of Arts degrees in the spring of 2012 – Samantha, in Religious Studies from the University of Virginia and Ben, in Political Science, from McGill University in Montreal. They both started service learning programs in the fall of 2012.

Ben had considered teaching English in France. Instead he opted for a teaching fellowship program with the Masa Israel Journey, and came to Rishon to work as a teacher’s aide in underserved classrooms. “It was an opportunity to teach and learn,” says Ben, “to give and get.”

Samantha came to Israel for another Masa Israel experience – the Yahel Social Change Program, based in the town of Gedera. She worked in an Ethiopian-Israeli organization in grassroots social change, including teaching and tutoring in English.

Samantha would routinely make the thirty-minute bus trip from Gedera to Rishon to visit her two friends. Slowly the relationship between Ben and Samantha began to morph, and at the beginning of 2013, they had their first official date at a bar in Rishon. Soon they became a couple. “The pace of life in Israel allowed us to spend more time together at the beginning of our relationship than if we had met in the United States,” Samantha said.

Ben was born in Haworth, New Jersey, part of Bergen County, home to a large Jewish population. “But I wasn’t involved,” says Ben. Samantha, a native of Richmond, Virginia, was very active in her small Jewish community.

“We’re different people, but we bring out the best in each other,” they say, almost in unison. Independently, each decided to remain in Israel an extra year and study at Tel Aviv University. In the spring of 2014, both received Master’s degrees – Samantha, in Middle Eastern Studies, and Ben, in Security and Diplomacy Studies.

When the couple returned to the U.S., they began a new chapter. Samantha accepted a position with the Jewish Federation of Greater Washington as Development Officer in Women’s Philanthropy. Ben began working as an analyst for Blackboard, an educational software and technology company.

On Jan. 16, after dinner, Ben brought out a cake box. Of the two, he’s the cook, so Samantha assumed that he was just serving dessert. Instead Ben pulled out an engagement ring.”I didn’t see it coming,” says Samantha. “I can’t imagine being with someone who doesn’t understand my experiences in Israel. I can’t imagine not being with Ben,” she said.

Samantha and Ben are to be wed in Richmond, Virginia on September 25, 2016. Mazal Tov.