What was it about Michael Levin that turned a 5’6, twenty-two-year-old from Philadelphia into a larger-than-life hero of the Jewish people? What was it about him that inspired so many people to leave their friends and family behind and join the IDF?

His smile and personality were infectious. He was warm, fun, determined, stubborn, and unstoppable when he wanted something. The memories of Auschwitz that were instilled in him by his grandfather fueled his deep passion for Israel and Judaism.

Michael was caring and determined, but in many ways he was ordinary, at least by Israeli standards. Many of Michael’s friends also left their homes behind and joined the IDF. At his young age, there wasn’t much about his accomplishments that clearly set him apart from the rest. He served in a regular battalion: Paratroopers 890 division. He was not selected for Commander’s Course, Sniper’s School, or for any special training. He was a basic foot-soldier doing his small part. But it was his ordinariness and likability that made him so relatable to the next generation of lone soldiers. Michael really was just like them. If he could do it, so could they. If he could overcome obstacles, they could too.

“It was precisely Michael’s ordinariness and likability that made him so relatable to the next generation of lone soldiers.”

At least, that’s how Avi L. felt. The similarities between Avi and Michael are striking: both young men came to Israel from Philadelphia after high school. Both attended Camp Ramah, were involved in USY, ran track, and spent time in Israel during high school. Avi is warm, outgoing, fun, popular, and loves pranking his family and friends – just like Michael did.

Avi learned about Michael’s story during his high school Israel experience on the Ramah High School Program (TRY), when he visited Michael’s grave. From that point on, the screensaver on Avi’s computer was of Michael’s resting place on Mount Herzl. He returned to America and announced to his family that after high school he would be deferring college to join the IDF in Paratroopers 890, the unit in which Michael served.

Avi, who indeed fulfilled his mission and served in 890, never met Michael personally, but he has volunteered at the Lone Soldier Center, founded by Michael’s parents, Harriet and Mark, in his memory. To Avi, Michael was a visionary who, because of the difficulties he experience as a long soldier during his time in the IDF, dreamed of a place for other lone soldiers to find community, friendship, and support. 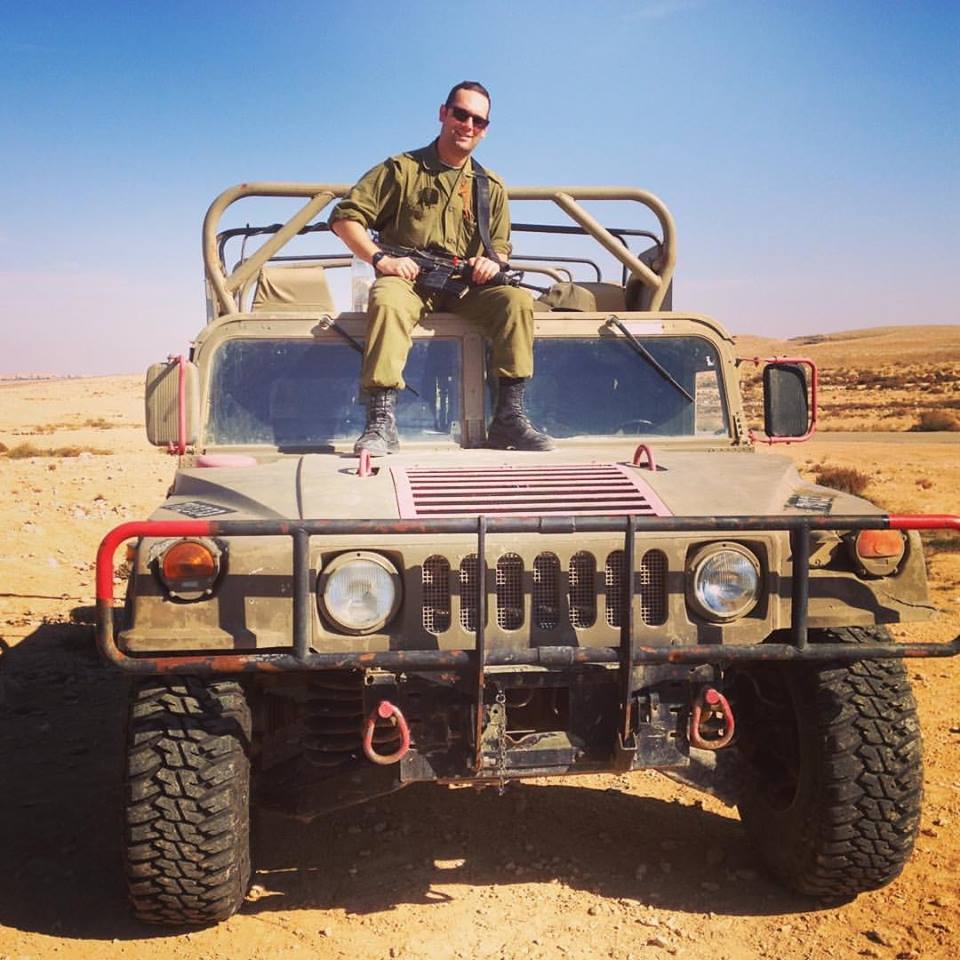 Eric S. on an IDF tank during his service. Courtesy of The Lone Soldier Center in Israel

“For me it isn’t necessarily what the Center does but who the Center is,” Avi says. “It’s a place where you feel at home. When you have time off, you don’t want to go back to an empty apartment. People come to the ‘Centers’ [in Jerusalem and Tel Aviv] straight from the bus and they re-energize, they eat Shabbat dinner and spend time with a hundred of their best friends, other lone soldiers like them.”

Avi finished his IDF service in June and now volunteers at the Center. He was trained and joined the volunteer advising team. “When people come in, I try to make them feel welcome, like they’re back home.”

Hannah E. watched a documentary about Michael, called A Hero in Heaven, by Sally Mitlas, while in high school in Australia. The Sydney native attended religious Jewish day schools but didn’t learn much about Zionism or Israeli history. She learned more through Bnei Akiva and considered joining the IDF after completing high school. Many tried to dissuade her, telling her it would be too difficult, but after watching A Hero in Heaven, she was convinced she could do it. “She recalled that “there is a story in the movie about how Michael wanted to join the army so badly that, after first being rejected, he climbed into the drafting office through the bathroom window in order to get a meeting with the drafting commander. It made me think, ‘Don’t listen to everyone. Don’t let them tell you no.’”

Hannah’s eyes glow when she talks about her army service. She has been serving in the Search and Rescue Unit for 14 months, trained to rescue people from collapsing buildings, chemical attacks, and natural disasters. She is solid, grounded and focused, and she can’t stop herself from smiling when she talks about her life as lone soldier living her dream.

She points to the blue bracelet on her wrist, which reads: “Lone Soldier Center in memory of Michael Levin,” which she wears all the time. “It is a sentimental piece that reminds me why I’m here… and who I am. It reminds me that even though I don’t have a say in the army, my say was doing the army.”

Eric S. was active in USY, spent multiple summers at Camp Ramah, and participated in the NATIV gap-year program. Like Michael, Eric was also the grandson of Holocaust survivors and felt the need to protect the Jewish people. Eric knew the Levin family from camp and USY. The last time Eric saw Michael, the Second Lebanon War had just broken out. Michael was on a month-long break from the army to visit his family in Pennsylvania. He spent a day at Camp Ramah talking to his friends and the campers. Eric had a taste of the IDF when he did Gadna, an army preparatory program, as part of a USY summer program. He knew he wanted to join the army but hadn’t made his final decision. Michael told Eric, “If this is something you really want to do, you should do it. You’ll have time to go to college after.” Avi was inspired by Michael’s story to join the IDF. Courtesy of The Lone Soldier Center In Israel

“The last thing he said to me,” Eric recalls, “was ‘I’ll see you in Israel.’ The next time I saw Michael was at his grave site on Har Herzl.

A few days after Michael had visited with Eric at Ramah, he cut his trip short and returned to Israel to join his fellow soldiers. Eric said the reality of Michael’s death made him realize he wanted to make aliyah and join the army, “not just for myself but for Michael’s legacy and for honoring that legacy.” He deferred his college acceptance and went to NATIV with no intention of coming back to the United States.

In the end, Eric fell ill and wasn’t able to stay in Israel after NATIV. He came back to the America and studied at Columbia University. In the meantime, making aliyah and joining the Israeli army were off the table. Eric channeled his energy into Israel activism on campus, got involved with Stand with Us and AIPAC, and even won AIPAC’s Student Advocate of the Year Award in 2012. By the time he had finished his degree, his health had improved dramatically. He decided to finally go back to Israel and fulfill his dream of serving in the IDF.

At this point, persuading the IDF to accept him wasn’t easy. But in 2014, Eric finally got drafted into an intelligence unit. “It was the happiest day of my life,” he says. He has been serving for three and a half years. And is now an officer, a First Lieutenant, and will be promoted to Captain this summer. “I have accompanied Maccabiah and Birthright trips to Har Herzl,” Eric says. “I go in uniform, and I tell Michael’s story and my story. He wasn’t just an inspiration to me, he was an inspiration to hundreds and thousands of soldiers.”

Michael’s parents say that each year on Israel’s Memorial Day, they meet hundreds of people at Mount Herzl, part of the crowds surrounding Michael’s grave. Each one has a story about how he or she made aliyah, joined the IDF, decided to stay in Israel, or overcame one obstacle or another “because of Michael.”

Mark says, “To us he was a proud Jew who simply heard the call and heeded it, who honored his dream by following it, and fulfilled his destiny by living it. Thanks to Michael, hundreds of young people have moved to Israel to become lone soldiers and protect the Jewish people.”

Sara Kalker is activities coordinator for the Lone Soldier Center in Israel.