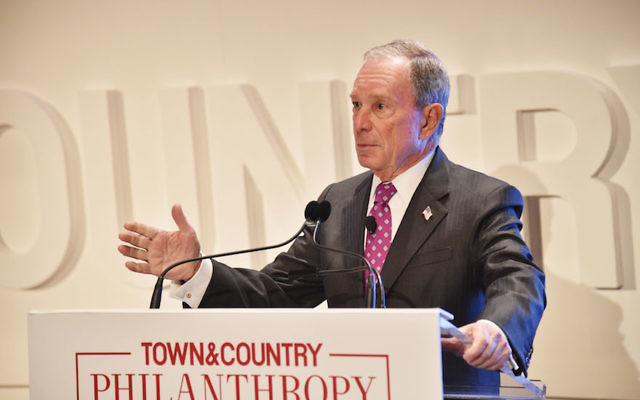 President Donald Trump announced on Thursday that the U.S. will withdraw from the landmark 2015 agreement to fight climate change, signed by every country except Syria and Nicaragua. Trump said the U.S.’s obligations under the accord hurt American business, and that it is “very unfair at the highest level to the United States.”

Bloomberg’s donation will make up for the U.S.’s contribution to the U.N.’s Climate Secretariat, which aids countries in implementing the agreement. Bloomberg — who is the world’s 10th-richest person — serves as the U.N. Secretary-General’s Special Envoy for Cities and Climate Change, and he has long advocated aggressive climate measures.

As part of his U.N. role, Bloomberg is organizing American states, cities and businesses that have pledged to meet the Paris accords’ goals without the federal government’s help. So far, according to The New York Times, the governors of New York, Washington and California have signed on, as well as the mayors of 30 cities — including Los Angeles, Atlanta, Salt Lake City and Pittsburgh. In addition, 100 businesses, including Hewlett-Packard and Mars, have joined the effort, as have the presidents of more than 80 universities.

“Americans are not walking away from the Paris Climate Agreement,” Bloomberg said in a statement. “Americans will honor and fulfill the Paris Agreement by leading from the bottom up – and there isn’t anything Washington can do to stop us.”

The Bloomberg group plans to submit its own independent commitment to the Paris accords, but it is unclear how that would work. The accords are not designed to include “non-state actors” like local governments and companies.

However, former U.N. climate official Christiana Figueres told the Times that it is possible that the Bloomberg group’s submissions could be included in future U.N. reports on the progress made by the countries signed on to the Paris deal.

“The bulk of the decisions which drive U.S. climate action in the aggregate are made by cities, states, businesses, and civil society,” Bloomberg wrote in a draft letter to U.N. Secretary-General Antonio Guterres. “Collectively, these actors remain committed to the Paris accord.”